Deep within the Driftmier Engineering Center at the University of Georgia, past the classrooms and offices, beyond the student study rooms, and behind the metalworking, woodworking and machine shops sits a garage with two cars and a whole lot of stuff. This is home to the University of Georgia’s ChampCar team. In collaboration with the UGA Formula SAE team, they make up UGA Motorsports.

And this club is pretty new on campus. UGA Motorsports started in 2014 as a group of automotive enthusiasts who wanted to make it official. Student Sam Hepburn reached out to a professor, and several other students came forward with interest. Dr. John Mativo, associate professor in workforce education, stepped in as their faculty sponsor, and they officially formed the Society of Automotive Engineers at UGA.

Then, club member Ahnna-Leisha Stover donated her old 1999 Ford Mustang. Suddenly the group had direction as it began to work on the gifted car. Shop nights were hosted to teach other students about automotive engineering.

Another Mustang was donated to the club by one of its faculty advisors, Dr. Mark Trudgen, and the momentum continued. Members collected tools and equipment as they focused mainly on small jobs and hosting shop nights, funded in part by the engineering college and private donors. The students even hosted “Mario Kart” tournaments to raise money for their projects. Over the next few years, UGA Motorsports grew into a successful club that offers a practical way for students to apply their classroom skills.

From First Gear to High Gear

UGA ChampCar was funded in the same way: with a proposal to the college from Emerson Delonga, head of communications for the team. It was approved with just three weeks to go before the AMP’d Up Duals, a ChampCar enduro scheduled for October 2019 at the Atlanta Motorsports Park in Dawsonville, Georgia.

The team spent $6500 over two and a half weeks to prepare its Mustang for the competition–plus three all-nighters to finish things up. That’s not a lot of time to fully outfit a race car, Delonga notes.

They didn’t rank well in their first competition, but they did make the big show. Robby McCool, head mechanic, stayed up until 5:45 that morning making sure everything was ready, but he eventually had to get some rest since he would be one of the drivers the next day.

“We passed tech on our very first attempt,” McCool says. “We were very thorough when making sure that everything on the car was as safe as it could be, and it was so exciting that we were able to put a car together that passed tech on its first try.”

The UGA team was the only college team on the track that day, but ChampCar has been reaching out to colleges and universities to get students to join up and compete. McCool notes that for student engineers, especially mechanical engineers, ChampCar provides a practical way for them to use their skills.

“Braking is friction, dynamics is suspension, so it’s all of the concepts that we learn in class, but we might never get it applied in this way until we get a job after graduation,” McCool explains.

Dr. Mativo, faculty advisor to the club since it formed back in 2014, has seen it grow to not only compete and race cars, but to bring many different types of engineers together to work toward a common goal and gain real experience in a significant field of engineering. 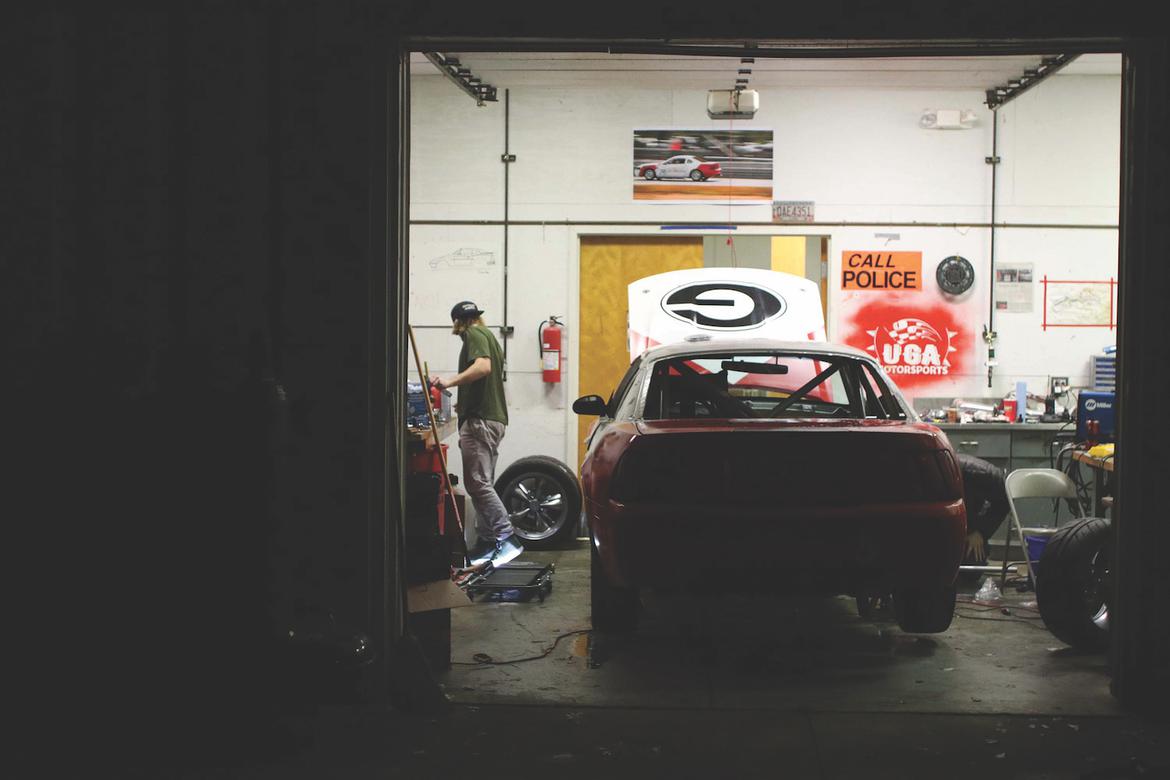 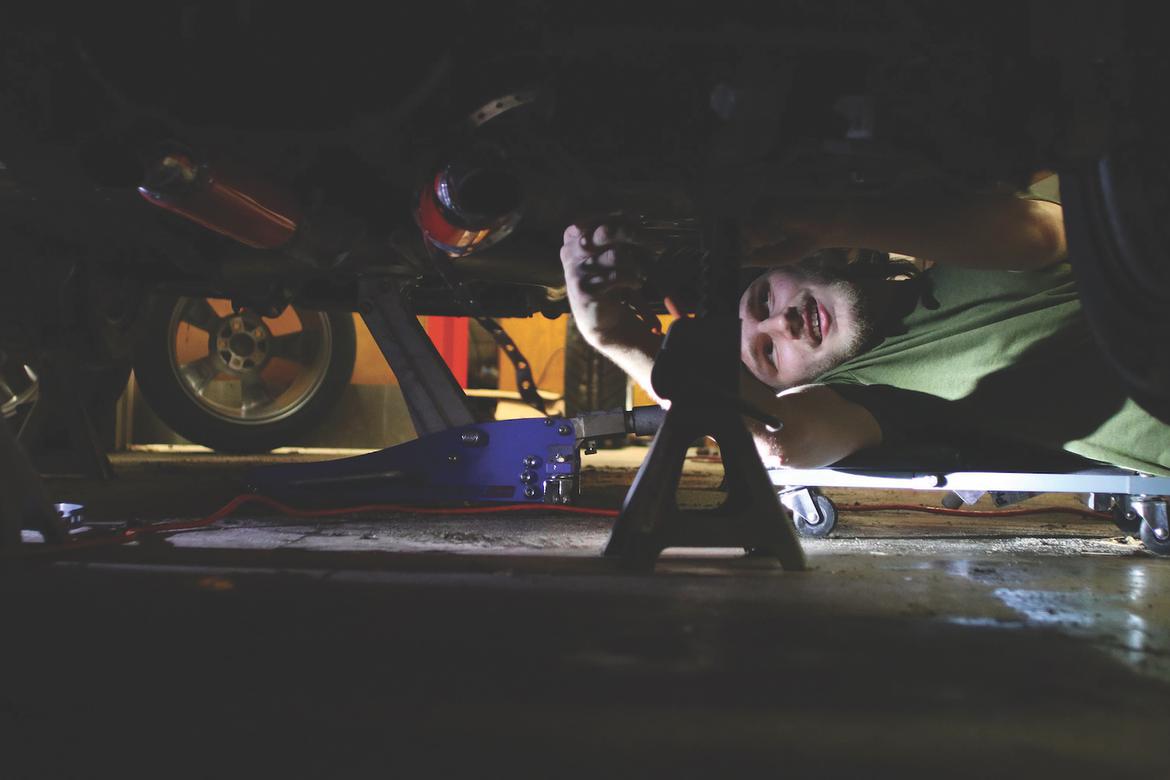 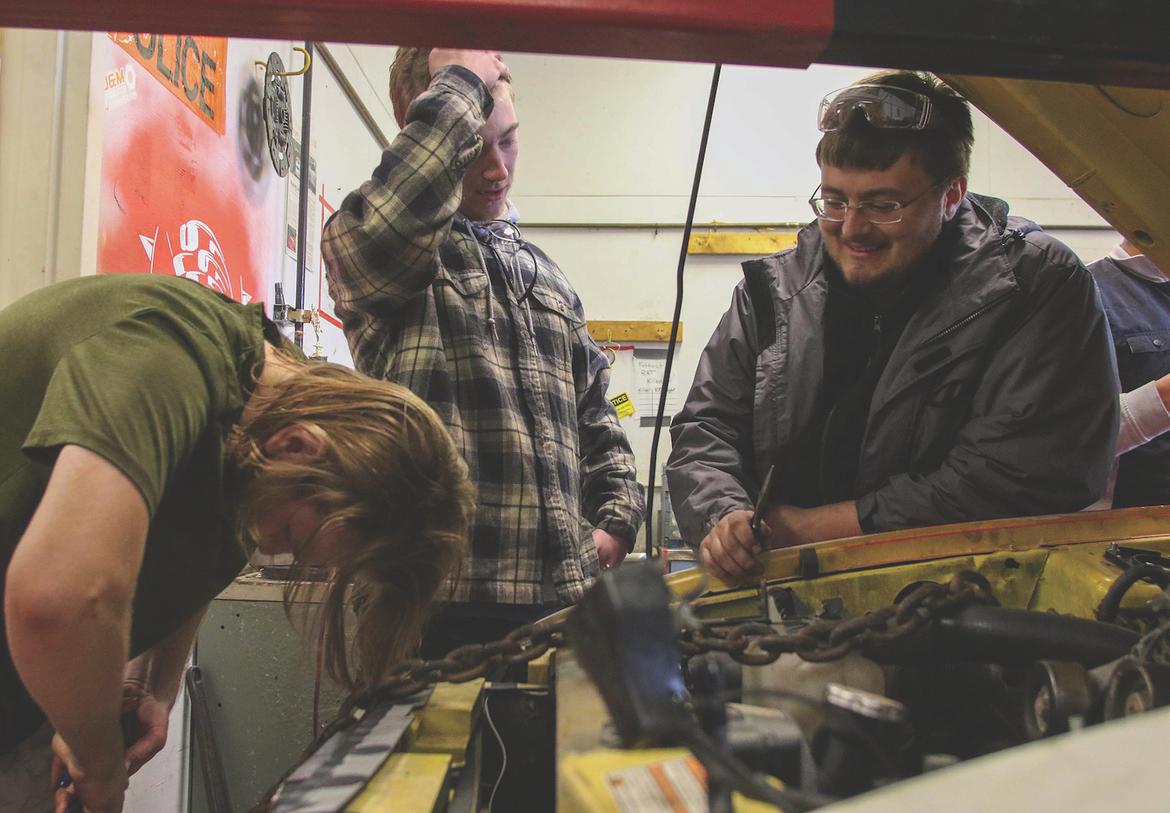 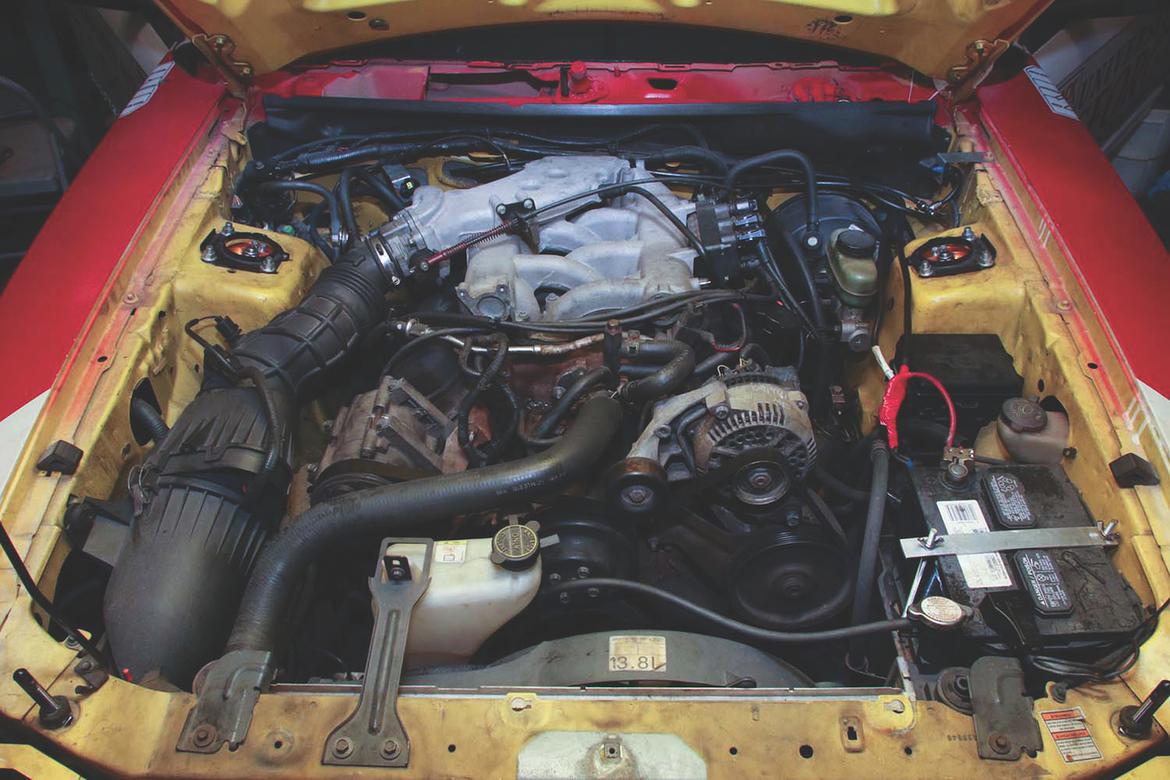 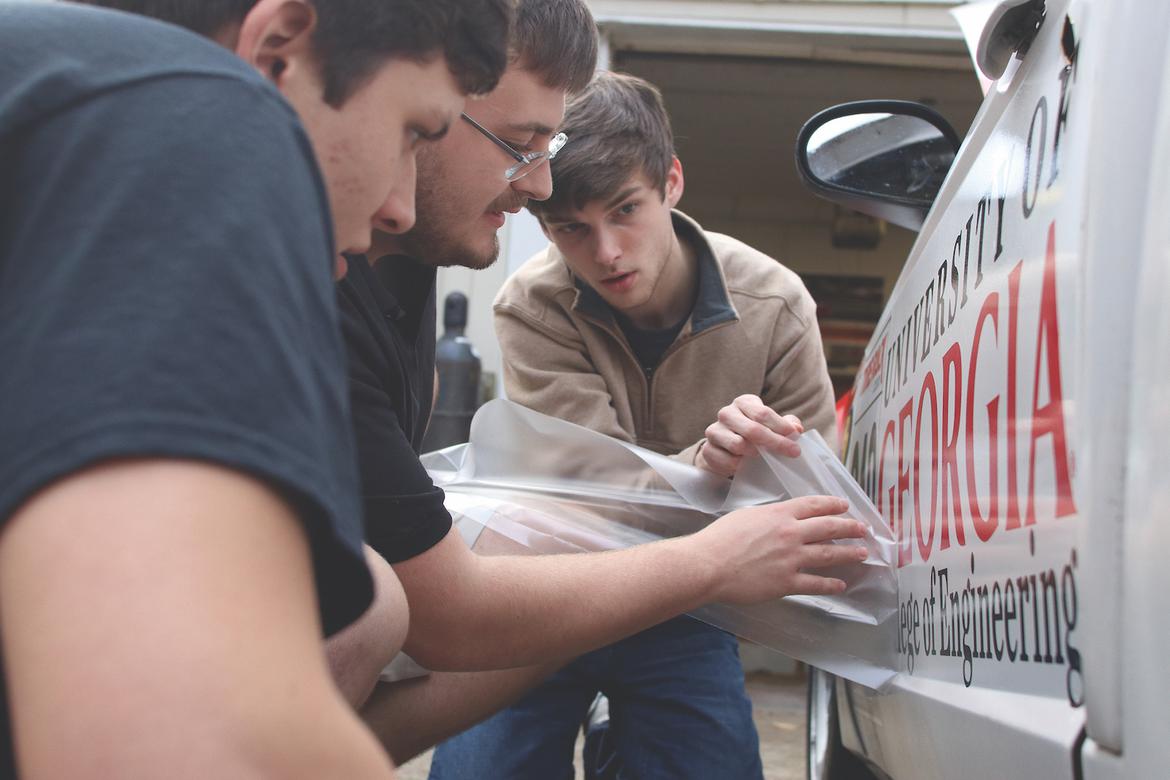 UGA ChampCar has a pair of Mustangs, a race car and a parts car. The team–shown pre-COVID–operates out of shop space located behind the engineering school. Photography Credits: Tristen T. Webb

Many of the students involved have learned how to apply their classroom-taught skills as well as make simple vehicle repairs. Clay Busbey, a mechanical engineering major, recently joined the ChampCar team and says he’s always been interested in working on mechanical systems. He was tasked with replacing the car’s suspension in preparation for that first race. The issue: Someone had incorrectly installed the struts.

“I’m a car novice,” Busbey admits, “but ChampCar gives me the perfect opportunity to combine my interests in mechanical engineering and ‘Top Gear.’”

ChampCar has begun to welcome school teams by offering free entry, normally an expense that ranges from $1000 to $3000. Bill Strong, the marketing director for the TireRack.com ChampCar Endurance Series, says participating high school and college teams must be part of a STEM program and run in their school colors. School teams should contact ChampCar CEO Michael Chisek at info@champcar.org. ChampCar currently has a dozen student teams racing with them this season, with Utah Valley University winning overall at ChampCar’s Utah Motorsports event in July 2019.

Strong believes that the UGA students did well at their first appearances and looks forward to seeing more of them. He says their car choice wasn’t great for a first-time race effort, but as an engineering exercise for students, it was a good one. 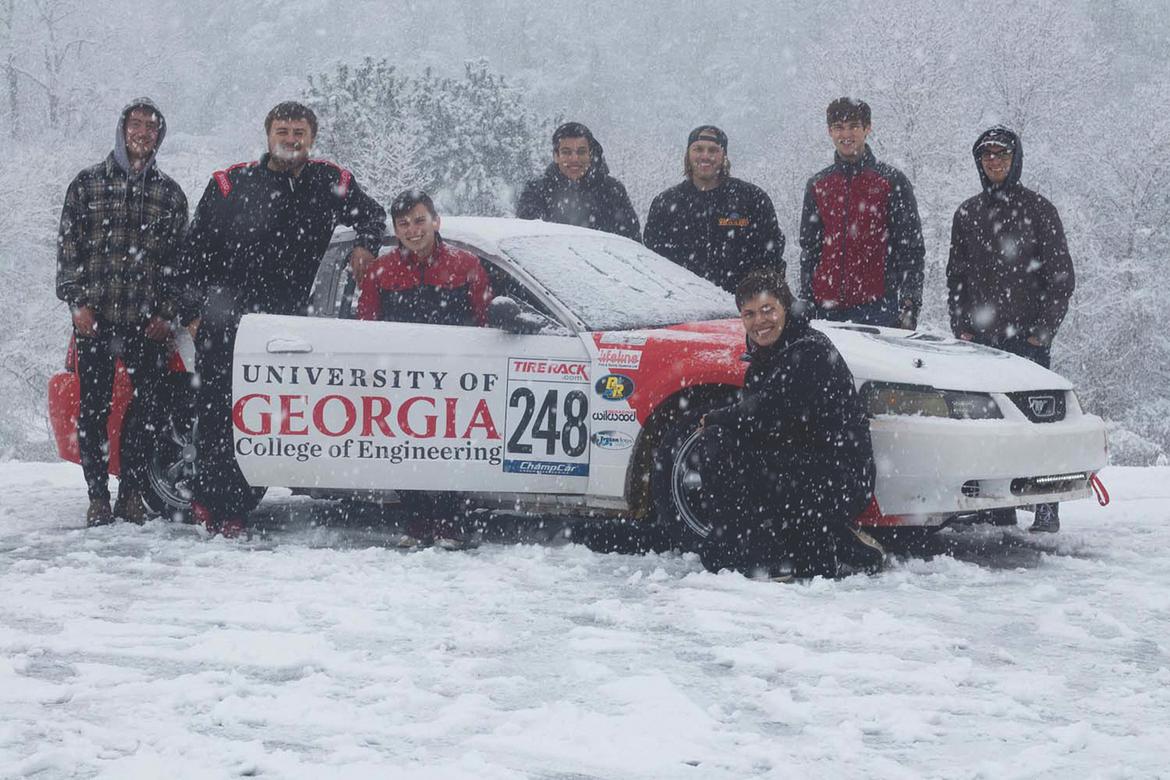 “Most good teams show up not really knowing what to expect for their first race,” he adds. “Endurance racing is hard. These cars were never designed to be driven this hard for as long as we drive them, especially when they are 20 years old.”

Work With What You’ve Got

While the team hopes to land an E46-chassis BMW or Nissan 240SX in the near future–donations are always welcome–in the meantime it’s been working on perfecting its current car, primarily regarding reliability and pit stop speeds.

Members have also started refitting their workspace, an old biofuel laboratory behind the engineering school. It’s a little cramped with all the leftover lab equipment, but over the past few months they’ve slowly been converting it into what they need and making it a home. They’d also like to eventually own their own trailer.

The school has been supporting the effort. Dr. Donald Leo, dean of UGA’s College of Engineering, came out to their first competition, spending a couple of hours with the students to see what they’ve been working on. They introduced him to some of the other teams visiting the race and showed him what ChampCar is all about. 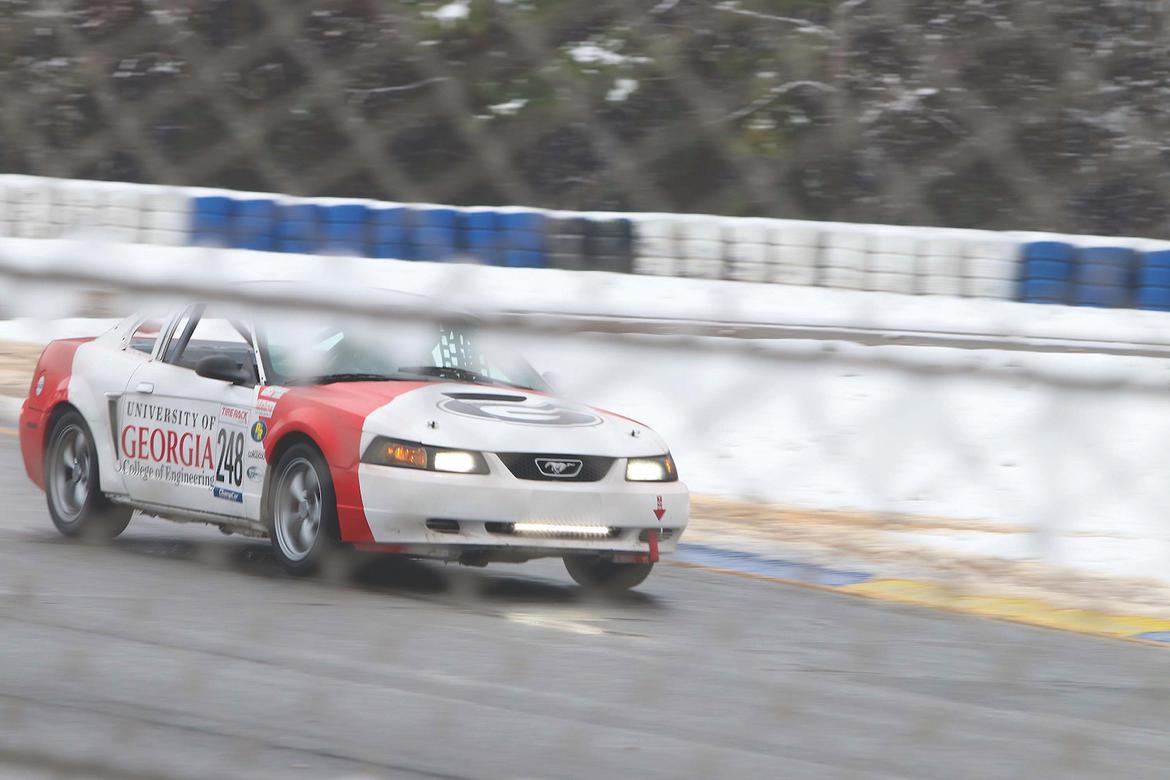 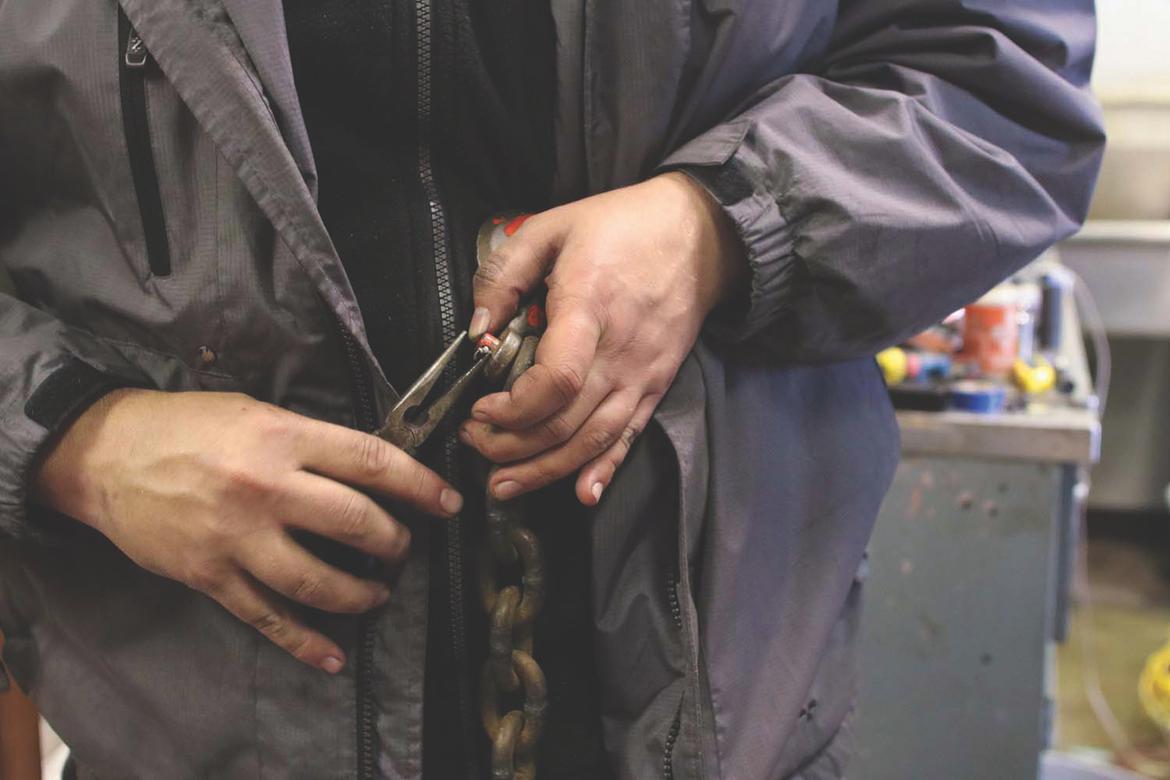 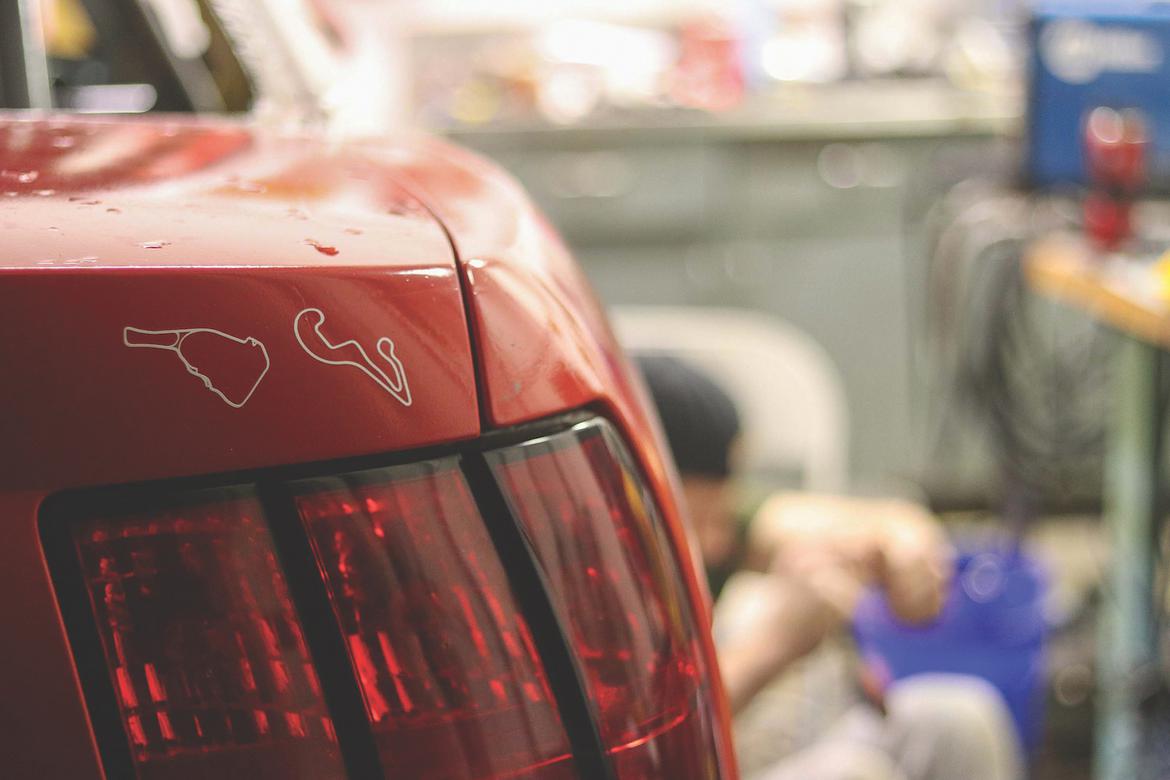 “It was really cool to see faculty there,” McCool says. “For all three days, we had at least one faculty member, sometimes two, come out and help. And they weren’t there to just stand and watch; they actually got their hands dirty and helped us out.”

The team made its second appearance in February: a 14-hour ChampCar enduro at Road Atlanta. There were still a few things to fix on the car, so everyone arrived early and got to work. The track was closed due to snow buildup from 10 a.m. to 3 p.m., which gave them plenty of time to get out on the track afterward and compete. Their times were slow, but it’s not always about the competition to them.

“I’ve been to ChampCar races and I’ve seen them go, but I’ve never really been in the team,” Delonga says. “To see motorsports bringing 20 people all together with a common goal of getting that car back on the track was so cool. It makes me want to get back out there again–not even as a driver, but just as a team.”

UGA Motorsports also boasts a Formula SAE team under its umbrella. This was the first team to start with UGA Motorsports, getting its project approved by the dean in the spring of 2018 and starting its designs just a few months later. Over the next year, the students worked hard on their formula car to prepare it for their first competition in Lincoln, Nebraska, learning from the already established FSAE team at Kennesaw State University along the way.

Like ChampCar, FSAE allows student engineers to put their learned skills to practical use. Each team works on a different part of the car, coming together when their specific piece is finished to work it into the build as a whole. After the vehicle is assembled, the team works collectively on modifications to improve it for the driver and for the road. 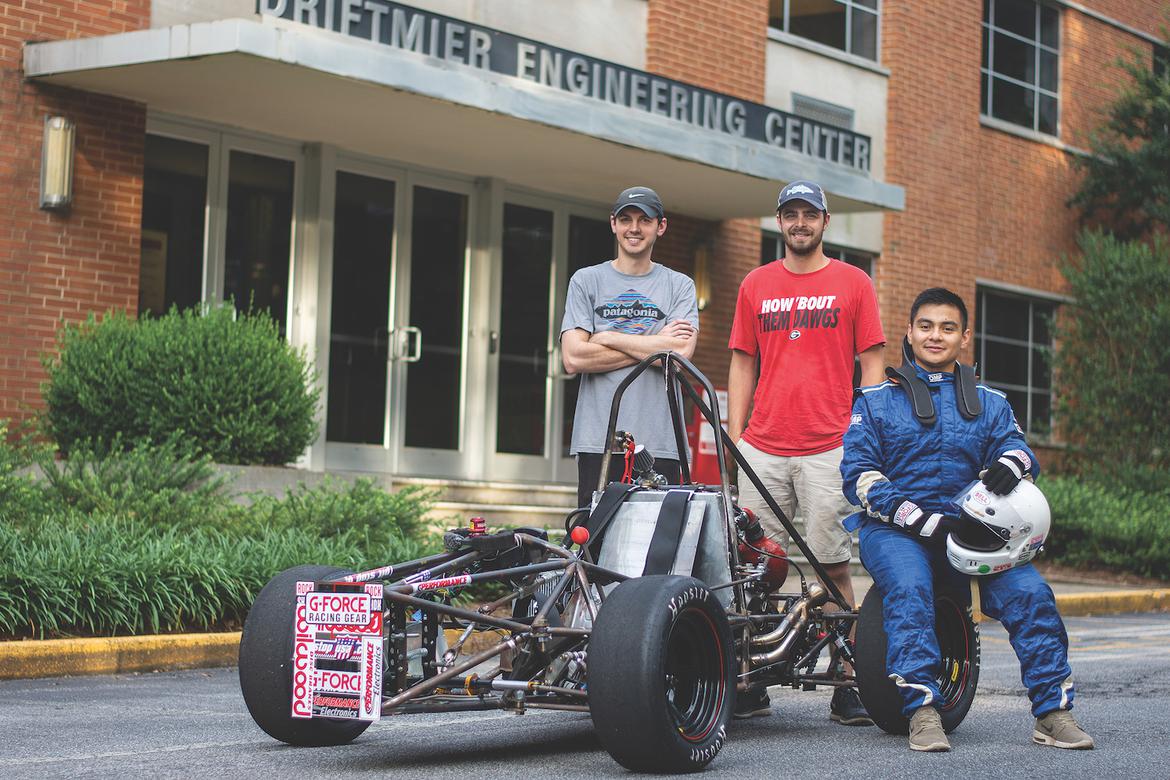 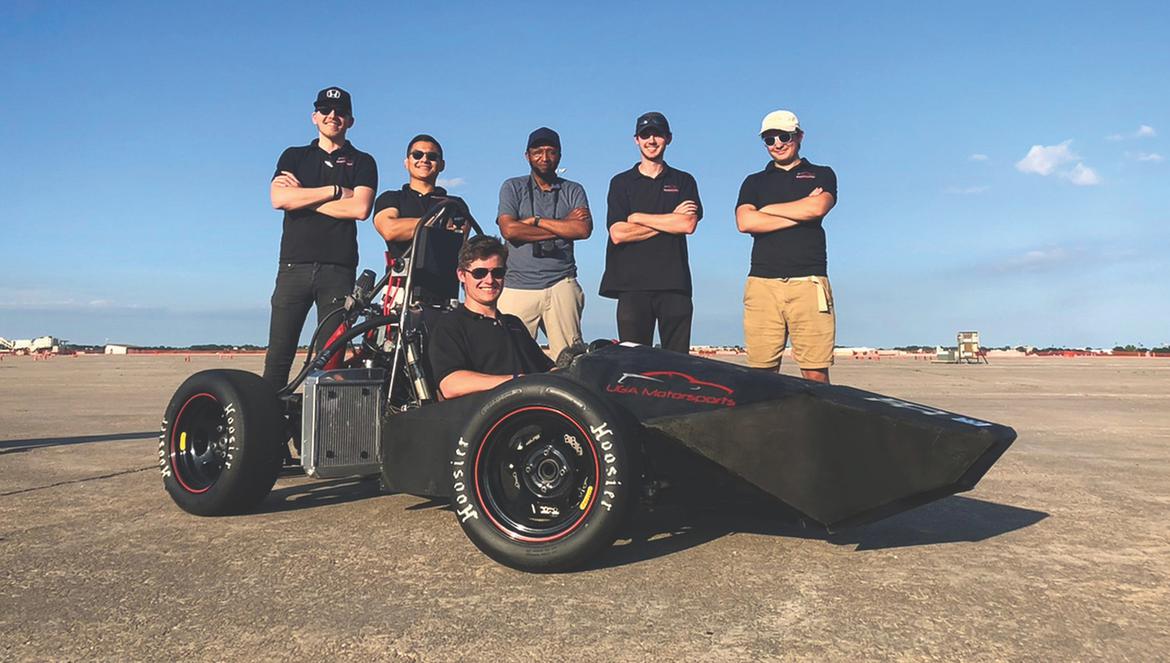 The University of Georgia’s engineering school opened in 2012. Two years later, it had a motorsports program. The team’s other big effort surrounds Formula SAE, a mainstay among engineering schools since 1980. Photographs Courtesy UGA Motorsports

FSAE isn’t just for engineers. Sydney Higginbotham, a biology and Spanish major, serves as the team’s president. Although her experience with cars is minimal, she works to make sure that the team is on track with its budget, business presentation and cost reports.

“I have the expertise,” says Higginbotham. “I don’t want people to think that just because they’re not [an engineer], that means they can’t join.”

REVEALED: The F1 team bosses choose their top 10 drivers of 2022

How to effectively plan a motorsports event | Articles