Is Bigger Always Better When It Comes to Wheel and Tire Packages? | Articles

[Editor’s Note: This article originally ran in the May 2012 issue of Grassroots Motorsports.]

Why order fun-sized portions when supersizing costs only 9 cents more and contains 3100 more life-sustaining calories—plus a bonus pig haunch? You’d be crazy not to upgrade, right? It’s the American dream.

Maybe bigger isn’t always better. Can upsizing your wheel-and-tire package actually downgrade your car’s performance? We hit the test track to find out.

Back in a simpler time we called the 1980s and 1990s, wheels were smaller. We all sat around in silent wonder when they put 16-inch wheels on Corvettes and Camaros, thinking, “Certainly man has reached the physical limits of the wheel-and-tire universe.”

At the time, most of us were running around in our linen sport coats and sockless loafers with 13- or 14-inch wheels on our Civics or MR2s. We thought we were pretty cool, but every time we opened one of our favorite magazines, we’d see an easy way to become even cooler: Switch to plus-sized wheels and tires.

This upgrade capitalized on the burgeoning supply of low-profile tires available at the time, and the recipe was simple: Maintain the overall rolling diameter of the wheel-and-tire assembly, but increase the wheel diameter while decreasing tire sidewall. A shorter diameter would theoretically improve performance, while maintaining the tire’s outside diameter would preserve the stock gearing.

The simplest upgrade was the Plus 0. Wheel diameter stayed the same, but the tire width increased while the aspect ratio decreased. When Goodyear launched the 205/55R14 Eagle VRS autocross tire, Civic, GTI and MR2 drivers shed their 185/60R14 rubber in droves.

From there, you could take the additional plunge and do a Plus 1 upgrade. A Plus 1 would increase wheel diameter by an inch and necessitate a further reduction in the sidewall aspect ratio to maintain the stock rolling diameter. Plus 2 was the next step, increasing wheel diameter by 2 inches, and was made even easier with the introduction of super-low-profile 40- and 35-series tires.

So that’s your little history lesson. You can take the Duran Duran cassette out of the player now.

But something happened on the way to the forum—the forum in this case being the 2000s. Car manufacturers, enticed by the prospect of higher performance and higher sales numbers, jumped on the plus-sizing bandwagon.

Today you can walk onto a car lot and buy an econobox with 17-inch wheels and 40-series tires, and that may not even be the upgraded wheel-and-tire option. As a result, 15-inch wheels have become as rare as 18-inchers were in 1995.

But has all this upsizing made the world a better place? Did we, at some point, blow past the ideal configuration and let our desire for larger and larger rolling stock take us too close to the sun?

Let’s find out, shall we?

We laid out a rather simple plan for a test: Compare two wheel-and-tire packages that were as identical as we could make them except for the wheel diameter. We’d use a car with a “modern-sized” set of aluminum and rubber and give it a “Minus 1” upgrade. Or downgrade. Or, um, sidegrade. We’ll see.

Our test subject would be our 2008 Mazdaspeed3, a car that rolls out of the factory on 18-inch alloys. Wheels of this magnitude were associated with the cars of pro athletes and rock stars until about eight years ago.

Our car had already received a small upgrade in the form of a set of 18×7.5-inch OZ Alleggeritas, and we’d use these as our modern-sized wheel baseline. For our Minus 1 setup, we picked up a set of 17×7.5 Enkei Fujin wheels. They weigh 16.8 pounds (vs. 17 for the OZs) and have a nearly identical offset (50mm for the Enkeis vs. 48mm for the OZs). In other words, they were as close as we could find to an identical yet smaller-diameter wheel. 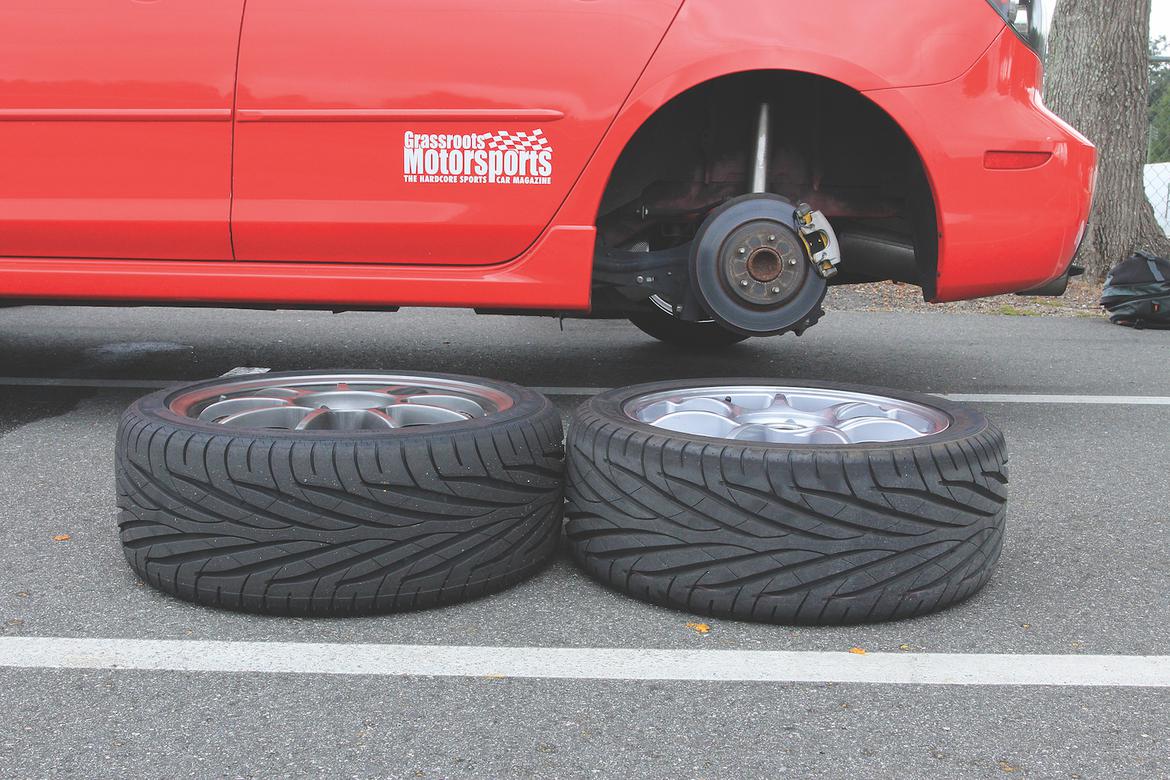 Next, we needed rubber to stretch over our wheels. We were quite happy with the 235/40R18 tires that we’d been running on our 18-inch wheel package, so we chose them as our modern-sized tire baseline.

The rubber for this exercise would be the new Maxxis MA-Z1 ultra-performance tire, which comes in the perfect sizes for this back-to-back comparison. The 235/40R18 MA-Z1 tires we slapped onto our OZs were 25.5 inches tall and 9.7 inches wide, while the 235/45R17 tires fitted on the Enkeis were 25.3 inches tall and 9.4 inches wide—well, that’s according to the spec sheet.

Our own measurements revealed the installed width to be closer than that: The 17s were barely 2mm narrower than the 18s. In fact, it was hard to see any difference with the naked eye. Also fabulous: Each wheel-and-tire combo checked in at 43.6 pounds.

Next came the grunt work of our experiment: Mount each set of wheels and tires, run some laps on our test track, switch sets, and repeat, repeat, repeat until we came to our epic conclusion.

We’ll spare you the play-by-play about bolting on each wheel and just get to the part you were probably going to skip to anyway. Yes, one set was conclusively faster. It was close, but after a few rounds of blind and non-blind testing, the 18-inch setup was slightly faster than the 17-inchers in both average times and fastest times.

Why was bigger better? Let’s look a little deeper into the numbers for some clues. The 18-inch setup, with its shorter and stiffer sidewalls, took about one lap to “come on” and produce the fastest lap on our multi-lap runs. After that, heat gradually prevented the tires from producing proper traction, and by lap five performance fell off noticeably. With the 17-inch setup, the times peaked around the same point—after a single warmup lap—but fell off much more quickly after that.

Subjectively, the 18s and 17s were nearly identical in most regards. If you pressed us, we might say the steering response seemed sharper with the 17s, but we’d never testify to it in court.

One thing we would say under oath is that the setups differed in steady-state traction. On the large, constant-radius, 180-degree corner that anchors our kart-based test track, the 18s and the 17s were like night and day, with the 18s clearly having more ultimate and more manageable steady-state grip. The times were close, so we imagine the 17s fell short due to slower speeds in this long sweeper.

Okay, so why go with the larger tires?

Well, mostly for the same reasons tire-marketing folks list when they try to sell you the bigger wheel-and-tire package. Less sidewall means less sidewall deflection. Less sidewall deflection means more of the contact patch is being managed by the suspension and not by the de facto spring created by the squirming tire. More squirm means more contact patch deflection, heat buildup and hot spots, which we clearly observed in the way the performance of the 17-inch package fell off so much faster.

So we answered the speed question, but that doesn’t mean we’re ready to crown a winner just yet. There’s another factor that must be considered, and that’s the cost-benefit ratio. 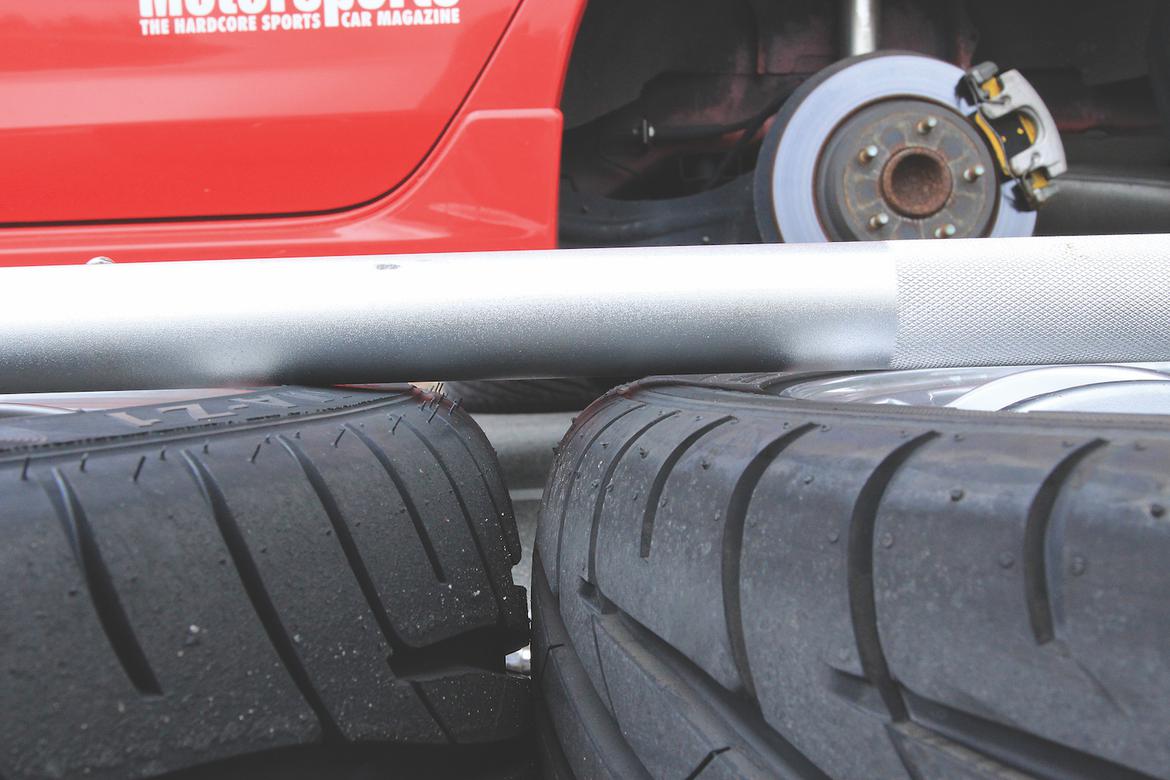 The wheels, however, have a bigger price gap. A 17-inch set of Enkei Fujins like the ones we used will run you $180 each from Tire Rack. The 18-inch versions of the same wheel are $225 each. If you want to pick up the same OZ Alleggeritas we used, be prepared to pay about $388 each for each one. Just scan the various listings of wheel prices, and you’ll see that the 18-inchers carry a premium of at least $20 per wheel—and in most cases more like $40 to $50—over the 17-inchers.

Progress marches on, bigger is better, and marketing is based on truth. We may not have proved these statements across the board, but we provided some evidence that—in this case at least—there’s more to the trend of larger, lower-profile rubber than just hype.