What happens after work at Honda? Some go race–and win | Articles

Team Honda Research West campaigns the company’s Honda Civic Si at races across the country. Don’t mistake it, though, for a traditional “factory-backed” team.

Sure, Honda provides the cars and related Honda hardware. But the rest of the bolt-on components–tires, safety equipment, dampers and the like–are on the team’s dime.

The same goes for their time. If they want to work on …

Many Honda facilities have clubs, including those that revolve around motorsports. In California, their race club publicly calls themselves Team Honda Research West. Within the company, THRW is known as simply the “associate race team.”

The history of THRW dates to 1996, after employee Matt Staal returned from a stint working on a project in Japan. Across the Pacific Ocean, Matt discovered Honda’s all-volunteer Team Yamato.

He suggested to Honda’s then-CEO in the U.S. that he hoped to start something like Team Yamato here. The CEO gave the club the green light. They started with two guys, an Acura Integra and an open trailer.

“There are a lot of associates who are car guys,” says Lawrence Hwang, a designer at Honda, a member of THRW since 2005, and the club’s de facto leader. “It gives regular people with motorsports interests a chance at racing on tracks.”

Now, 26 years later, THRW attracts Honda employees from across the country–California to Ohio to Georgia. In 2019, associates from around the world–Japan, Canada, the U.K. and the U.S.–helped the team’s effort at 25 Hours at Thunderhill.

Corey Taguchi, who works in field sales with the Powersports division, used to be based out of Honda’s California’s offices. The company moved that division to Georgia, where Corey now works. Now, he’s taking what he’s learned out West and applying it on the East Coast.

“We have a service training shop that we’re using as our East Coast shop,” Corey says. “A lot of the guys on the West Coast dreamed of racing the tracks here. This year we were able to race Road America, VIR and Road Atlanta. Part of that effort has been myself and Weston Walter, who works for [Honda’s] finance company. We have old training cars from out West here now. That’s building more camaraderie here among newer members.” 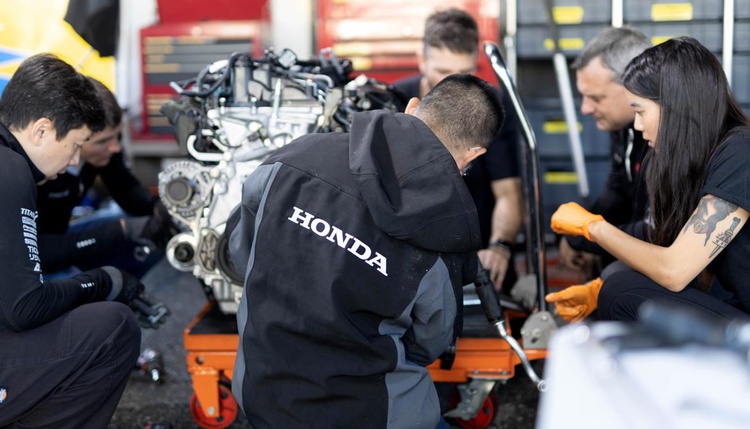 Multinational corporations spend tons of money on consultants and seminars to help foster teamwork. However, at Honda, what better way is there to build connections among its widespread company than through what they build?

“Usually when you work for a bigger company, you’re pigeonholed to a little section,” Lawrence says. “This is the cool part: Anybody can join the team as long as you work for Honda as an employee. The team consists of everyone you can and cannot imagine. We have a finance credit manager, people in advertising, people of various backgrounds. People learn more about the cars.”

Colin Maruch designs vehicle interiors for Honda. He says the experience with the team affected how he performs his day job.

“This is one of the funny things–the first thing you do when building a race car is get rid of the interior,” says Colin. “It was a good learning experience for me, taking those interiors apart. Seeing how things go together makes me a better designer.”

Furthermore, the club helped him make connections with people from other segments of the corporation.

“I’ve met people from other parts of Honda that I wouldn’t have met otherwise,” Colin says. “It helps out with work. If I have a question, I now know all these other people who can help me out.”

Regardless of where they come from within Honda, THRW provides its members a taste of many aspects of the business through the club.

“With a race team like this, you discuss things as a team,” says Lawrence. “We have a plan, and then we design it. We build it within a budget and we test it by racing it. That adds to job training. The associates’ morale is greatly boosted by being able to take part in this.” 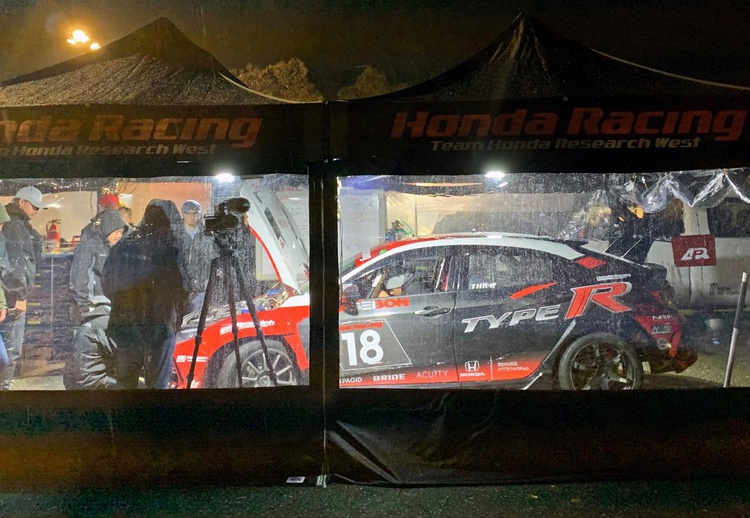 Certainly, THRW provides Honda with great publicity and enhances its image. Lawrence says team members must remain aware of that.

“For a lot of people, when they see the team out there, [they think] it’s a Honda factory team, but it’s not,” Lawrence says. “But you have to prepare and meet expectations. You’re holding the Honda banner, so you’ve got to watch what you say. You’ve got to be more organized so you don’t put the company’s reputation on the line.”

Honda has used THRW for marketing purposes. In 2005, at Thunderhill, the team helped debut the 2006 Honda Civic Si. After that, THRW played instrumental roles in the launches of the 2013 Acura NLX, 2016 Honda Civic Si and 2017 Honda Civic Type R. Nevertheless, the true public initiative of THRW goes beyond the car they race.

“The club is not there to say, ‘Hey, you guys should race the Civic Type R’ or, ‘It can do this or that,’” Lawrence says. “It’s more about displaying the racing spirit to the outside world and that our associates don’t just work here, we actually enjoy motorsport. We care about the stuff we build and design.” 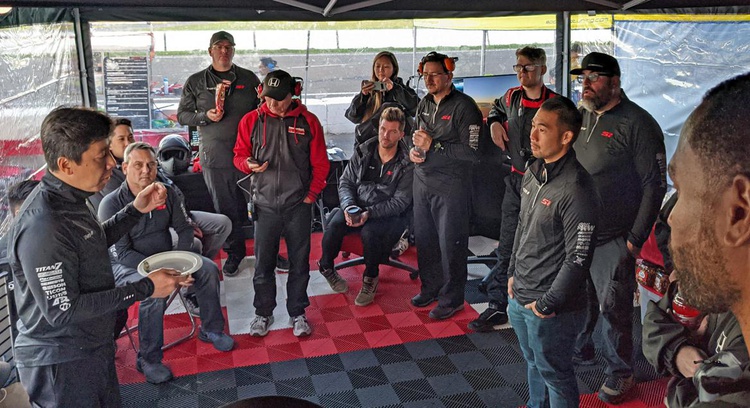 Lawrence again stresses the nature of THRW. “All the manpower is 100% voluntary,” says Lawrence. “People fly themselves out of their own pocket. We cannot accept any monetary support. We accept parts in exchange for promotion on the car.”

That volunteer spirit applies to the work in the shop. “There’s shop space assigned [at the Torrance, California, facility], shared with the other test teams,” Lawrence says. “During work hours, nobody’s there. At 4:30 to 5, people start to trickle in. People get together on Saturdays almost every week. Not everybody shows up all the time. As long as the project is moving along as planned, that’s okay.”

With THRW playing a role in product launches, the team requires coordination among everyone involved in the club. “April is the start of our fiscal year,” says Lawrence. “Near that time, the team will get together and we will discuss what the company’s doing in terms of new products. Last year, we knew we would be debuting the new [Honda Civic] Si at the SEMA Show. In April we started developing the chassis and the suspension, finding sponsors, talking with suppliers, coming up with a design, having a cage built, and testing the cars until SEMA, when we show it.” 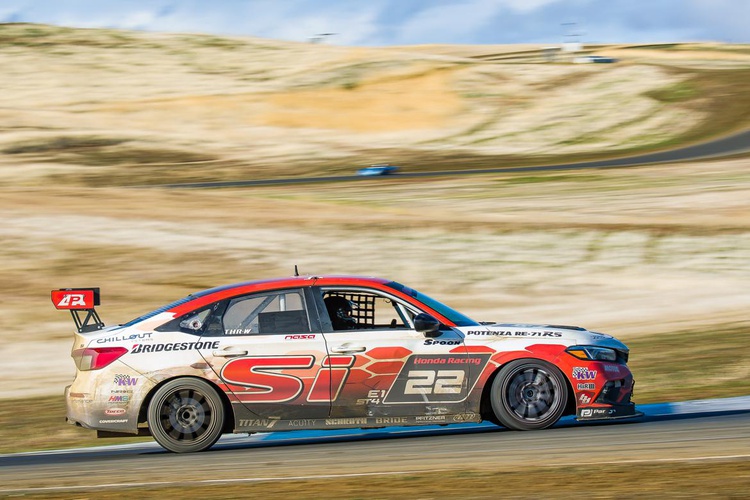 THRW finished one-two in their class at the 25 Hours of Thunderhill this year. Photo credit: Doug Berger/NASA

As far as the driver lineup, anybody can race for THRW. “If you want to be a driver, you can start with nothing,” Lawrence says. “You usually [start] first as crew and learn the racecraft.

“Then,” he continues, “you start using your personal car and the company car to do HPDE. Once you get to a certain level, you can go to racing school. After you get your racing school credential, you get a provisional license. From there, you can start racing entry-level races, such as the ChampCar races, and then move up. There’s always a path based on an associate’s interests. Some people come in and they don’t know how to use a screwdriver. You can always learn something from each other.”

Colin Maruch came to THRW fairly green. “I had never been on the track before I joined the team,” Colin explains. “My racing experience was all digital–PlayStation and Xbox. I started out helping out in the shop to learn about the cars and how to build things.”

Iuliana Iuras was born in Ukraine and raised in Italy. She moved to the U.S. to pursue a master’s degree and then started working for Honda in the customer experience area of marketing last September. She discovered the team through Honda’s AVP of Customer Experience, Sage Marie, who worked with THRW previously.

“He mentioned about the team, and I’m also passionate about motorsports,” Iuliana says. “Out of curiosity, I checked out what those guys were doing in the shop. I showed up one morning and stayed there for like 8 hours working. It was fun.”

Iuliana said the team welcomed her despite her being the only woman there at the time. “I’m very grateful for the team to be so inclusive, because it’s a male-dominated sport,” she says. “Recently, another girl showed up, and she’s showing interest. Everyone is so supportive. They’re always open to teach me something.”

That extends to driving, which Iuliana is now learning. “One of our team members, Mike Tsay, is coaching me with driving,” Iuliana says. “The goal is to get a racing license. I don’t know when yet. I’m not in a hurry because I’m enjoying the shop activities. If you told me a few years ago that I’d be doing this, I’d say you’re crazy, because racing is a pretty expensive sport. I’m extremely grateful for what Honda is offering us.”

Ultimately, Team Honda Research West proves that car companies do employ “car people,” and its members are happy to share their love for Honda and motorsport.

“A newer member was like, ‘I finally figured out what this is,’” says Lawrence. ‘[They said,] ‘It’s a bunch of crazy people surrounding themselves with other crazy people.’”

TEAM GUIDE: The essential lowdown on Italian team AlphaTauri as Tsunoda and De Vries prepare for 2023