Dave Scholz’s friends tell him he’s lucky when it comes to acquiring Datsun Z-cars, and it’s easy to see why. Not one, but two classic 240Zs have wandered into his life with minimal effort on Dave’s part—and for very little cash.

“My first Z came to me by luck,” he explains. “I had brought a magazine from Japan called Nostalgic Hero along to work with me one day that had an orange Z on the cover. I left it sitting on my desk. Someone noticed and said, ‘I think my neighbor has one of those lying around. Give him a call.’”

So Dave did just that. The owner was an older Japanese gentleman, and the two immediately hit it off. “By the end of our conversation, he had decided to gift the car to me, and unbelievably, by the next day, I had a beautiful green ’72 240Z in my garage,” says Dave, who to this day still can’t believe his luck.

While he’s owned a variety of cars over the years—everything from CRXs to a BMW 335i has passed through his garage—Dave has an affinity for ’60s and ’70s classic cars. “I keep coming back to my love of vintage cars, the visceral sensation of cranking up a triple—carbureted motor, the smell of racing fuel and brakes heating up.”

Granted, the free Z wasn’t ready for the road when he got it, but it wasn’t far from streetworthy either. “All it needed was a new transmission and off it went,” he says. “I enjoyed many years with that car.” Unfortunately, Dave’s financial situation began to deteriorate some time later, so he sold the Z to a good friend, who is also an avid Datsun enthusiast.

“A couple years later, I decided finances were better and I wanted to get another Z,” Dave continues. “I checked the usual spots—craigslist, the whole deal. Nothing seemed right.” The search continued, though it had become somewhat casual by that point. Then, one day in October 2009, Dave received a forwarded email from the same friend who bought his first Z. “The email had no details at all—simply, ‘Car for sale. Moving back to Japan,’” says Dave. “There were some attached photos of a faded red 240Z with a battery charger cord coming out of the hood and—oh, of course, a phone number. From the photos, I saw that it was a 1970, and I knew right away that I wanted it—badly.”

When he contacted the owner, it was again a friendly, older Japanese gentleman who was selling the Z. “We spoke for a few minutes and he gave me a price that I still can’t believe to this day,” Dave recalls. “Most Z enthusiasts drop their jaws when I tell them.” Dave ran to the nearest bank and grabbed the cash to pay for his new Z-car.

When he showed up to see the car in Torrance, California, the owner had charged the battery and had the Z running. “The car was, frankly, in great shape, and I knew right away all it needed was a good, deep polish to look great,” says Dave. To this day, the Z has not been repainted. “It was a little bit out of tune, but I was no stranger to Z-cars under the hood.”

Once he had the car back at his West Hollywood home, Dave immediately began revitalizing the old coupe. Rather than keep it original, he decided to build a high-performance 240Z that would remain correct in spirit. “Doing most of this build very period-correct and keeping the vintage look and feel was very important to me,” he says. The first step was polishing and waxing the Z’s Persimmon-colored flanks. Sure enough, the paint came back to life and was soon glowing like almost-new again.

The interior had seen better days, however, so Dave tackled that next. “That first wash of the car, that first lifting of the carpets and vacuuming of the floorboards had my brain working overtime,” he recalls. “I had a pretty clear vision, and I knew I wanted it to have the look and feel of a car that could have been parked in a Yokohama, Japan, parking lot back in the ’70s.” New carpeting was installed, along with a new shift knob and boot. The rest of the interior panels simply had to be scrubbed clean. 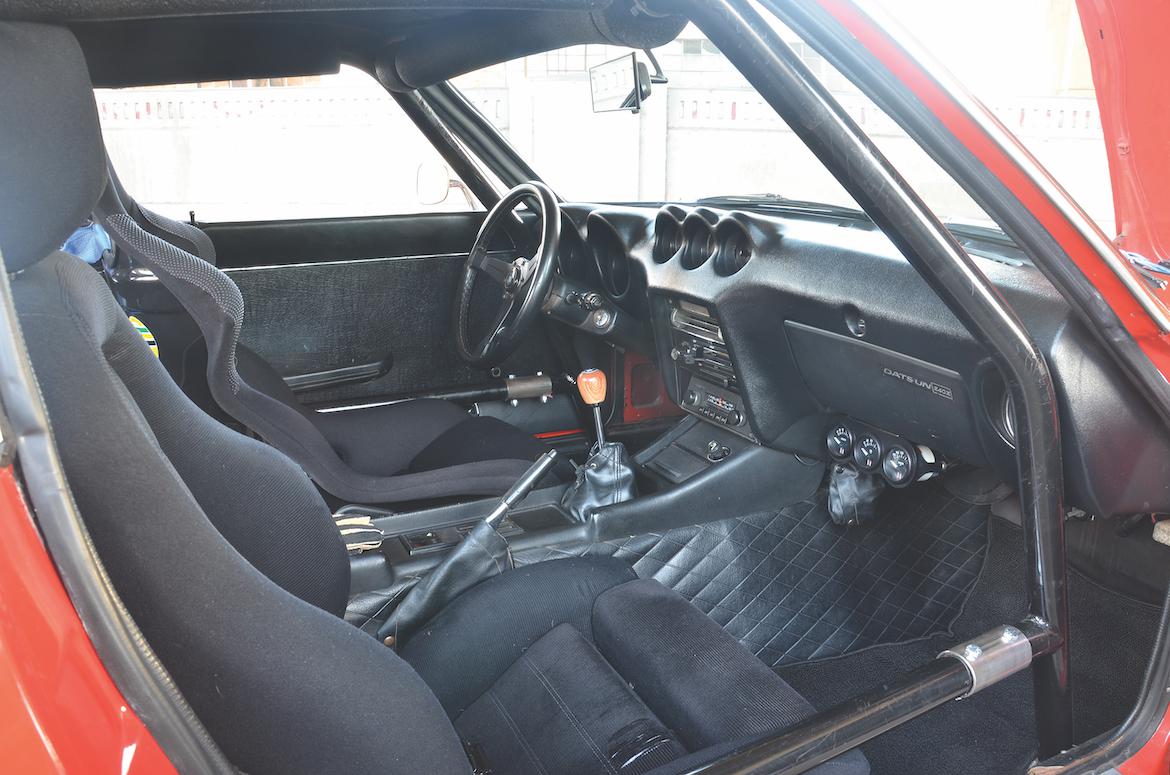 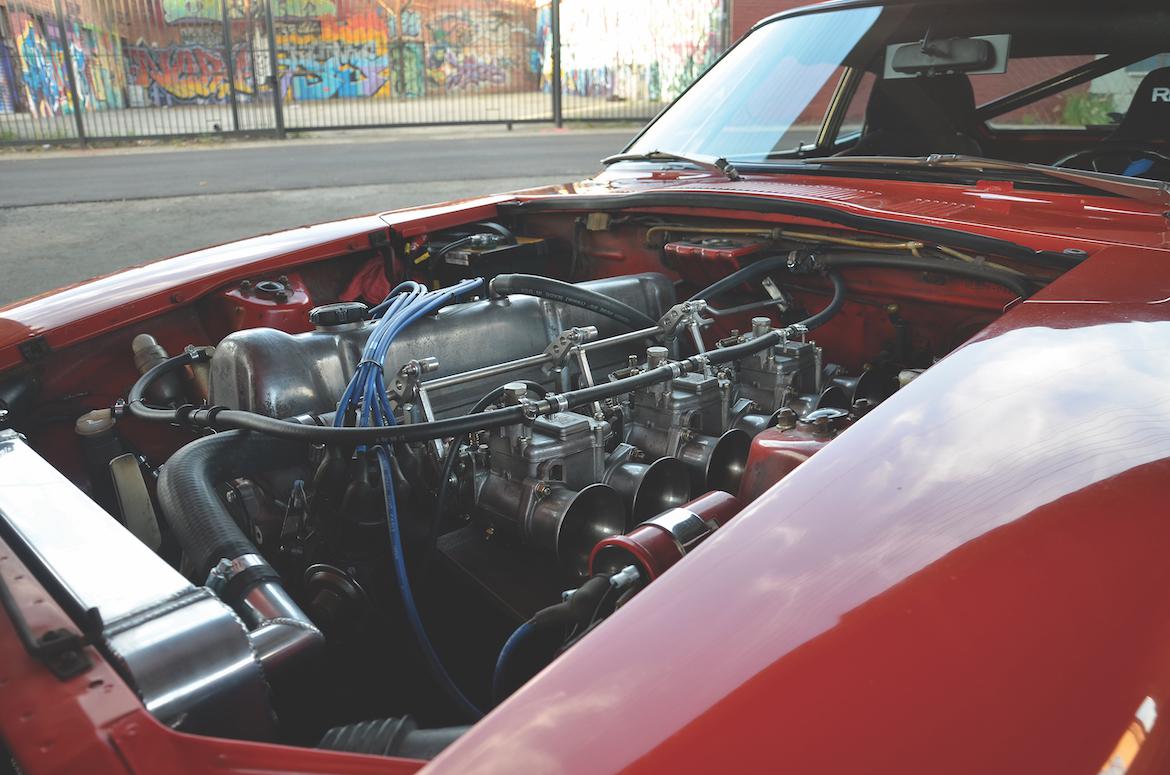 When Dave first got this 240Z, it was a little out of tune, but otherwise in good shape. The original engine has been replaced with a 3-liter L28 stroker sucking fuel through triple side-draft Mikunis.

Dave’s long-term goals for the car involved a significant upgrade in performance, so he also installed a Recaro Profi SPG race bucket that uses a Willans five-point harness to hold him in place; the passenger’s seat was replaced with a Recaro LS bucket. Dave also installed a Nardi Classic steering wheel in place of the 240Z’s large, thin-rimmed wheel. Monitoring the engine’s health is a Stack Clubman tach as well as Stack water temperature, oil pressure and voltage gauges. An Innovate DB2 wideband oxygen sensor has also been added.

Rounding out the interior upgrades is a purposeful-looking Autopower six-point, SCCA-approved roll cage made of DOM tubing and complete with door bars. “It’s great to sit in the driver’s seat and have things feel just right inside,” says Dave. “I think the 240Z has a great cabin—very much suited to the driving experience.”

A big breakthrough in the build came when Dave sourced the rolling stock he had long envisioned for this project. “I always wanted a perfect set of RS Watanabe wheels,” he says, “and when I found them, it just immediately transformed the car to me to the right feeling. It was a real shot in the arm to get the rest of the project going.” The Japanese-made alloys measure 15×8 inches at all four corners and feature zero offset; super-grippy 225/50R15 Yokohama ADVAN A048 rubber completes the look.

On the Edge of His Seat

While the 240Z remains mostly period correct, the monster 3.0-liter engine under the hood is a far cry from anything that was available for a Z-car circa 1970. The Rebello Racing-built powerplant is actually the second one to pass through the car. Dave rebuilt the original L24 himself, but it developed a nasty rod knock two days after he got it back on the road. “That was the impetus for going to Rebello: to make sure I had the best I could get—and, of course, more power,” he adds.

Starting with an L28 block from a 280Z, Rebello slipped one of their trademark 3.0-liter stroker cranks into the freshly machined block. The crank actually bumps the displacement of the inline-six a bit higher—to 3048cc. Sturdy H-beam connecting rods were then bolted to the crank. The small ends of the rods actuate JE pistons with an 11:1 compression ratio, and everything is held together with ARP hardware. A Kameari race-spec oil pump ensures that the engine’s internals stay reliably lubricated. On top of the block is a fully race-prepped head that has been ported and polished. It uses a 63DI Rebello camshaft and black nitride intake valves. 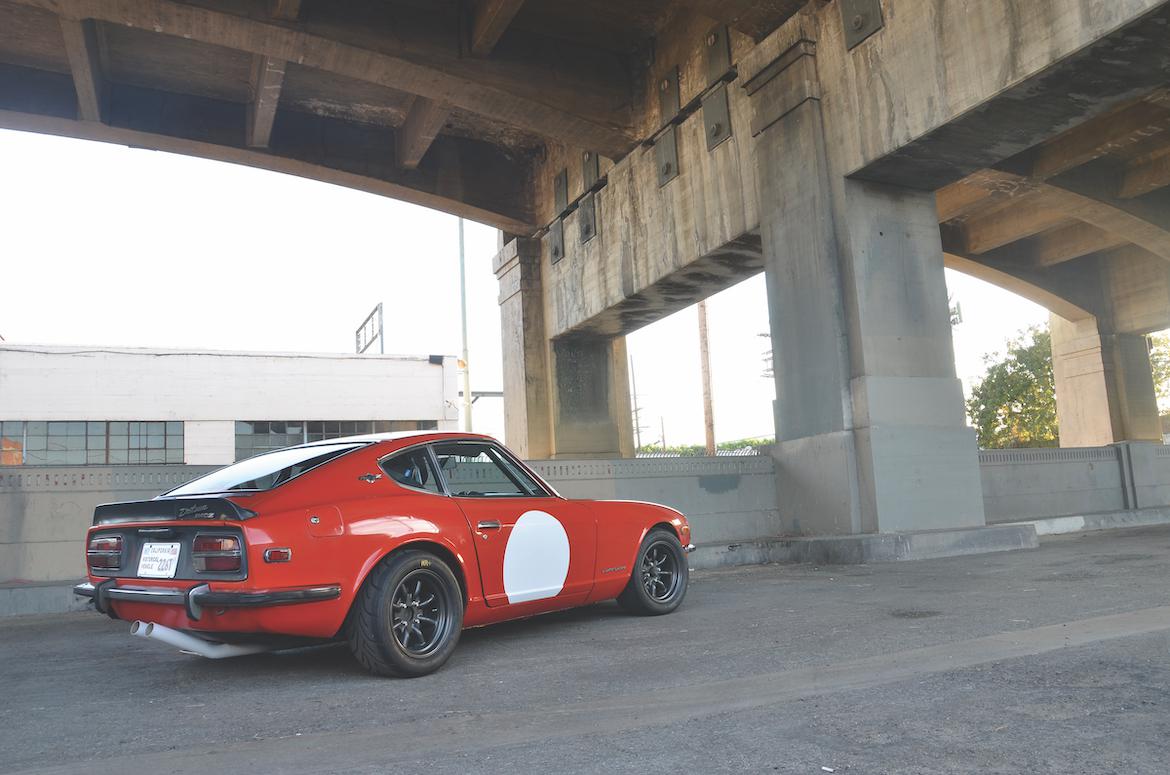 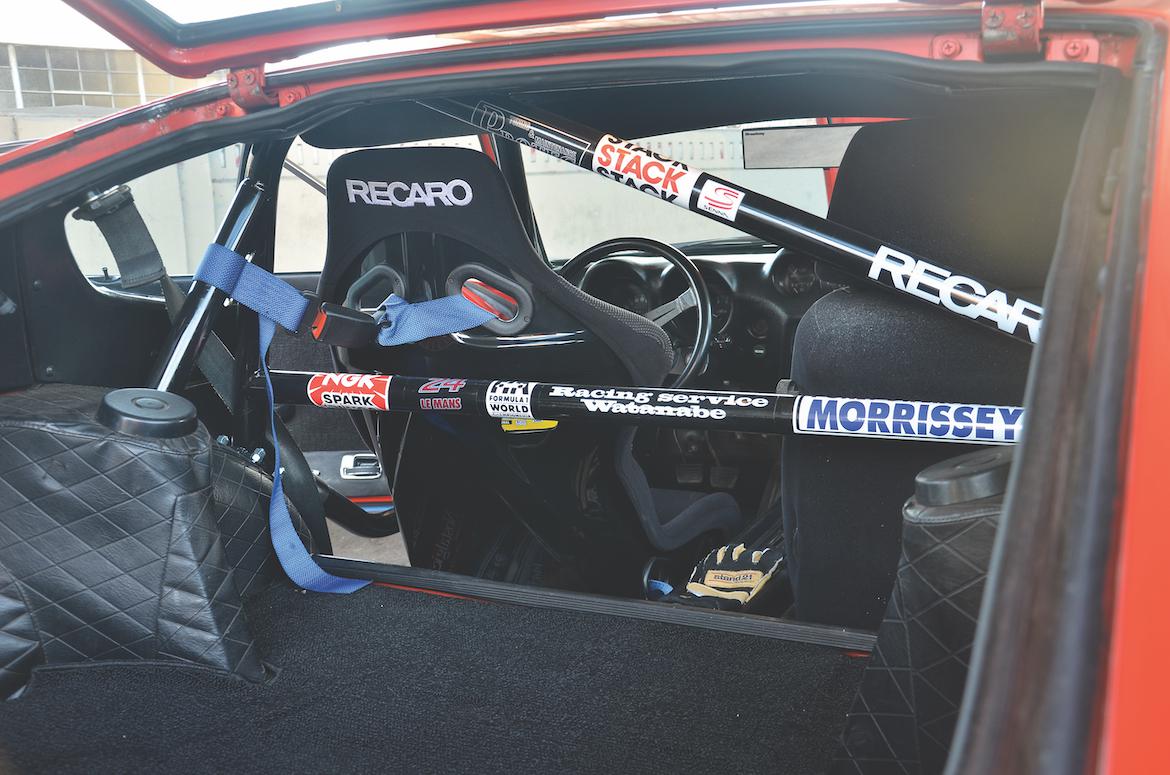 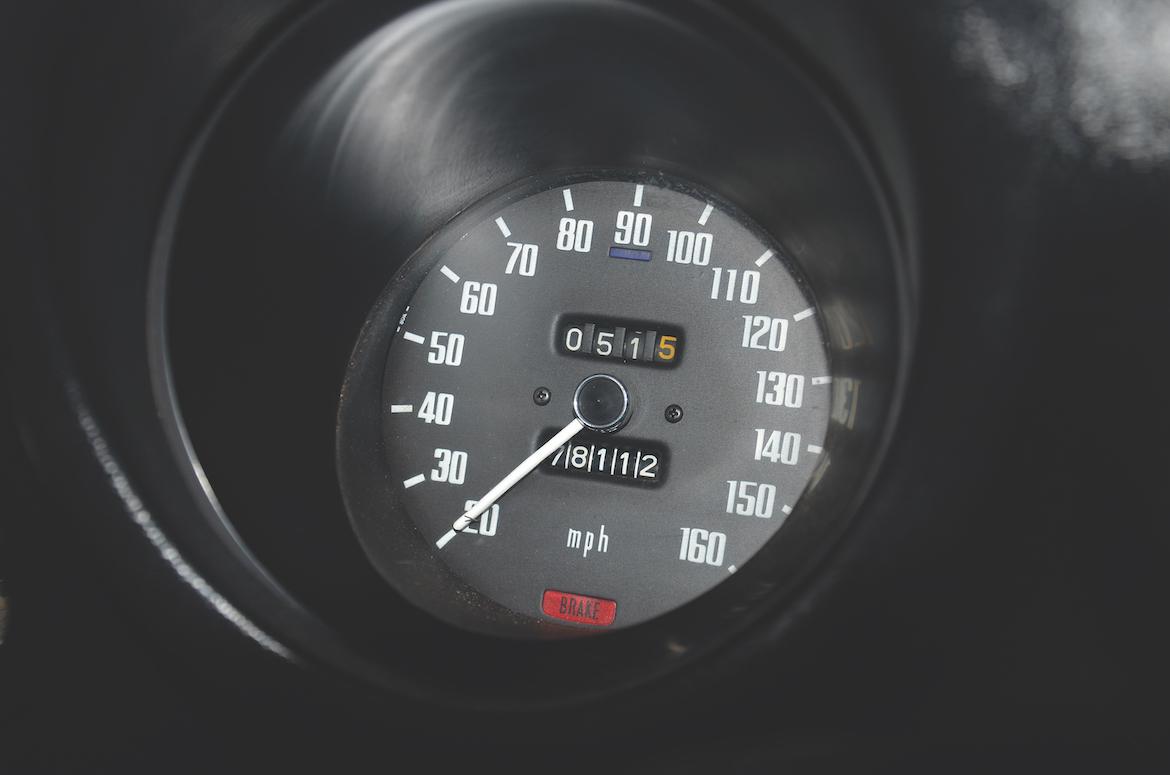 It’s hard to top the look of these angled, center-exit exhaust tips, a nod to the road-racing Z-cars from the ’70s.

Fuel delivery is handled by an epic trio of freshly rebuilt Mikuni PHH44 side-draft carburetors that are fed by an internally regulated fuel pump. The carbs use 39mm venturis and are bolted to a port-matched and polished TWM intake manifold featuring Kameari insulators. A 280ZX distributor and MSD 6AL ignition box take care of spark delivery.

Spent engine gases travel through an MSA six-into-one header and then into a 3-inch exhaust that terminates in a Magnaflow muffler. The exhaust tips are some utterly cool-looking, upturned center-exit numbers that Dave says were inspired by ’70s road-racing Zs. A Koyo Racing Series aluminum radiator ensures that the motor stays cool.

After the engine was built, it dyno-tested to the tune of 300 horsepower and 275 ft.-lbs. of torque, so it was job one to get way more power to the Z’s rear wheels. “When I drive the car now, I’m paying a lot more attention to what’s happening with it,” Dave says of the reborn Z. “I watch gauges and listen for sounds. The change in the sound of the lumpy engine and the glorious sound of the triple Mikuni 44s at wide-open throttle—well, anyone who knows will tell you there’s no replacement for the sound of side-draft carbs. It just gives you goose bumps each and every time.”

For the time being, the Datsun’s original four-speed—matched now with an R180 3.364 rear end—is still being used, though upgrading to a five-speed is on the to-do list. A Jim Wolf Technologies Turbo-spec clutch and pressure plate were installed to cope with the added oomph.

Because the chassis is currently harnessed with much more power than the Datsun engineers ever intended, Dave has worked some magic to keep the aging Z-car on terra firma. Stiffer Tokico struts and lowering springs have replaced the original suspension. Aluminum lower control arms and tension rods have been installed at the front and rear.

The Z’s steering is sharpened by quick steering knuckles and heavy-duty ball joints, along with roll center adjusters. Further adding to the car’s quick responses are polyurethane bushings wherever applicable as well as a solid steering coupler and steering rack bushings. To reduce body roll, Dave installed roll bars from MSA: a 1-inch bar up front and 7/8-inch bar in the rear. “Night and day doesn’t even give contrast with this build,” he says. “I went from a soft chassis that rolled about like a small fishing boat, with 150 horsepower when new, to a stiff, fully caged chassis, quick steering response and 300 horsepower.” 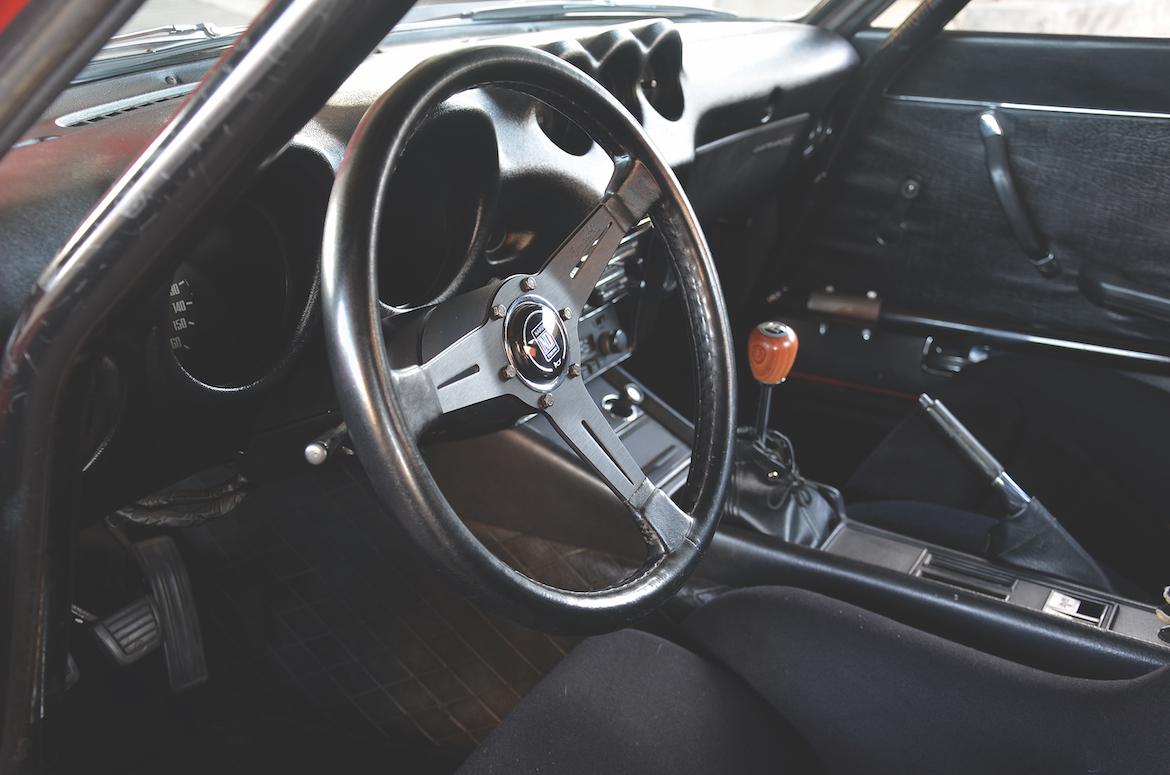 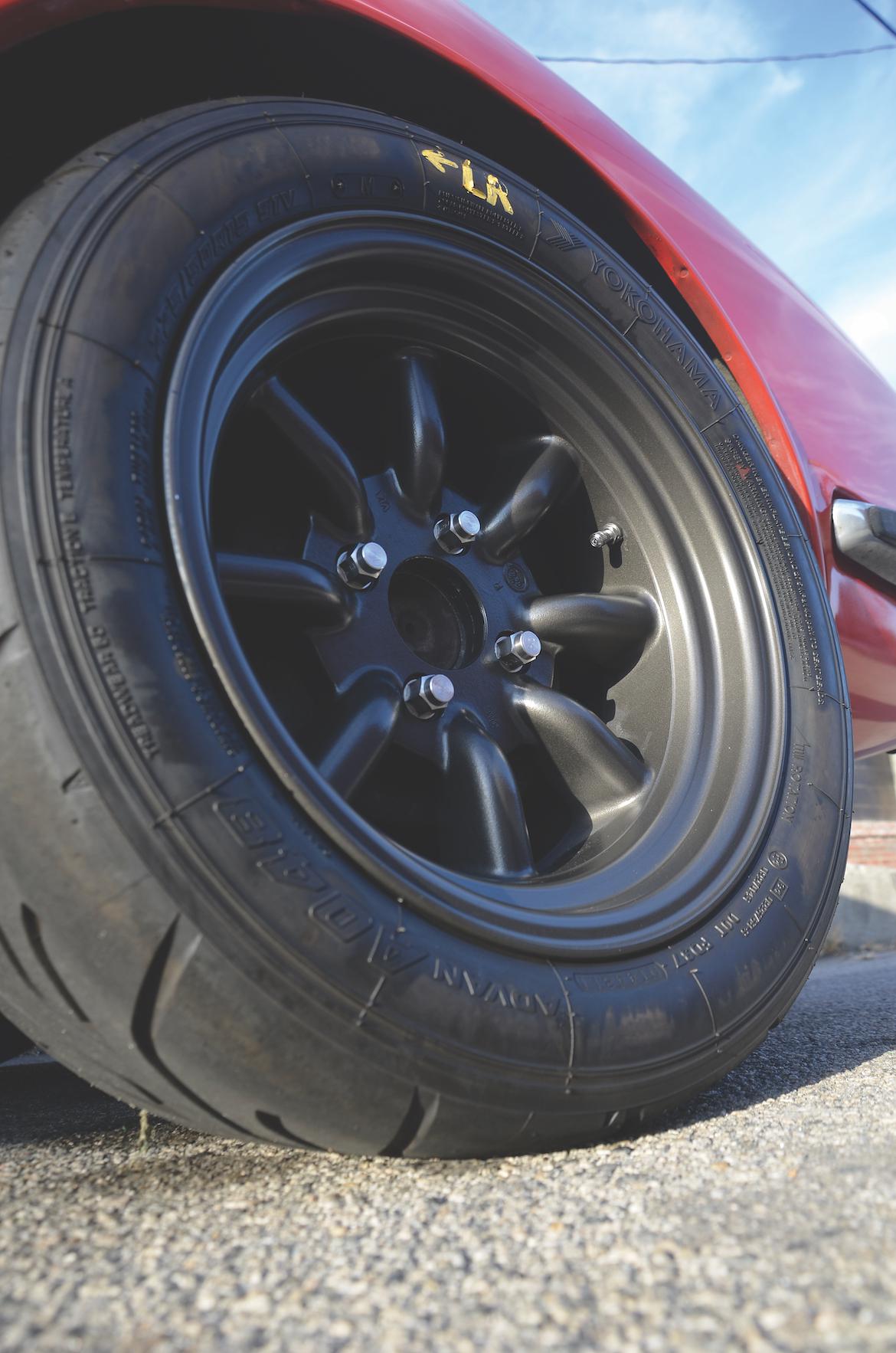 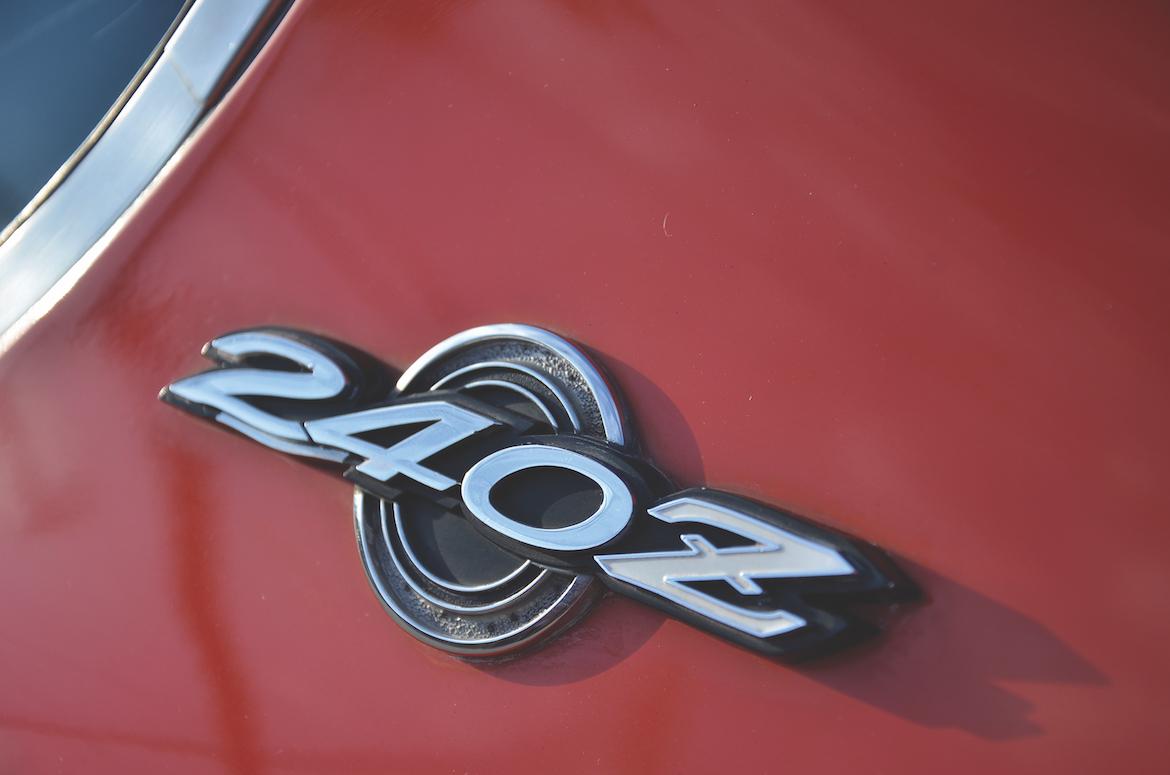 On the stopping end of things, the front calipers have been rebuilt and now contain Project Mu HC-Titan Kai racing brake pads. The calipers clamp slotted Power Slot rotors, while braided steel brake lines firm up the pedal feel. At the back end, carbon metallic brake shoes were installed in the original drums, along with rebuilt wheel cylinders.

With all the hard work that’s gone into the old Datsun, it would be understandable if Dave were averse to wheeling it out of the garage and onto the mean streets of Los Angeles. Luckily, that scenario couldn’t be further from the truth. This is one car that gets street time, and Dave has even driven it to the annual Monterey car weekend—a solid 4- to 5-hour trip.

“Getting in an old car on a cool morning and going out to grab a cup of coffee on a quick canyon drive while the dew rolls off the window—well, I mean, it’s every true car enthusiast’s drug, and I am addicted,” says Dave. Not to mention a bit lucky.

I’ve watched the YouTube on that car 20x. The sound it makes is incredible.

Dave doesn’t know it but he’s my hero.  He’s the wind beneath my wings.

Still love seeing this car pop up. My kind of build. Just because these cars are worth more than they used to be, build it the way you want to.

Dave’s Petrolicious video is the main reason I bought a 260Z.

Thanks for reminding me of this article, I’m trying to size some wheels, and those are perfect.