Areader recently sent me a stack of DVDs containing a bunch of sports car racing movies from the mid- to late ’50s. As I watched one, I caught a glimpse of a red Morgan at the 1953 Pebble Beach Road Race.

Was this the 1952 Morgan I’d just bought? I knew it ran Laguna Seca a few years later, but I wasn’t sure about the Pebble Beach race.

[The best part about buying a new project? Having to travel cross-country to pick it up.]

What were the odds? Well, back then, only a few hundred copies of my model existed worldwide. What percentage of those were the same color as mine and in that same part of the world? But a lot of guys, I reminded myself, tried racing back in the ’50s, when the barrier to entry was rather low. Perhaps it was my car. Perhaps not.

The bigger question: Does it even matter? Maybe. A motorsports pedigree adds something special to a car, and the footage could be documentation of that history.

My 1957 Triumph TR3 benefits from its racing past. The first owners turned it into a race car when it was just 2 years old. The car still wears its original paint, and its history is well documented via period photographs and race results. It ran at places like Daytona and often won. While we still race the car, we’ve always worked to preserve its history. This all adds value.

But motorsports history alone won’t always redeem a car. Case in point: the Bugeye Sprite we’re currently building. We bought it as an old race car and are turning it into a little street machine.

I suspect it had a racing career dating back several decades. Best I can tell, though, it was all erased in the ’80s by a bad paint job and a string of poorly executed updates. Its logbook doesn’t reveal anything exciting: no big wins, no famous drivers.

It was basically an old, worn-out race car, and I don’t feel bad about turning its rust-free carcass back into a street car.

Hindsight being 20/20, taking on this project was probably a bad idea. The more we dug into it, the more we discovered just how severely beaten and battered it was. After two floor pans, a rear quarter and new frame rails, though, the tub is looking as good as new (just more expensive).

Our 1962 Elva Mk VI sports racer is more proof of the value of a pedigree. We bought it disassembled and incomplete, and I was told it had no racing history of note.

Since only 30 of these were made and I had the serial number, I decided to reach out to the registry for these cars. The response: We had found one of two entries the factory sent to Sebring. After that, our car had run most of the other major international endurance races in the Western Hemisphere, including the one-year-only Grand Prix de Puerto Rico.

This news made our $5000 investment worth roughly tenfold. Once sympathetically restored so it again looks ready for Sebring, it could be worth north of $100,000. (Now, had someone even more famous than Chuck Dietrich and Carl Haas driven the car, or if it had come from a more famous marque, the value could’ve been higher still.)

The world is full of old race cars, and values are all over the place. Today’s high-end collector is after Porsches and Cobras driven by names known far and wide in the motorsports world. When will we see the same attention paid to the Hondas and BMWs campaigned by the likes of Boris Said and Randy Pobst?

[Embracing the Youngtimers into the classic car world | Column]

Whether now or in the future, I think several factors can determine a race car’s value: How popular is that make and model, who drove it, how did they do, and how original is the car?

Our Sprite, for instance, is a popular model, but its history is so inconsequential that we’re returning the car to the street. Our Triumph remains a period-correct example with good club history, so it’s worth preserving. And the Elva is special enough that it warrants a period-correct restoration.

I’ve been at this long enough to have turned down some gems, too, including a Shelby Mustang that had extensive Daytona history. At the time, the $10,000 price was way out of my reach.

Have you found any old race cars? Or are you kicking yourself for passing on one? As always, I’d love to hear about it.

Counterpoint: having a pedigree based on history is limiting to your ownership. The more important that pedigree, the more limiting it is – to the point where even washing the car can decrease its value. You start moving your functioning vehicle away from a vehicle and more towards an investment, where your efforts are spent preserving and enhancing that pedigree instead of making the car better and driving it. Now that CM knows that Elva is possibly worth $100k instead of being a $5k basket case, they’re constrained in what they can do. If you enjoy cars as an investment, great. But to me, it would almost be disappointing to learn that I had a significant car on my hands if I had purchased it for other reasons, because those reasons probably didn’t include a carefully curated restoration so someone else could purchase it. 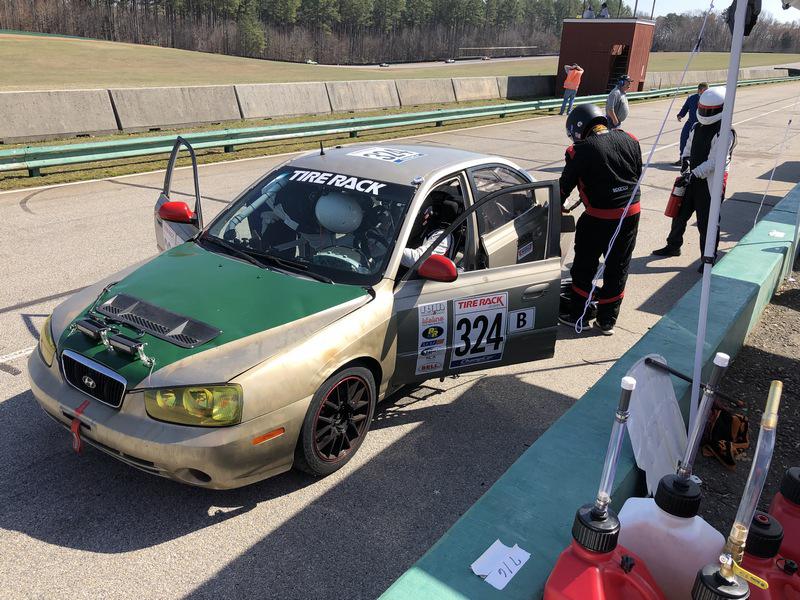 Depends, are we talking a famous and prestigious event from the ’50s-’70s or the winner of the local demo derby?

On the lower-end side of things, a friend of mine once won a local drag series championship with a supercharged Toyota RunX and got an offer from a Caribbean zillionaire car collector to name his price for the car. With that money he was able to import a spec BMW 3-series liftback and enter it into stage rally and rallycross.

Counterpoint: having a pedigree based on history is limiting to your ownership. The more important that pedigree, the more limiting it is – to the point where even washing the car can decrease its value. You start moving your functioning vehicle away from a vehicle and more towards an investment, where your efforts are spent preserving and enhancing that pedigree instead of making the car better and driving it. Now that CM knows that Elva is possibly worth $100k instead of being a $5k basket case, they’re constrained in what they can do. If you enjoy cars as an investment, great. But to me, it would almost be disappointing to learn that I had a significant car on my hands if I had purchased it for other reasons, because those reasons probably didn’t include a carefully curated restoration so someone else could purchase it.

I pretty much feel the same way; if I had some car with great provenance I’d end up selling it because A. the temptation of a huge profit would be to much and B. I know I’d constantly worry that something would happen to it.

I too like the freedom of being able to modify a car how I see fit.

My Formula 500 has some minor provenance; I’m hoping it’s just enough to get it a entry into Monterey some day………..if  some day it turns out to be more than minor it will likely get sold.

Some historical car’s history is that it went through a number of changes (class-wise, engine-wise, etc.) so it’s value may depend on which version of that car you are getting.

I dig knowing the history of a car but wouldn’t want to be burdened by the idea that it was a collector’s item.

If you’re not careful the things you own end up owning you.

In reply to Keith Tanner :

It’s only limiting if your reason for owning the car is as an investment, rather than as a car. 🙂

Most of the reason I have the car now is because it was a friend’s car with provenance.  That is what made the car valuable to me, and worth spending a few years doing the parts hunt to do a mechanical restoration to bring it back to competition ready status.

Don’t get me wrong, it is MY car now, and I am tweaking it as I see fit, but part of the charm is its history.

Somehow I do not think that former SCCA rallycross champions will bring the big bucks at Barrett-Jackson, but the point isn’t to make other people ooh and ahh, the point is to make me smile.  If I am not enjoying owning and driving a car, why own or drive it?

how does it help when purchasing an Acura