Mazda introduced its latest generation of Miata to a fanfare of enthusiast accolades. Returning to its roots with a lightweight, nimble car packing “just enough” power gave Mazda a winner.

Its impact on the motorsports world was immediate at all levels, from the single-make professional Global MX-5 Cup series all the way to SCCA cone-dodging. This ND-generation Miata was also regularly found on road courses as a high-value track toy. And nothing could beat the lithe roadster for Sunday drives on twisty roads for relaxing and exhilarating.

We quickly added a new-for-2016 MX-5 to our fleet–one of the Brembo brake-equipped Club editions–and turned it into a triple threat, equally adept at autocross, circuit use and comfortable cruising.

As great as that car was, one feature stood out as half-baked: the 2.0-liter engine. It certainly delivered solid torque, but seemed to choke on itself in the upper reaches of the rpm range. In contrast to the rev-happy, 1.5-liter unit powering ND Miatas in other parts of the world, this one smacked of grocery-getter grunt.

We’d later learn that the 2.0 was a bit of an afterthought, quickly sourced from the Mazda3 and pressed into service as a stopgap for the U.S. market. Even as the new cars were launched, Mazda’s engineers were working diligently on refining the 2.0 into a more appropriate roadster engine. That updated engine–the most powerful and flexible Miata engine ever–made its debut for 2019. So we got the updated car, another Club model fitted with the bigger Brembo brakes. New, that’s about a $30,000-plus purchase; used, figure a bit less.

We first wanted to quantify the value of the new engine on track. How would that bump from 155 to 181 horsepower feel?

We transferred over all of our C Street-legal autocross parts–Koni dampers, Karcepts anti-roll bar, Good-Win Racing RoadsterSport muffler, Pagid Racing brake pads, 17×7-inch Enkei RPF1 wheels, and 225/45R17 Bridgestone RE-71R tires–and performed an alignment. Then we headed off to Harris Hill Raceway to see what we had. We’d driven hundreds of laps there in our previous-gen car, so consistency would not be an issue.

To simulate a back-to-back test, we first drove the new car as if it were the original ND, shifting just prior to the 6800 rpm rev limit. Since the updated, ND2-chassis car essentially offers the same torque curve over the range that we were using, the comparison would be valid. Our baseline session yielded a bevy of laps in the 1:30.3 range, with a single best of 1:30.0.

After a brief respite to cool the tires and drivetrain, we headed back out to fully exercise the engine and explore that extra 700 rpm.

We could now carry third gear much longer down each of the straights and also into the long, sweeping Turn 8, giving us a nice little squirt before upshifting ahead of Turn 9. Plus, we could downshift to second for extra motivation up the hill through the tight Turn 10.

Result? A whole string of 1:29.3 laps. Depending on how you look at it, that’s somewhere between seven-tenths and a full second quicker.

What the numbers don’t show is the flexibility of the new mill. Torque exists everywhere and response is immediate. Smooth and strong, this engine just keeps pulling. As we said in our initial review, this is the engine that should have been in this car from the beginning.

Thinking Outside the Rules Box

In the past, we have compromised our track day speed by keeping the car rules-compliant for the SCCA C Street autocross class. This means controlling the designed-in excess body roll with only a front anti-roll bar; SCCA Street-class rules only allow an anti-roll bar change at one end of the car.

While this setup works to a certain degree, the side effect is a mid-corner push, limiting our ultimate speed. This setup also tends to chew up the outer edges of the front tires, as they’re doing more than their fair share of work.

To solve both issues, we decided to add a stiffer rear anti-roll bar as well. We ordered one from Karcepts–budget $375 for the rear bar and $600 for the front one–opting for a model featuring the softer 0.095-inch-wall thickness center section.

Thanks to the five adjustment holes, this rear bar should offer plenty of range so we can find the sweet spot to balance out our 0.120-inch front bar. Best of all, once set up, it takes only 10 minutes to swap out for the OE bar to make the car SCCA-legal for autocross again. 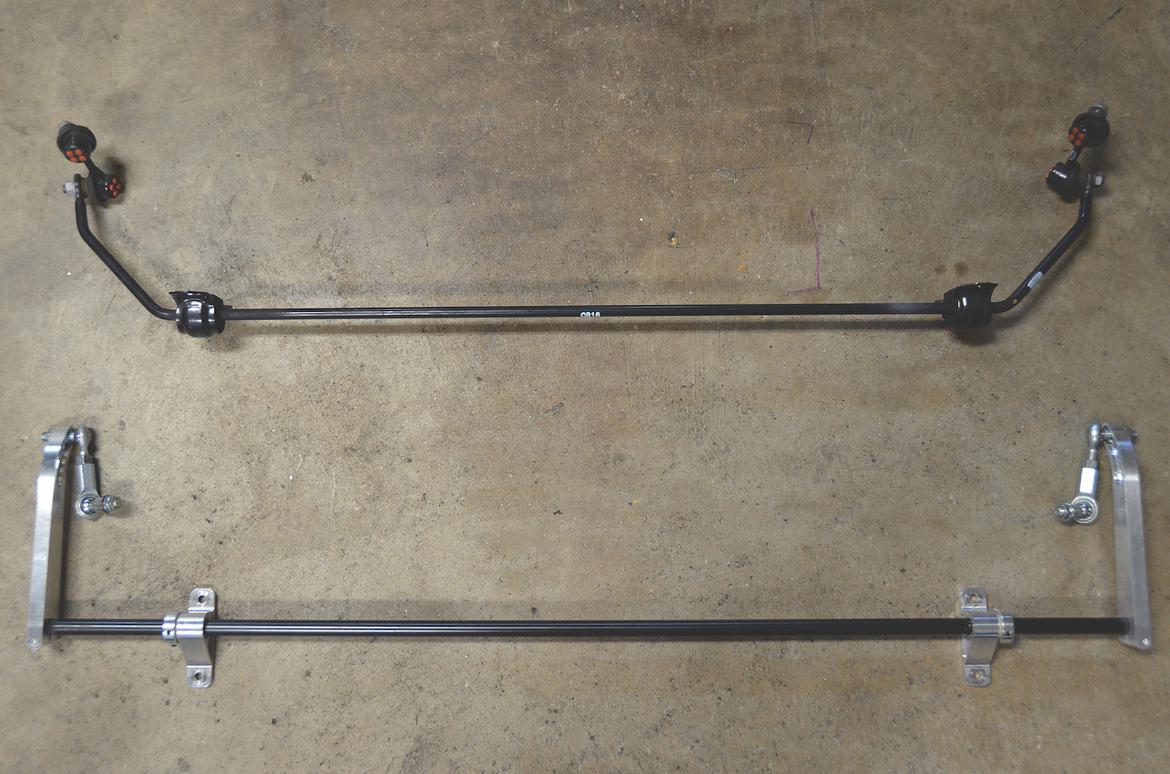 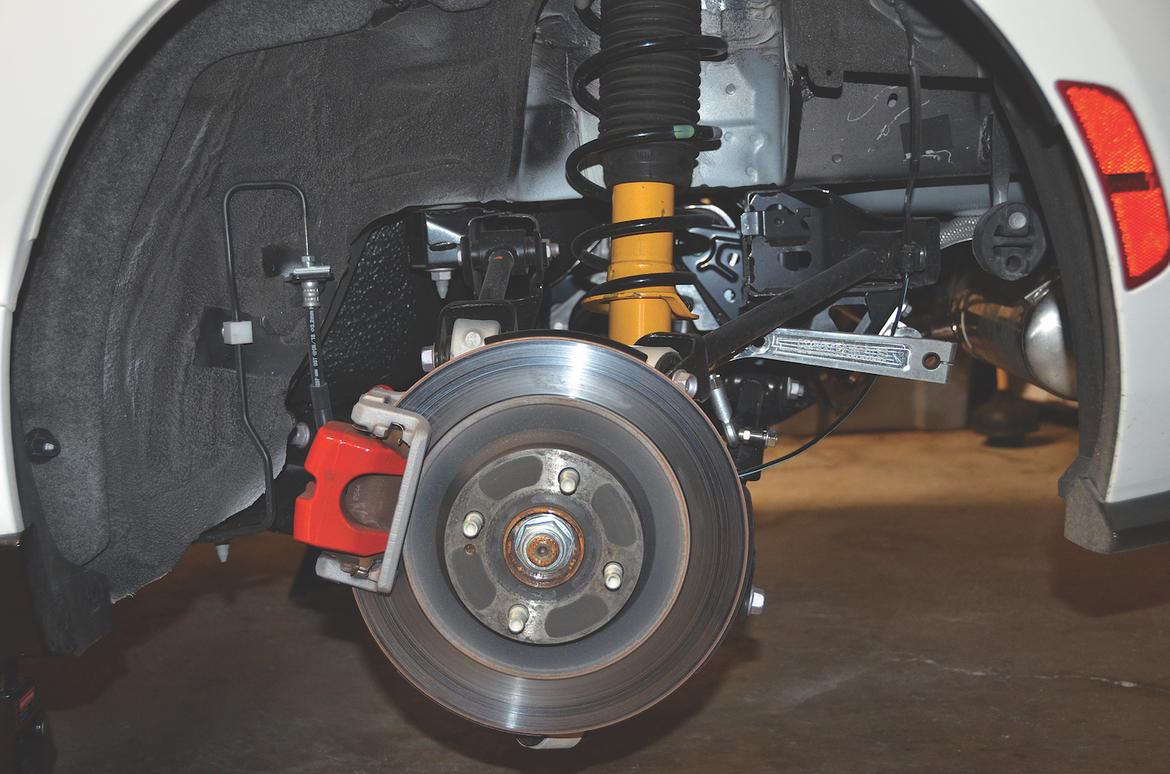 Even at full soft, that Karcepts rear bar is 50% stiffer than the OE piece, perfect for neutralizing handling. We’ve also found that going up one hole at a time on each end matches well for further reduction of body roll with the same balance: third hole front, first hole rear; fourth hole front, second rear; fifth front, third rear.

The car does start to get skatey going this route, however, requiring some attention to both damper and alignment settings to suit the driver and grip level. Further, the street ride quality begins to suffer over one-wheel bumps.

Results were immediate and positive: No longer did we have to “ride the push” through the center of a turn, nor throw the car into a corner to induce initial rotation. In fact, too much trail-braking now caused the rear to walk. Guiding the car on entry was the new fast way.

Another approach that yielded quicker laps: smooth throttle application while unwinding the steering off the corner. We strung together a series of 1:28.6 laps, with a flyer of 1:28.4. Yep, we shaved a full second from just adding a rear bar.

Just as important, the rear tires were now properly sharing the workload, saving us money in the long run on consumables. The edge-cording of the fronts was also a thing of the past. Sometimes you just have to get outside of the rules box and enjoy your car unencumbered.

Next, we revisited an earlier strategy by bolting on a much shorter set of tires: 205/45R16 Bridgestone Potenza RE-71R tires mounted on 16×7-inch SSR Comp wheels. We ran this setup on our first ND-chassis MX-5 and found that the acceleration benefits were substantial in second-gear autocross situations, assuming that we didn’t run out of gear. Would the same hold for the track?

The math said that the car should accelerate at least 4.5% quicker due to the shorter effective gearing. In theory, we’d have enough useable rpm to keep us in the meat of the torque curve at the end of straights in fourth gear, yet still allow third gear in turns. This combination should be a perfect match for Harris Hill Raceway. 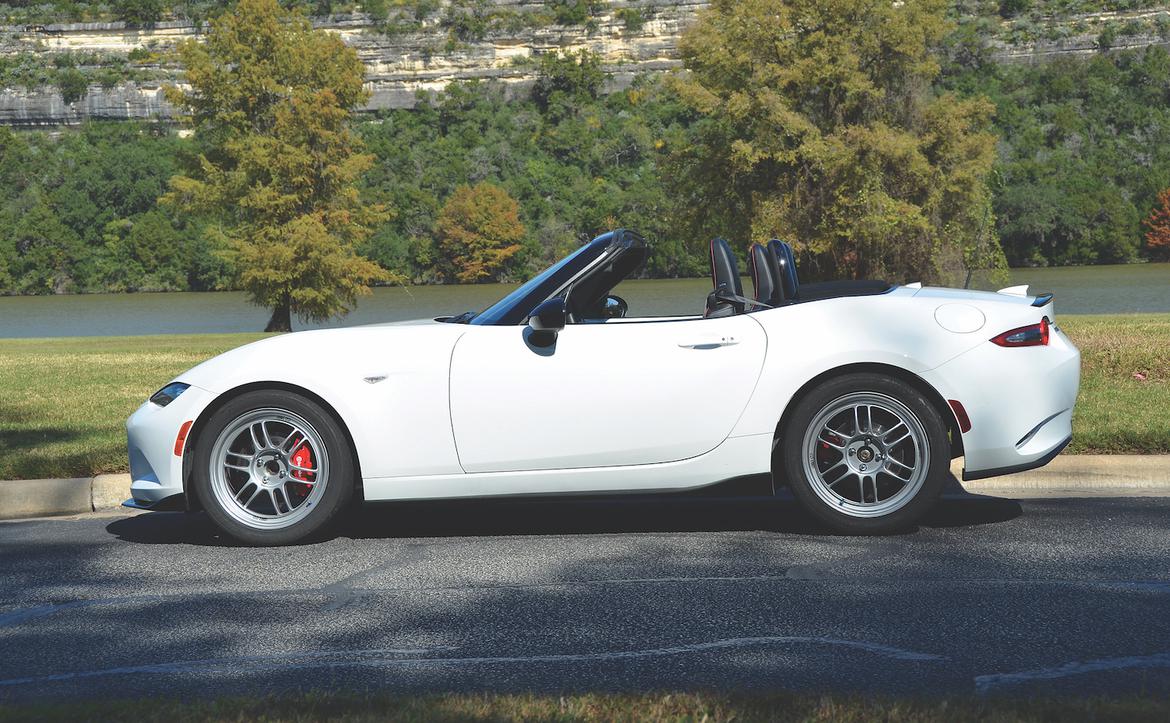 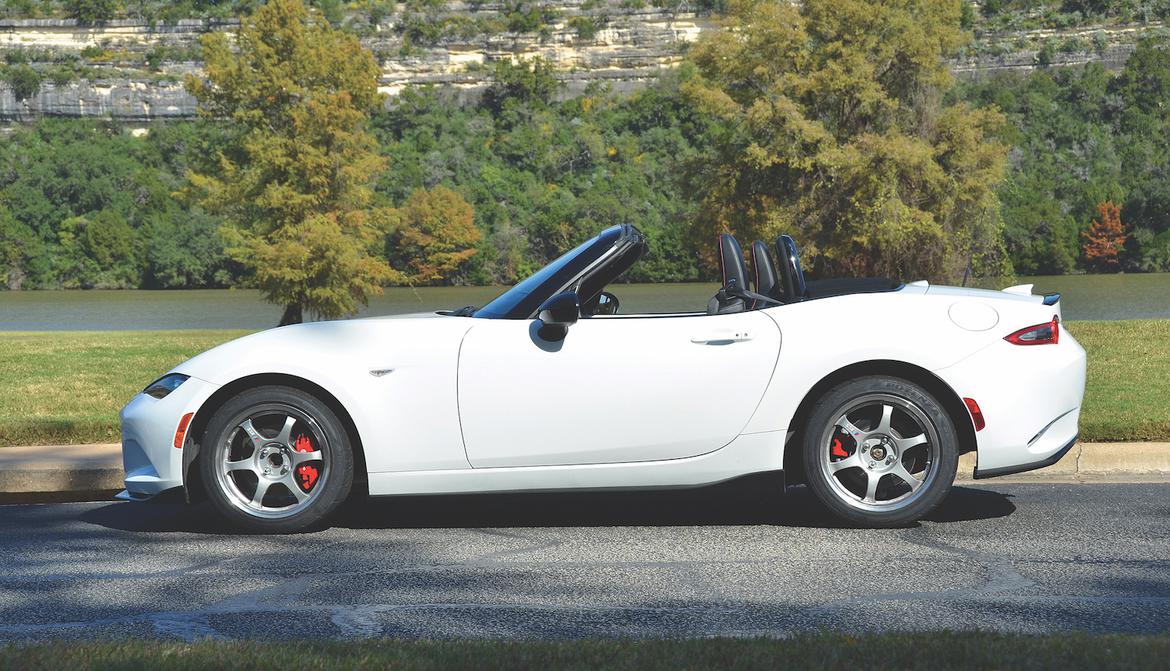 One last tweak: Swapping to shorter tires lowered our gearing and shaved some mass. Our lap times dropped by a full second.

This wheel-and-tire combo also shaved 6 pounds per corner, a total improvement of 24 pounds of rotational mass. We headed out to find out how that affected the clock.

Lap times quickly tumbled thanks to the shorter tires. We clicked off a string of 1:27.6 laps, with a single best at 1:27.4–a full second faster.

The improvement was more extensive than we expected, too, as the car wasn’t just accelerating quicker. The data also showed gains in cornering, and a peek at the car itself revealed why: a 1-inch drop in ride height, shorter sidewalls, and a tire tread width that better matched the rim width all contributed to better handling. Mystery solved. We built a Miata that does it all. 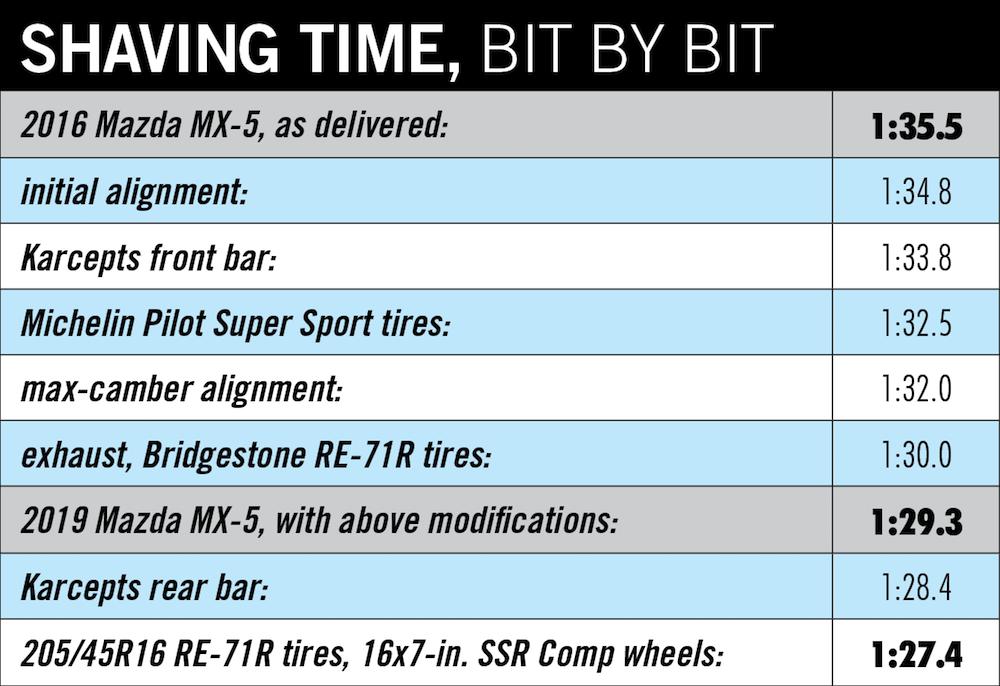