A repeatable, predictable place to track test cars is a phenomenal resource for a track-focused media outlet like ours.

Having the Florida International Rally & Motorsport Park less than a hundred miles from our headquarters means we can easily generate meaningful data from relevant test subjects and chart progress on projects as they develop. It’s also a safe place to test–we’re talking highway speeds without the typical highway hazards.

[The fastest cars to lap the Official GRM Test Track, all in one place | FIRM Lap Time Board]

Lots of media outlets do track testing, and there’s a variety of approaches. Maybe the most famous current one is Car and Driver’s Lightning Lap, which takes place on the Grand Full course of Virginia International Raceway. Motor Trend is also doing some track tests with our old pal Randy Pobst.

First, we recommend consuming all the test results being generated by those outlets–not only as a favor to colleagues who work there, but because more information is better than less information when it comes to assessing a car for track use.

And to some extent, that’s what our track tests come down to. The overarching question we try to answer is, “How well suited is this car for track use?”

You’ll notice it’s a subjective question with few objective metrics, although we do concentrate on objective metrics like lap times. We generate those numbers for quick and easy digestion, but they’re just the beginning of the discussion rather than the end.

So yes, lap times are important, but remember that they’re highly dependent on a nearly infinite number of variables. Let’s walk through our track testing procedure so you can get a better understanding of the numbers we’re generating and how.

First, all our new cars are tested in as-delivered condition. We check oil level, brake fluid and tire pressure, and if the wheel design allows, we’ll peek at the brake pads.

Most of our new cars arrive on Thursdays, and we typically head to the track on Friday. So after drop-off and inspection, the car goes right onto our trailer for an early morning departure to the FIRM.

Why do we trailer if these are all street cars? Well, it’s a 100-mile drive, and plenty can happen on that stretch of Florida back road. The additional fuel needed for the tow easily offsets the lost productivity of showing up to find a nail in a tire of a test vehicle. Towing also ensures that test cars arrive at the track with a full tank of fuel, and we have capacity if something should go wrong.

All our new cars are tested on their as-delivered tires. We’re conscious of the fact that heat can quickly destroy tires not designed for track use, so we keep back-to-back laps to a minimum.

Typically, our first session consists of two laps at 80% to get a feel for the car and the day’s track conditions. Then we try to lay down a solid timed lap and reassess from there. If we felt like we were getting most of the available performance from the car, we do a cooldown lap or two, then another flyer, then another cooldown, then bring it in.

After the first session, we change camera angles, debrief a bit and, most importantly, check tire wear. This determines how hard the car gets pushed in subsequent sessions and if we end up doing back-to-back hot laps at any point. Frequently, fast front-drive cars (Civic Type R, we’re looking at you) can overwhelm their front tires and conspire with factory positive camber settings to shred tread blocks if we aren’t careful.

We’re always conscious of tire wear. This doesn’t mean we slow down any on our hot laps, just that we try to manage tire heat to cause as little destruction as possible.

[How to manage tire temperatures for improved on-track performance]

After that initial session, we typically go out and do three more sessions. Session two consists of alternating cold and hot laps, as does session three. Session four is typically just for photography and video purposes, but if we suspect there’s more time left in the car, we let the camera crew know we’ll be putting down a flyer. Over the course of the test day, we typically end up running somewhere between six and 10 actual hot laps of the 1.4-mile layout. (We do our timed laps without the Shoebox, hence the 1.4-mile distance versus the full 1.6.)

We should also address driving style, too, since this is important to any test methodology. I’m behind the wheel for most of our testing, and I’ll say that I consider myself a fairly competent driver of a variety of cars. I’m also extremely familiar with the FIRM at this point.

But I’ll also say that the test numbers I generate there aren’t entirely indicative of a car’s fastest possible time at that facility. This isn’t only so I can produce repeatable results, but also largely so no one ever has to write an awkward email to an OEM telling it to come pick up its crumpled husk.

That said, the highly repeatable 99% laps I’m doing at the FIRM stack up nicely with locals running similar cars. In some cars, however, we may be leaving a small amount on the table in the name of sanity and mechanical preservation. My 99% is a highly experienced and well-skilled 99%, and the comparisons it produces between each car are accurate.

Now let’s talk about those comparisons, because we all know there are lots of variables affecting lap times: track temperature, track condition, weather, sun angle, tire age, and inherent variances within each car that rolls off an assembly line.

So while we want you to pay attention to lap times in a general sense, understand that the performance window each car is operating within can easily be a few tenths of a second between a February or August test session–or even a 10 a.m. or 2 p.m. run group.

When you see that the Hyundai Veloster N ran 0.3 second faster than the Civic Type R, know that this will not translate into an automatic 0.3-second advantage for every 1.4 track miles that the cars cover. Instead, read that as the Hyundai being able to run with–and even outrun, given the right conditions–what’s considered the top dog in the class.

You can put faith in those lap times as a general trend–a Supra is faster than a BRZ and a C8 is faster than both–but don’t sweat hundredths or even tenths too badly.

Instead, use those lap times as context while you read the story about the car. How easy or difficult was it to generate those lap times? What was the driving experience actually like? And how do those lap times correlate with the data traces we publish in each track test story?

We partner with great companies–like Racelogic, Garmin and Apex Pro–to bring you a deeper level of information than simple lap times. The data traces break down how and where those lap times were produced. This is how we found out that an automatic BRZ can pull as hard as a Civic Type R in third gear, and that the new Z can’t out-corner a GTI.

[Go faster in autocross | The apps, sensors and traces you need]

We also try to replicate how most cars will actually be run on track, and that usually means setting any electronic stability and traction controls to their most advantageous modes. Usually this means “off,” but fully off isn’t an option in some cars, and sometimes particularly track-focused, high-end cars have settings that can produce more favorable lap times.

We’re very glad that we’ve received positive feedback on our track testing in print, online and on YouTube. We strive to produce the most relevant data we can given our limited resources as an independent publication, but we pride ourselves on being able to produce data that helps our community. 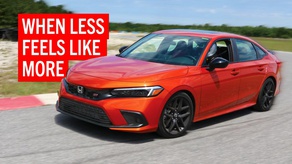