The Jeddah Corniche Circuit is undergoing further track changes ahead of the 2023 Saudi Arabian Grand Prix to try and improve safety at the venue.

Jeddah’s high-speed street circuit has proven to be popular with drivers, but a number of concerns were raised about the lack of run-off areas in some sections and also the visibility around high-speed corners due to the proximity of the walls. The latter sometimes causes issues in qualifying when cars are on slow laps, or if another car is arriving on the scene of a recent accident.

OPINION: Ricciardo made the right move

After some minor changes were made last year, discussions with F1, the FIA and the drivers has resulted in further work being done to address sightlines, with the walls at Turn 14 and Turn 20 being moved back to improve visibility. 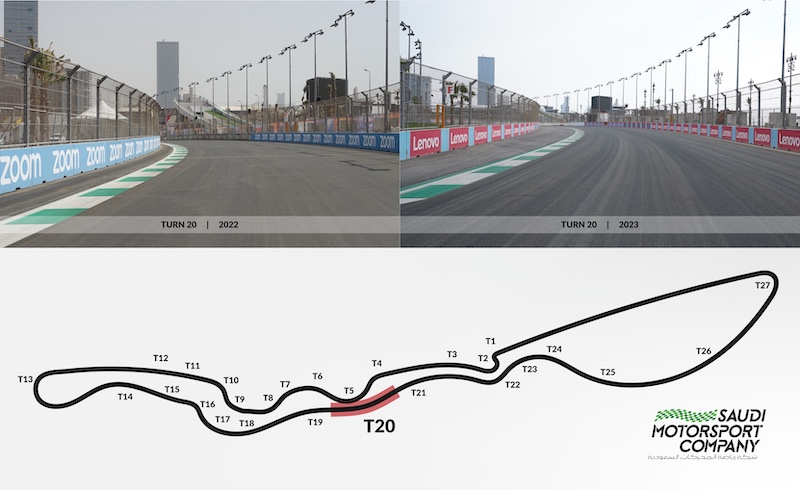 The Turn 22-23 section has also had work done to move the wall and update the curbing, with a beveled curb introduced that is designed to slow drivers down by approximately 50kmh/31mph. ‘Rumble lines’ have also been added at some corners to slow cars by shaking them and causing them to lose traction.

“The evolution of the Jeddah Corniche Circuit continues apace and we are excited to add these further tweaks to our magnificent track as a result of positive consultation with the FIA, F1 and the drivers,” Saudi Motorsport Company CEO Martin Whitaker said.

“The previous two races here in Jeddah have already confirmed the JCC as the world’s fastest and most exciting street circuit, and these new developments will only add to the spectacle that fans can expect to see next March when F1 returns to our city.

“It is vital for any circuit to listen and learn from those racing on it and use their feedback to grow and improve at all times. We are confident these changes will lead to even faster, more exciting and – crucially – safe racing and we can’t wait to see the world’s greatest drivers battle it out here under the lights again in 2023.”

Don’t forget this important part of the braking system | Articles

Don't forget this important part of the braking system | Articles

Russell within a tenth of Hamilton – Mercedes