How to Properly Tune an Engine | Go Faster! | Articles

Whether you’re looking for better lap times or more miles from each gallon, every engine is happiest when operating at peak efficiency. While today’s new cars are usually pretty well maxed-out from the factory, things start to change after thousands of miles have been covered: parts age and wear, dirt gums up the works, and equipment falls out of spec.

Then there’s always the case of the previous owner. While usually well-meaning—or just plain cheap—the previous owner is a dreaded creature who tries to make improvements, but usually just messes things up thanks to selecting improper parts, skipping steps or failing to grasp proper tuning techniques. Sometimes, a lot of the tuning process involves just undoing past mistakes.

Returning an engine to its proper glory isn’t a hard task, and the rewards will usually outweigh the expense. Here are 10 easy steps to a great tune-up.

Any number of things can cause a once-perfect engine to need some attention all of a sudden. Anything from years of daily service to mistakes by a previous owner can foul up that tune. Fortunately, it’s not the end of the world. We’ve got 10 easy steps to help correct the problem. Start easy and work your way deeper for a great tune-up.

Many people think a tired engine can’t be tuned. This is true in some cases and false in most others. If the engine burns oil or has low oil pressure, yet still shows good, even compression readings across the board, then it can still be tuned to run well.

On the other hand, if an engine has bad or uneven compression readings—say a variance of more than about 10 percent between cylinders—then you’ve got your work cut out for you. But before you tear apart your engine, try torquing the head to spec and adjusting the valves; after retorquing the head, check the compression again. These simple steps might solve your problem.

2. Most Fuel Problems Are Caused By the Ignition 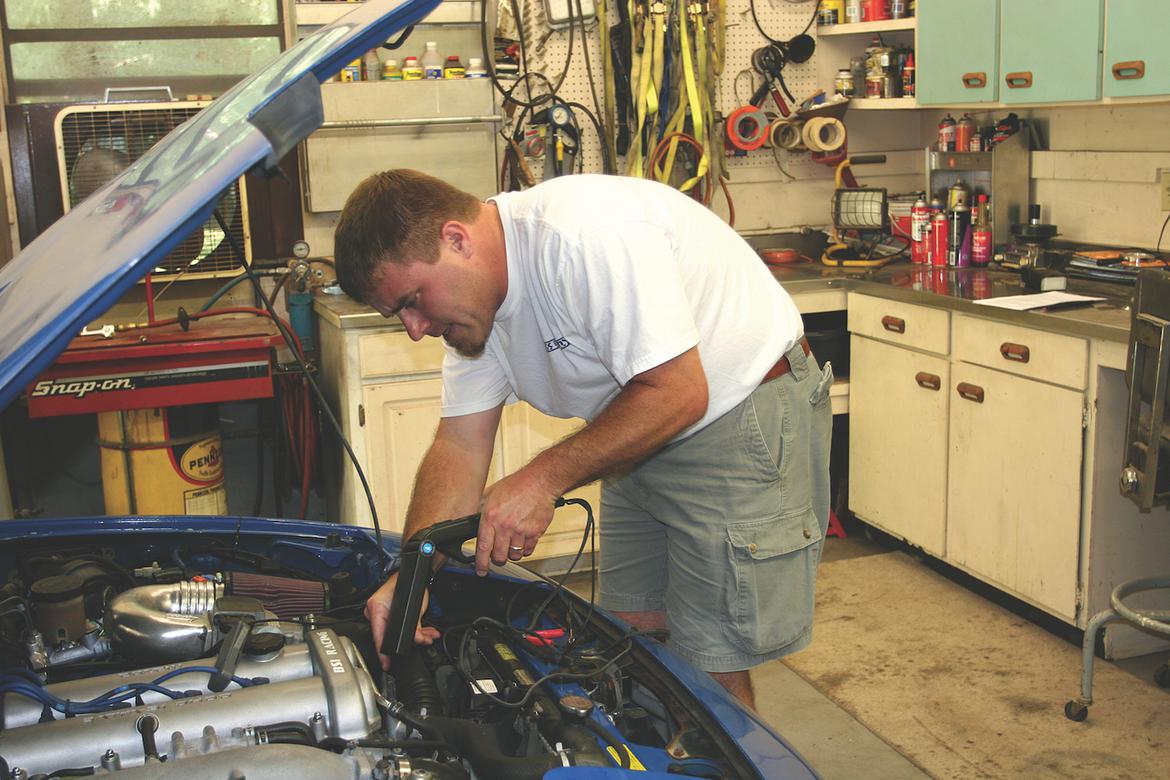 After you’ve made sure you have good compression, you need to make sure the ignition system is in perfect shape. The correct plugs must be installed and they need to be clean and gapped properly. Make sure the wires, cap, coil and other hardware are clean and not showing weather-checking.

A good test for the ignition components simply involves misting them with a water sprayer while the engine is running. If the engine misfires or you see or hear sparks, you have some dirty or faulty components.

Once you’ve inspected these parts, check the dwell (if points are still fitted) and the ignition timing. You cannot set the timing until you have the correct point gap or ignition dwell.

Now it’s time to check the timing. Check it at idle and around 4000 rpm. At idle, it should be set at or near the manufacturer’s setting. At 4000 rpm, it should be between 30 and 40 degrees BTDC, depending on the car. (Check the manual or a trusted source for the specs.)

When checking and setting timing, make sure the vacuum advance (if fitted) is disconnected. Reconnect it before moving on. 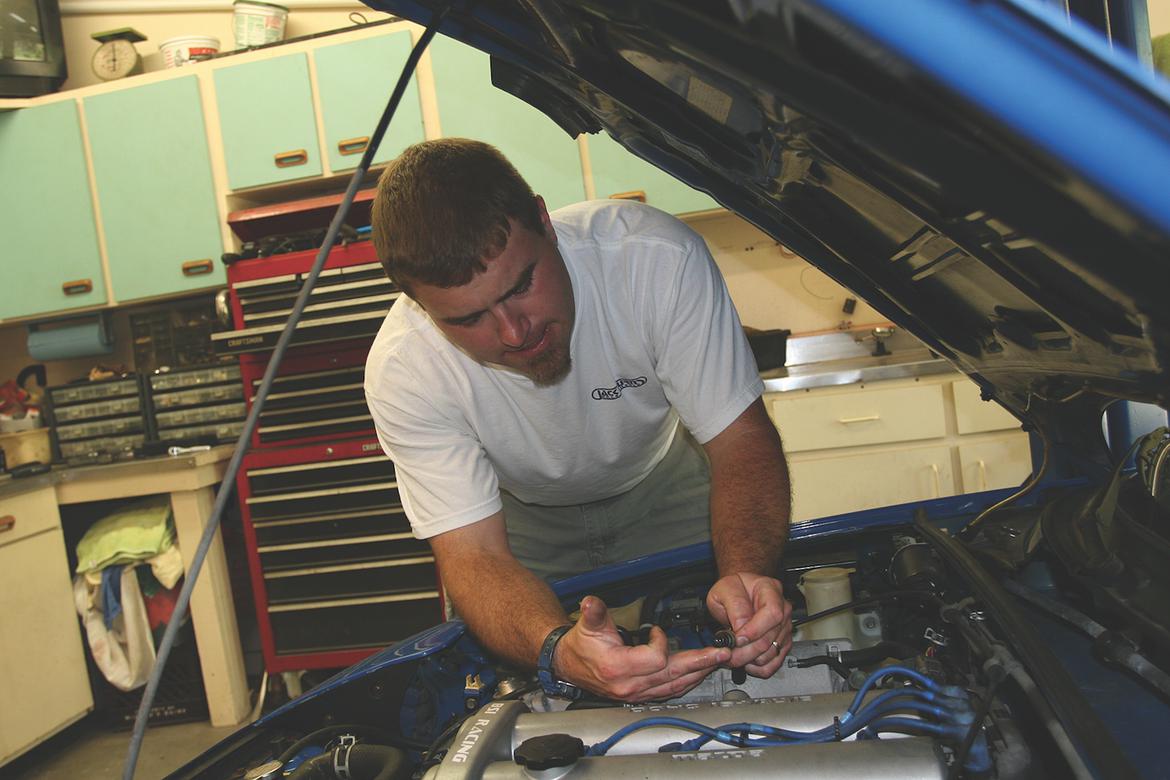 No serious tuner will ever even attempt to tune an engine with vacuum or exhaust leaks. Exhaust leaks can make strange things happen, especially if your car uses an oxygen sensor. Vacuum leaks make tuning an engine nearly impossible.

To check for exhaust leaks, start by simply listening to the engine. Then safely get the car in the air and look for black streaks at the joints. You can also run your hands near the joints and sometimes feel the exhaust leaks, but be extremely careful not to burn yourself.

Now it’s time to look for vacuum leaks. After a visual inspection of all inlet hoses and fittings, the easiest way to find vacuum leaks only requires a can of carb cleaner. Spray the intake manifold gasket areas, throttle shafts and hose joints while the engine is running. If the idle quality changes when the carb cleaner is sprayed, you’ve found a vacuum leak to fix. 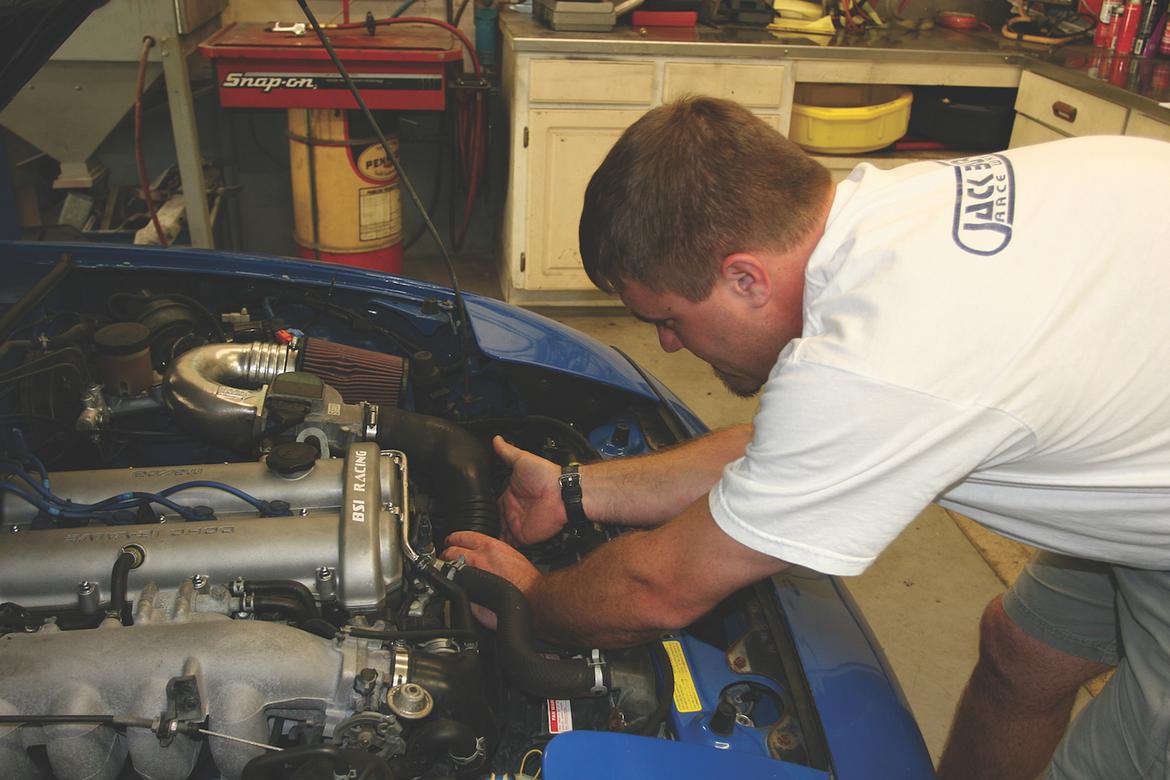 If any of this equipment has been removed, it’s imperative that it was done properly. Improper removal of these parts often leaves vacuum leaks or other problems behind.

On a related note, some enthusiasts are quick to remove their catalytic converters, believing that doing so will free up some horsepower. Our dyno testing has shown that this is not the case, as a properly working converter rarely costs any measurable horsepower. Catalytic converters rarely fail, although we have seen it happen. If the engine feels like it’s being choked, there may be a problem with the cat. Like we said, though, this is a rare occurrence. 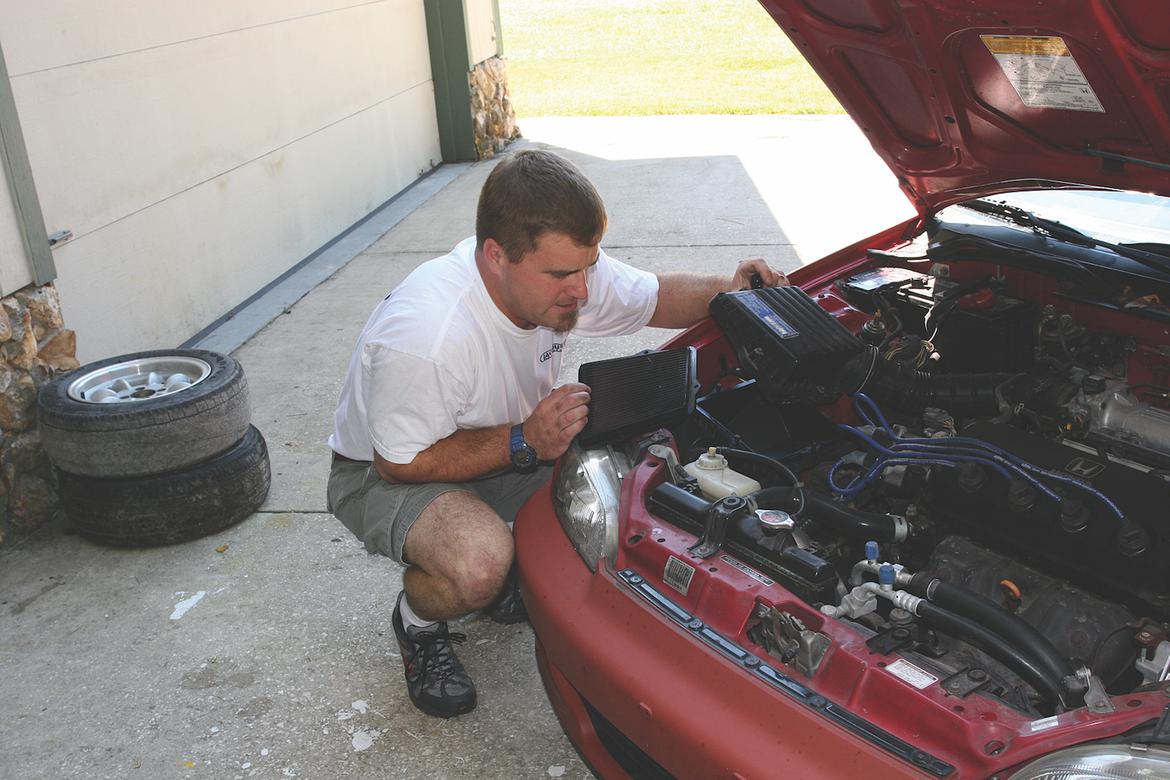 Dirty air and fuel filters can really screw up an engine’s tune, so make sure they are new, or at least very, very clean. If you don’t have a fuel filter, add one. Older gas tanks usually have a lot of dirt and scale in them. 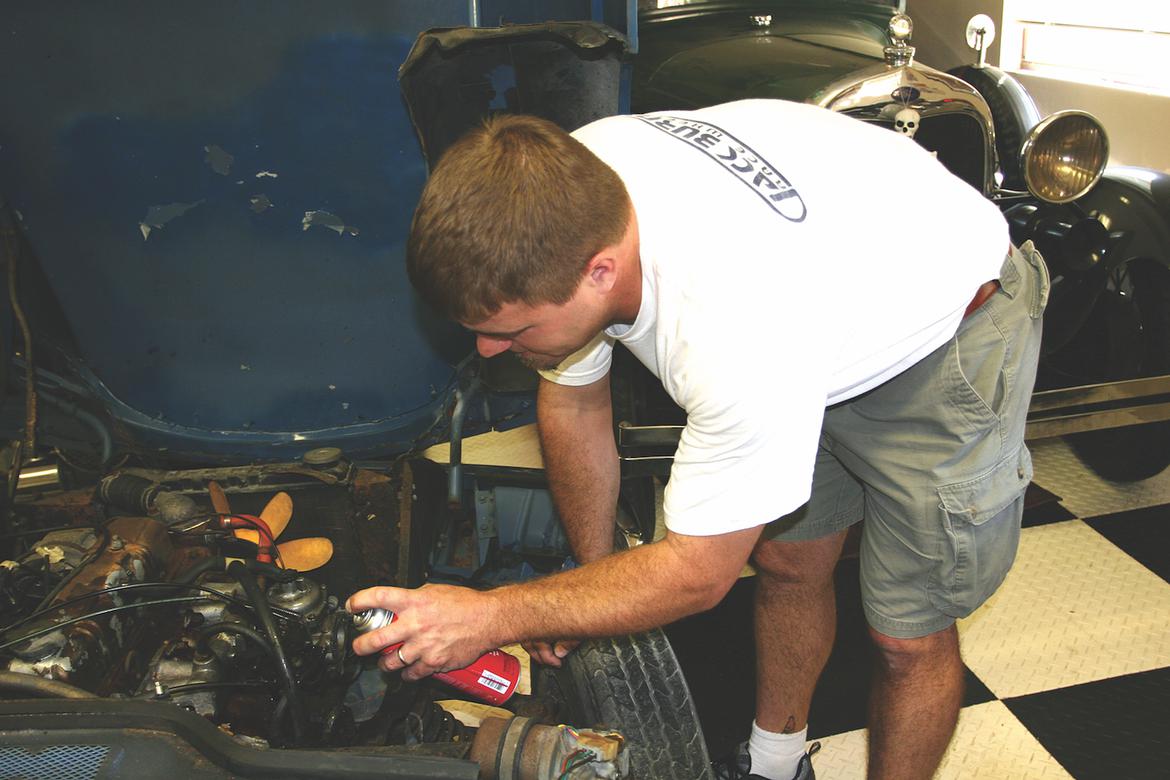 Start your tune-up with the ignition system (No. 2). Once the ignition check is complete, move on to see if there are any vacuum or exhaust leaks (No. 3). If no leaks are found, check that your emissions system is in order (No. 4). Improper removal of any of the emissions items can cause problems. Dirty air and fuel filters (see sidebar on page 135) can also cause an engine to run poorly (No. 5). All filters should be clean. Also, be sure to keep the engine bay (No. 6) as clean as possible. The less dirt in there, the less of a chance for things to get gunked up.

We’ve mentioned that ignition systems and filters don’t like dirt, and neither do carburetors, throttle bodies or their linkages. Keep your engine bay as clean as possible, especially around the intake and ignition components. Linkages especially don’t like gunk on them, so give them a little extra attention when cleaning up. 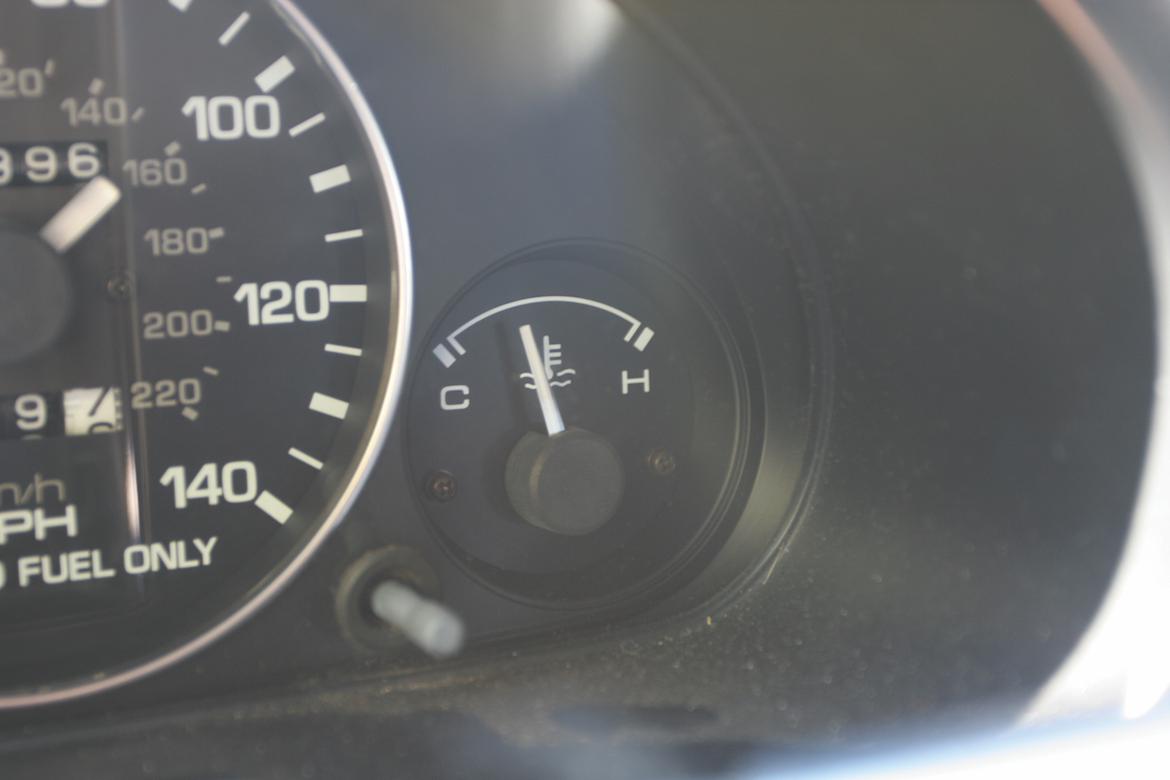 Most engines were designed to operate with water temperatures between 180 to 190 degrees Fahrenheit. If your engine is running hotter or cooler than it should be, you need to fix the situation before you dial in a tune-up.

It’s actually worse for an engine to run too cool rather than too warm. Figure 160 is usually too cool for most engines, and while 200 F may seem a bit alarming, it’s not problematic. 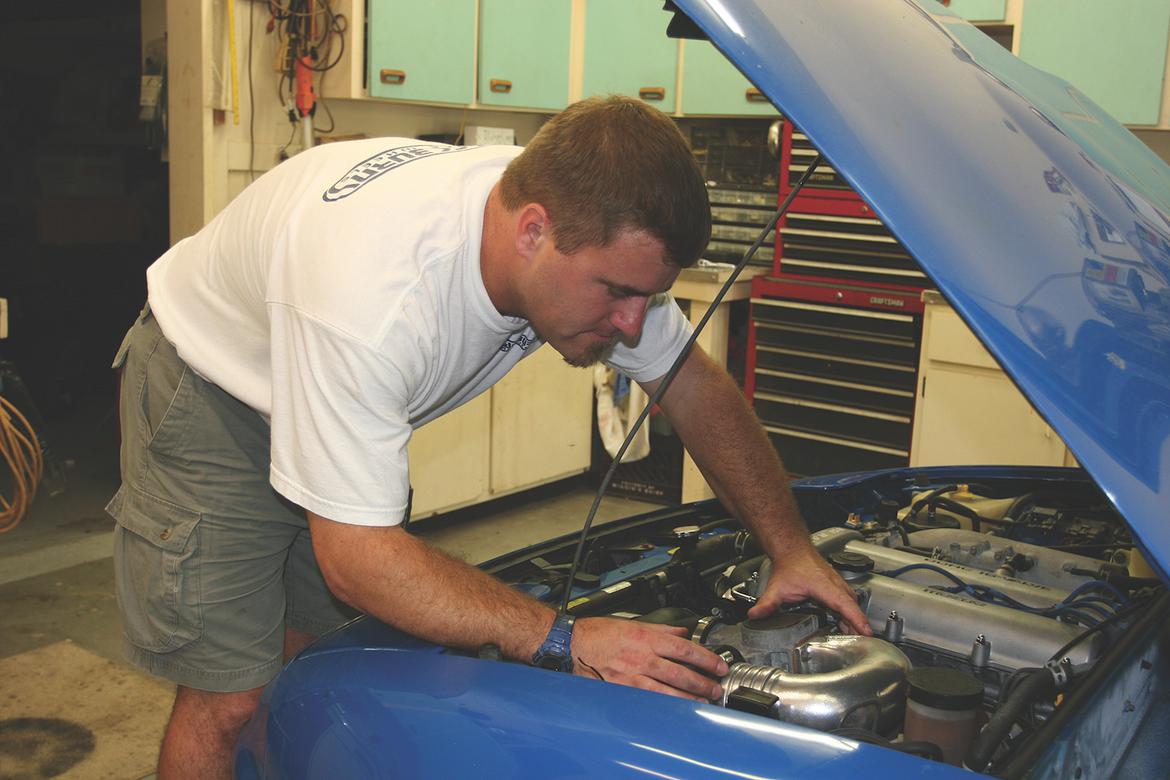 If you haven’t owned your car since new, a previous owner may have done some “upgrades” in the past that involved installing new hardware. Make sure that everything inside the engine bay is compatible.

For example, it’s very common to find distributors with incorrect advance curves installed. Significantly oversized carbs or throttle bodies on otherwise stock engines aren’t going to help, either. You’ll never get a good tune if all of the components aren’t matched. 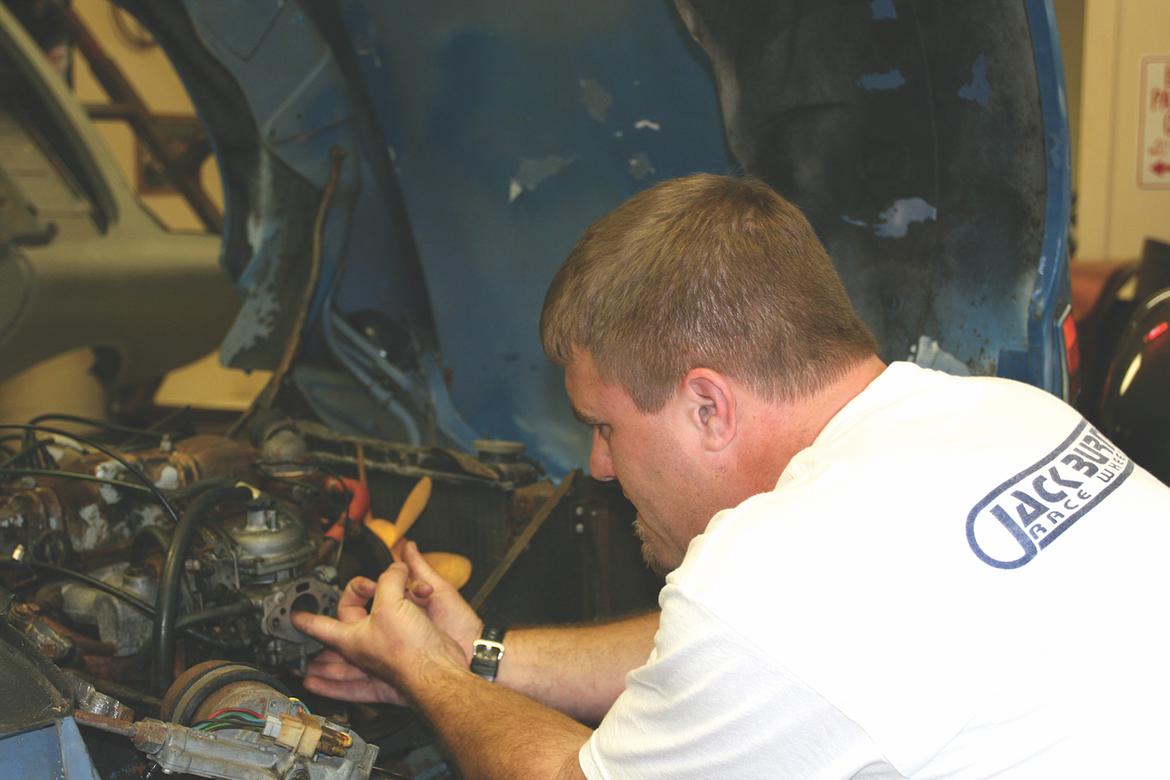 Before you start adjusting the carburetors, make sure that the basic settings are correct. You’ve already checked for vacuum leaks, but check again.

Then check that the float height and basic jetting (needles or jets) are correct. It’s common to find that someone installed the wrong jetting components—usually jetting is much too rich if this has happened.

Next, make sure that any choke components are working and adjusted properly. A stuck or misadjusted choke is not going to make tuning any easier. Lube all linkages and make sure they are working smoothly and without any binding. Then move on to tuning the carbs.

Most people think that tuning a carb is like a grand magic trick. It’s not. In fact, if you’ve done everything already covered, you hardly have to touch the carburetor. The only tuning that you can do on most carbs is for idle mixture and idle speed, anyway.

If you have an idle mixture screw (most traditional carbs have one or more of these), the car will usually idle best with the screw turned a turn to a turn-and-a-half out. If you’ve got SUs, the jet should be nearly flush with the bridge.

If your car won’t idle well near these ballparks, it probably has incorrect jetting and needles or mismatched components—or something previously covered wasn’t properly fixed.

Once you have the idle mixture right, set the idle. You usually want it as low as you can get it—600 to 1000 rpm in most cases. While you’re setting the idle speed, turn on the headlights and as many electrical accessories as you can to ensure that the engine will still idle high enough when the charging system is working hard. 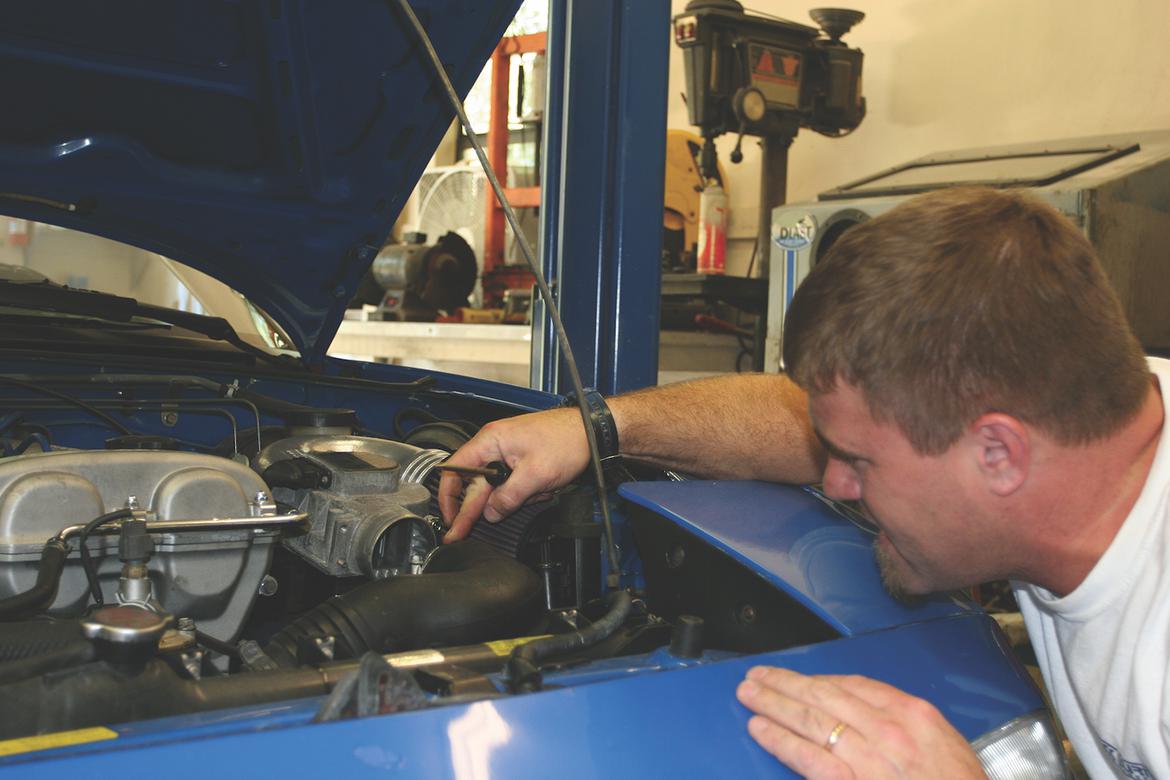 It also helps to have an engine operating at the right temperature (No. 7). On used cars, it’s important to make sure all the parts in the engine bay will happily work together (No. 8). There’s no telling what a previous owner may have done. For carbureted machines, check the basic settings (No. 9). On a fuel-injected car (No. 10), make sure all of the wires, meters and parts are properly working.

On newer, computer-controlled injection systems, there is very little you can do besides adjust the idle speed—and sometimes even that isn’t an option. However, the previously covered rules about vacuum leaks and cleanliness around electrical connections certainly apply.

With older injection systems, you can sometimes adjust the idle mixture, but before doing so you’ll again want to make sure that everything is very clean. On older European cars with CIS-type injection systems, cleanliness of the air sensor plate is important. It’s common to see these plates get weighed down with dirt or oil buildup, making the plate heavier and less likely to rise. This, of course, will affect the mixture adjustment. Clean the plate, and the car will run better.

Here’s a common problem: The car will run pretty well, but it won’t idle consistently. If this is the case and you haven’t found any vacuum leaks, then you can start suspecting the idle air controller—note that now we’re moving away from the tuning tips and more into a repair diagnostic procedure. This is common enough, however, that it’s worth mentioning.

With any injection system, cleanliness of the fuel is important. If the car has been sitting for a length of time, old fuel can gum up or crystallize and cause all kinds of problems. Try not to run the car too long or at all if it has old fuel—drain and dispose of it safely, as it can be hard (and sometimes expensive) to clean sensors, injectors and fuel pumps.

It’s Not Magic, but It’s Not Rocket Science, Either

Tuning a car isn’t rocket science, but there is a science to it. Tuning is about working with the entire engine as a system and tackling each part of the system at the right time and in the right order.

If you follow these tips in the order they’re presented, you’ll find tuning is much more of a science than a magic act. You may even save yourself some time, money and fuel in the process.

Brawn unsure what ‘optimum number’ of sprint races is · RaceFans

Brawn unsure what 'optimum number' of sprint races is · RaceFans