The most versatile car is a Mack truck? | Articles

What’s one of the most versatile vehicles ever made? A Mack truck.

At the helm of the 13,000-pound Mackvader, Mike Morgan has entered his 1998 Mack CH in several forms of motorsports: road racing, autocross, drag racing, oval track racing, top speed challenges and even drifting.

Mike dabbled in motorsports throughout his life, including autocrossing and road racing a Porsche as well participating in drag racing. However, when he heard of ChampTruck, a new road racing series for semis, the diesel mechanic wanted in.

“We traded two trucks for two halves of a truck,” Mike explains. “Some companies, when they’re done with a truck, they’ll cut them in half. It was cheaper to get two halves, and I’d get exactly what I wanted.

With parts in hand, Mike went to work.

“I put it together in a carport,” Mike continues. “The truck hasn’t seen a shop until last year. It lived in a carport and then a 130-year-old barn. We had cows walking around. We had chickens up in the truck. It’s a true barnyard build.” 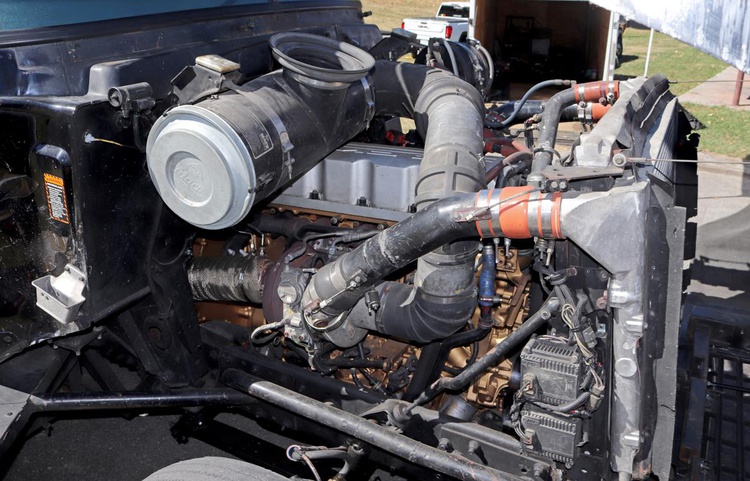 “It’s the same engine you would find in a garbage truck,” Mike says. “I figured if a garbage truck driver could beat the ever-living snot out of it all day long for years, that’s the engine I want.”

He runs the engine up to 3000 rpm. That may not seem high to most racers, but for a big-rig truck it’s quite a bit. For Mike, that’s about the limit to his comfort level.

“I don’t run a scatter shield on the transmission,” Mike says. “There’s a lot of mass in [the drivetrain]. I don’t want to see a clutch or flywheel come through the floorboard. I still want to live a long life.”

“On a road course or a circle track, when I come up to a turn, I typically use the engine brake,” says Mike. “The engine brake pre-spools the turbo. The whole time the engine brake is going, it’s building up boost. So when I’m ready to exit a turn, you get back down on the pedal and get instantaneous boost.” 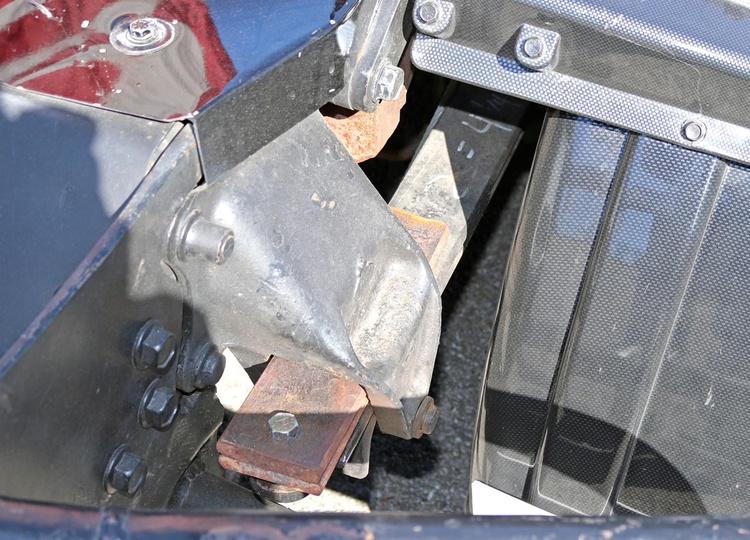 Mike says his truck uses stock components–and he keeps it simple. For example, he didn’t opt for an air suspension because if a standard suspension “is good enough for racers in Europe, it’s good enough for me.” However, don’t mistake this as the same truck that came from the factory.

“There’s a lot of old-school racing tricks that you can do,” Mike says. “It’s the same things you do to a car, just on a bigger scale.”

Let’s start with the rear.

“The rear axle, it’s adjustable,” Mike explains. “So we can turn the axle sideways a little bit and adjust pinion angles, drive angles and spring rates. We’ll push it back–about an inch to an inch and a half–to give it rear steer for turn-in on an oval.”

The shocks and springs aren’t that trick, he admits. “I got one of the cheapest shocks you can find,” he says. “It originally came with eight leaves, but now I got it down to one and a half leaves to get the correct spring rate. You start by cutting a chunk of spring out at a time–there’s no machine to determine the spring rate.”

Mike’s most common adjustment involves tweaking the tie-downs to clamp the ends of the leaves while also adding or increasing wedge. “To get this truck to turn on a road course or an oval, the tie-downs help with that,” says Mike. “You got to get the inside-rear tire just a little bit off the ground. That will help that tire break traction and get the truck to turn.” 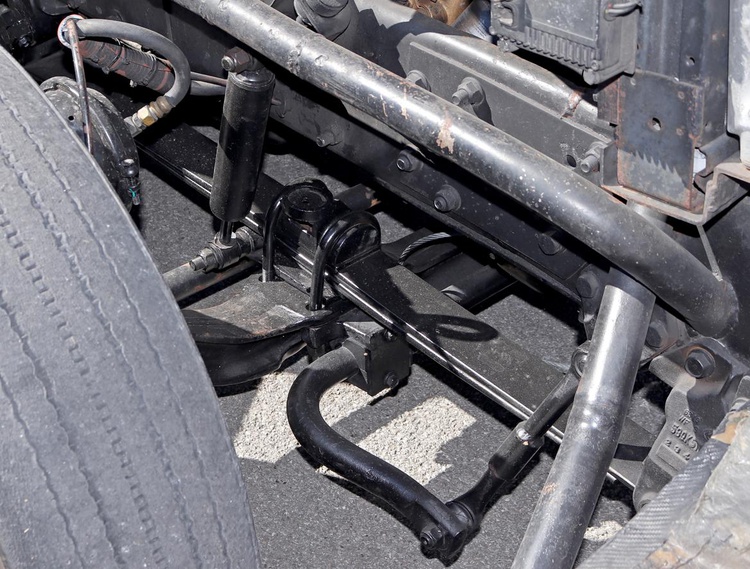 As Mike says, the truck’s just a big car–and caster, camber and toe are all important. But to change camber requires some creativity.

“We have tons of caster–up to 25 to 30 degrees,” Mike says. “If you push an axle far enough, when you turn the wheels, you’ll create camber. We also bend the axle to a certain degree to create more camber.”

[What Is Camber, Caster and Toe? | Handling Basics]

Mike uses an anti-roll bar on the front just like you would on a Miata–but his is a lot bigger.

“We have a sway bar up front, with a link on the left-front where we can pull down against the sway bar and change its rate,” Mike says. “We also got limit straps to limit how much roll we have in the front end.”

To stop 13,000 pounds of truck, Mackvader has brake drums on the rear and water-cooled 18 1/2-inch disc brakes up front. As with a car, Mike can use the brake balance booster to adjust the bias, and he typically uses more rear brake on a road course.

The Beginning of Mackvader’s Career 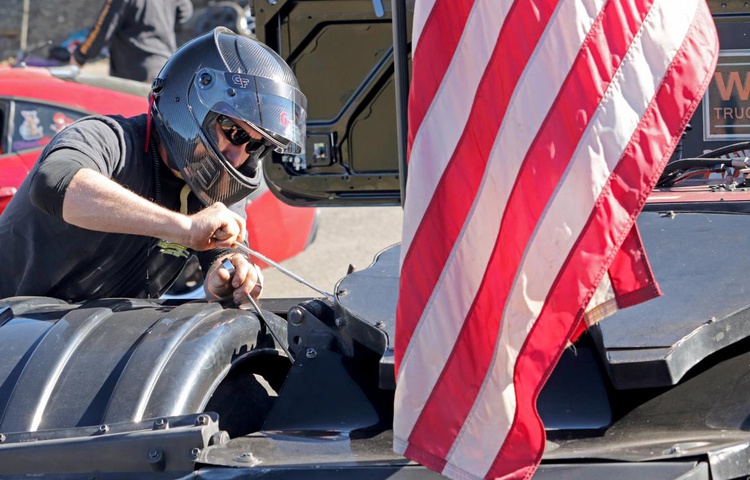 Mike debuted the truck in 2014 in ChampTruck.

“We towed to the first ChampTruck race, with a Dodge 3500 and a gooseneck trailer, all the way from Nashville to New Jersey [Motorsports Park],” Mike says. “I was the only one hauling their truck with a Dodge pickup. Everyone else had Class 8 semi-trucks hauling theirs. I just wanted to be a part of it. I expected to just race one or two races that season.”

“I won everything that weekend in New Jersey,” Mike recalls. “We kept on going. The next race was in California. I had never even been to California.”

The more Mike raced, the more he won, but the success didn’t stop him from trying to improve.

At an event in Colorado, 10-time champion of the British Truck Racing Championship Stuart Oliver came stateside to try the American equivalent of what he raced across the sea.

“I said to Stuart, ‘Drive my truck. Tell me what to do to make it better,’” Mike says. “He took it for one ride around the track and came back and said, ‘How do you drive this thing?’ The whole rest of the night, he and his crew are up all night partying. I’m there sipping a beer and listening to every word he said. I used that knowledge for the rest of the season and just whooped everybody’s ass.”

That incredible run led not only to the 2014 ChampTruck championship but also the 2015 title.

The series was then sold and turned into the Bandit Big Rig Series, and the action moved to ovals. Mike continued to win races.

A Mack of All Trades 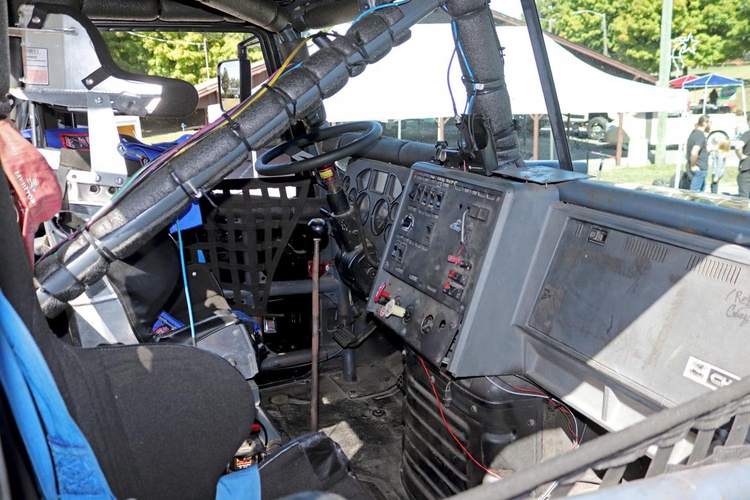 Mike doesn’t limit Mackvader to road courses or ovals. Anything is fair game.

For example, Mike drag raced Mackvader against a 2021 Ford pickup before a Bandit Big Rig Series event at Salem Speedway in Indiana. He had showed up the day before the event, and the track owner encouraged him to bring Mackvader to the next-door drag strip.

“It goes pretty good [on a drag strip]. You got to be ready, just like with an old-school muscle car. It’s not easy, but you can do it. You power shift that semi-truck.”

In a different attempt at straight-line speed, Mike ventured to The Arkansas Mile to see how far he could push Mackvader.

“We topped out at 136 mph,” Mike says. “We hit 132 mph at the half-mile marker. Sometimes lessons are learned the hard way. I lowered the cab that year, and I put two small 90-degree bends in the exhaust pipe to get it out under the cab. Those two small bends created turbulence in the exhaust outlet. The turbo freewheeled and did not create any boost.”

He also doesn’t mind just showing the truck, especially to kids or for a good cause. Mike brought the truck to Highland Rim Speedway outside of Nashville for a Down syndrome charity event. Mackvader met Darth Vader, and they auctioned off rides to benefit the cause.

The Bandit Big Rig Series shut down after the 2021 season. After that, Mike admits, he has struggled to find venues for Mackvader.

He autocrossed the truck during the Power Nationals at Nashville Superspeedway in September.

“It did very well,” Mike says. “The truck can be very nimble for as big as it is. It’s not going to beat out a whole lot of cars, but it will lay a decent time down, turn a lot of heads, and we’ll have fun doing it.”

Most recently, he entered it in an East10Drift event at Chilhowee Park in Knoxville, Tennessee. Mike learned some lessons that he’ll apply to another drifting opportunity.

“If I had a bigger track to play around with, I would use the engine brake a lot more,” Mike says. “When the engine brake comes on, it will slow down and lock up the rear axle and initiate the drift.”

[What in the world?! Did someone drift a Mack truck?]

In eight years, Mike Morgan and Mackvader have competed in a wide variety of motorsports across the entire nation. Admittedly, the truck has begun to show signs of its age.

“The truck has been beaten so hard over eight years,” says Mike. “It’s been over the wall, through a telephone pole, and took out the fence at Highland Rim [Speedway]. We took 30 feet of the soft wall at 140 mph at Bristol. It’s pretty bent up, and trying to repeat that same setup has been a challenge.”

However, Mike still has a few events on his wish list.

“I got an offer to bring it to a dirt track,” says Mike. “I want to run Pikes Peak before I’m done.”

Mackvader slingin’ mud on a dirt track? Mackvader doing a hillclimb? With 3000 lb.-ft. of torque pulling 13,000 pounds of truck? Who wouldn’t want to see that?

WATCH: Relive the action from last year’s Dutch Grand Prix ahead of this weekend’s return to Zandvoort