When Colin Chapman, the late visionary genius and founder of Lotus Cars, coined the maxim “Simplify, then add lightness” way back in the ’60s, he probably had no idea it would become a significant part of the automotive lexicon. And he most certainly could not have imagined it being used to refer to something like this street-legal, open-air kart based on a Porsche Boxster.

However, as Chapman proved, lightening a vehicle is a surefire path to more speed and better handling. And it’s a strategy Denver’s Dennis Demers has used to great effect in the creation of one of the most unique customized Porsches around.

And that admiration of not-a-911 Porsches extended to the company’s first water-cooled, mid-engine roadster. “I always appreciated what the Boxster offered for the money,” he adds. “Nobody else makes a solid-handling, mid-engine platform that can be had for under $20,000 used.

“I initially saw this car listed on Facebook Marketplace in crashed condition,” he explains of his 986-generation Boxster. “The owner had it on there for probably about six weeks and nobody bit. The car was hit in the front and down the side, so the front bumper, hood, passenger door, air bags and both fenders needed replacement.”

Around the same time Dennis spotted the crashed Porsche for sale, he’d become aware of the “death karts” popping up online in various forums and on YouTube. “Most of those are based on Corvettes and Miatas,” says Dennis, “and it just occurred to me that if I could build a mid-engine kart, it would really combine my love of go-karting and I could actually weld on some mountain bike mounts and have a perfect thing to take out to the mountains, drive the twisty roads and go riding.”

The plan behind this one: turning a Porsche–but not a 911–into a lightweight street fighter. The Ariel Atom provided much influence, but sadly, buying one simply wasn’t in the budget.

The more he pondered the idea, the more he realized that not only was a Boxster the best bang-for-the-buck platform out there, but the chassis layout was ideal for a kart. “I knew I wanted a mid-engine platform for the best weight distribution,” he says.

It also didn’t hurt that when he was younger, Dennis owned a street-legal sand rail. “Ever since then, I’ve always loved open cars,” he explains. “The Ariel Atom is one of my favorites, but its lack of practicality and high price kept it firmly planted in the ‘wish’ category for me.”

With a rough idea of what he could do with the Boxster platform, Dennis made an offer of $1600. A short time later, the Porsche arrived at his house on a trailer. 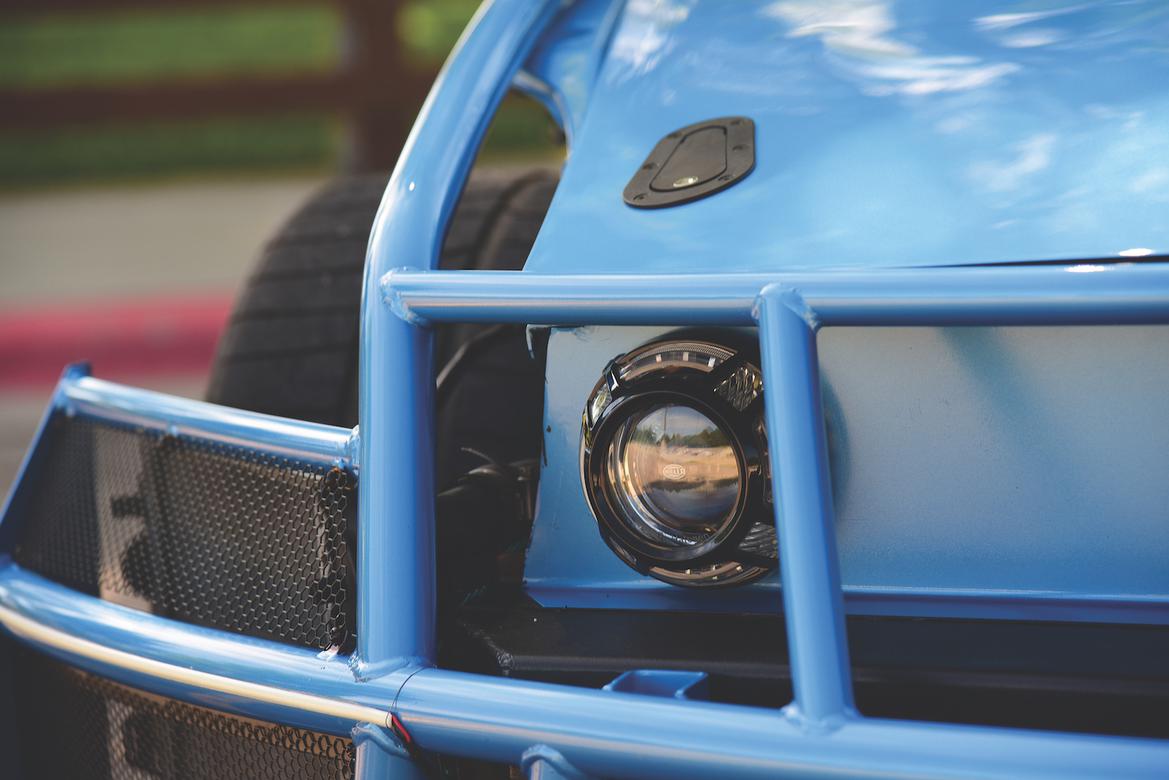 A closer look revealed minimal frame damage. Even better, the only real mechanical issue turned out to be a damaged radiator. In fact, the car was so solid that Dennis almost scrapped his kart idea and briefly considered simply repairing it.

After some cursory research online, though, he realized that the cost of OEM–or even aftermarket–replacement parts would quickly exceed his initial investment, which admittedly was not very much. “Upon inspecting the actual damage,” he says, “it turned out to be perfect for the kart conversion.” 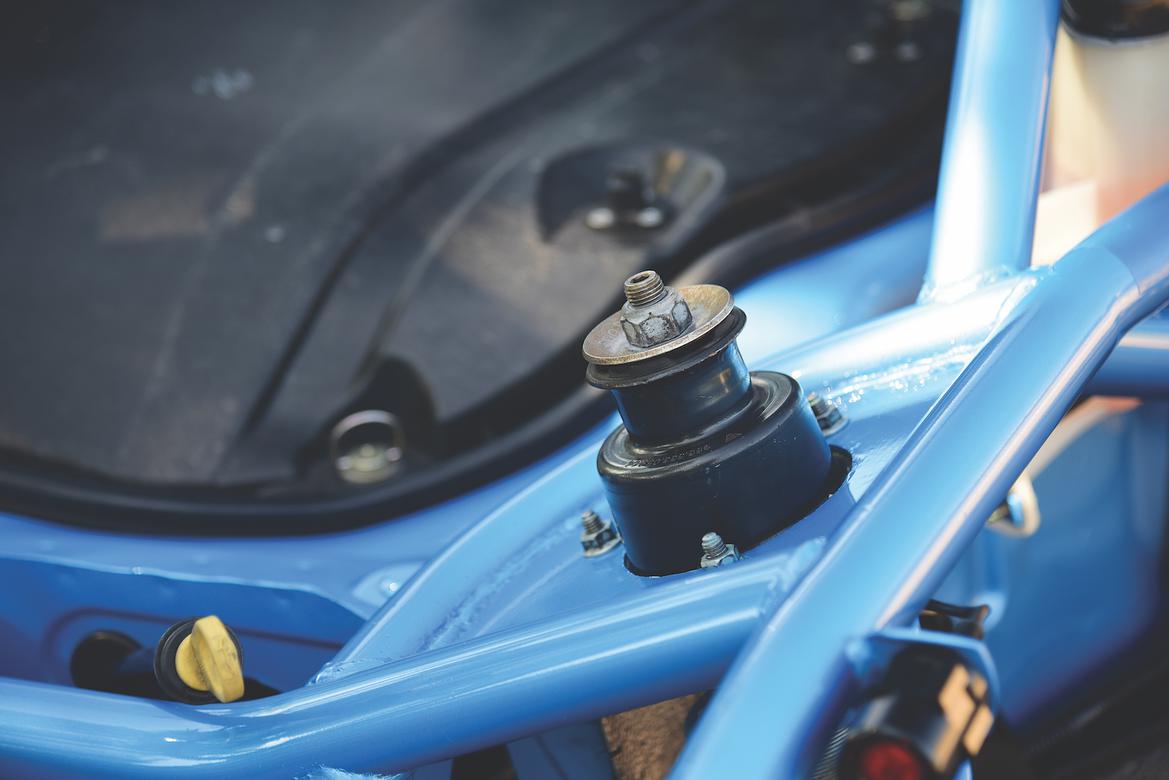 The day after Thanksgiving in 2020, Dennis started stripping the Porsche’s body and chassis of anything that wasn’t essential to keeping it drivable–a process that took some research. “I investigated the frame structure of the 986 Boxster to determine how much could be removed,” he explains. “I also read several metal fabrication books and watched lots of videos on roll cage fabrication to learn how to properly design the roll cage as well as what materials to use.”

He used 1.5-inch-diameter DOM steel tubing in 0.120-inch thickness for the roll cage. He admits that chromoly steel would have been a bit lighter, but it’s also four times the cost and is often TIG welded. He used 11- and 14-gauge flat steel for the brackets and reinforcing plates. 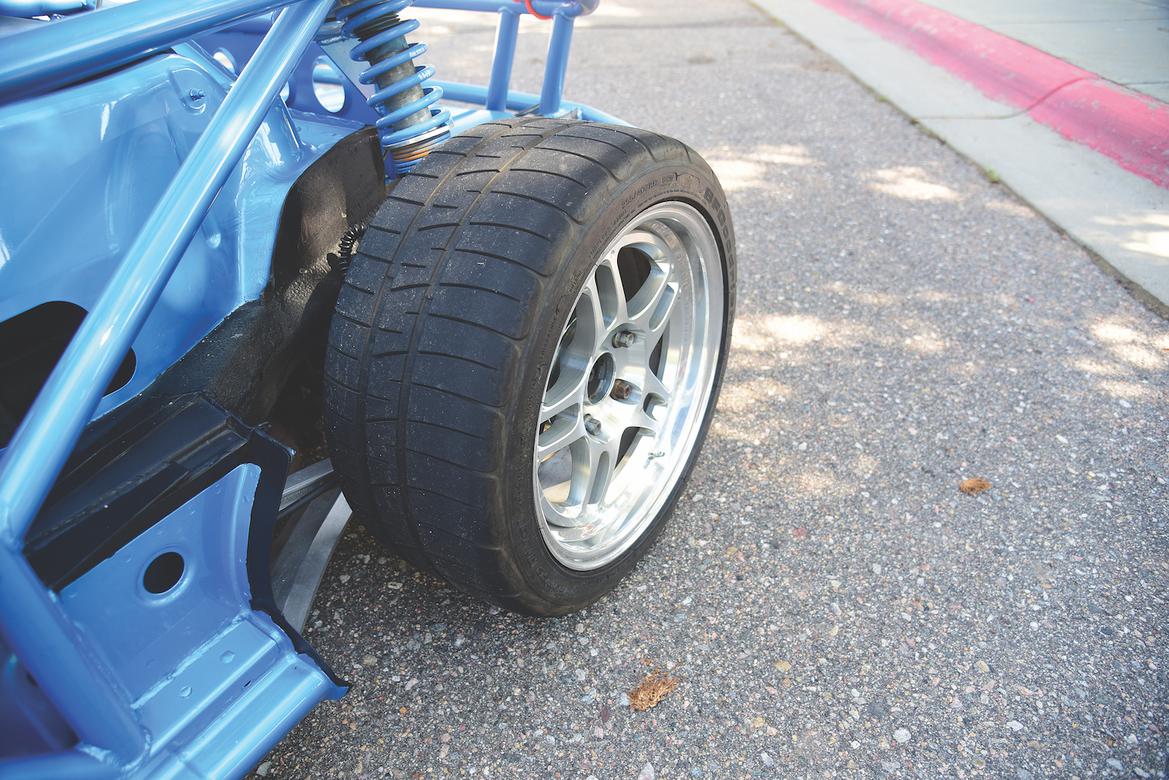 His tool collection, as expected, quickly grew, and soon his garage was populated by a welder, tubing bender, tubing roller, angle grinders, a Sawzall, a plasma cutter, a chop saw–and, well, you get the idea.

[10 Must-Have Tools for a Scratch-Built Car]

Wielding his arsenal of tools, Dennis enthusiastically added lightness. From the front bumper to the rear, every body panel of the Boxster was removed except the hood. 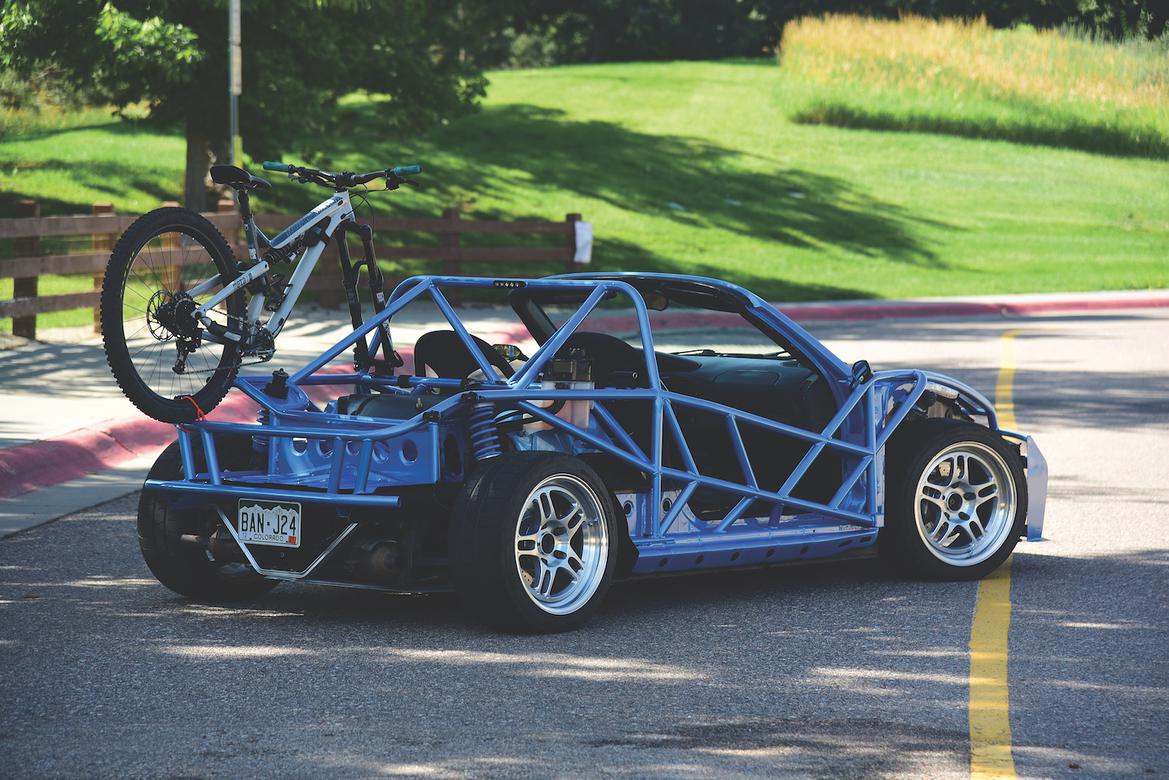 Look, it’s practical, too. This lightweight Boxster kart can haul a bike.

The next step was slicing off unneeded sheet metal from the unibody. Even the rear upper strut mounts were removed, which meant fabricating new plates for the shocks to bolt to. To accomplish this while keeping the suspension geometry to its factory specifications, Dennis welded in the custom upper shock mounts, installed the dampers, and then continued removing any sheet metal that wasn’t critical.

While he was deleting bodywork, Dennis was building what amounts to an exoskeleton to keep the kart’s structure rigid enough to remain safe on the road. “One big challenge in adding a roll cage to a unibody car is that you have to weld in plates between the frame and tubing to dissipate potential crash forces,” he notes. “With this build, there were no large surfaces suitable for standard plates, so I created braces with additional plug welds and reinforced those in different axes to achieve the same effect.”

Once the roll cage was fabricated and welded together around the Porsche’s stripped-out unibody, Dennis delivered the car to a friend’s paint shop. He chose a color he found on a mountain bike, though it happens to look very much like the factory Porsche hue of Mexico Blue as well as Toyota’s Voodoo Blue. 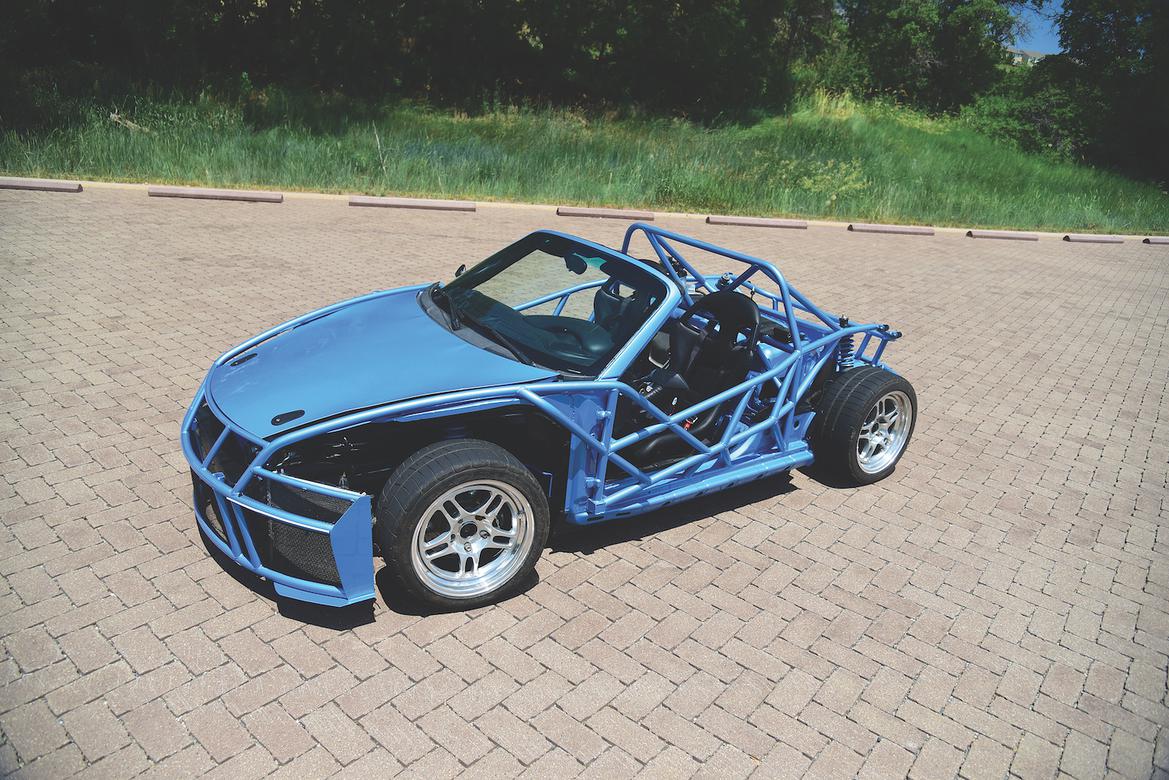 Boxster DNA shines through despite all the fabrication, as the dashboard and shift knob were sourced from the donor vehicle. The hood also came from a Boxster–it’s just been repositioned a bit.

Now to add illumination. The removal of the bodywork meant there was no longer anywhere to mount the front and rear lights, so Dennis added some Hella headlights–DOT-approved components from a Polaris Slingshot. The headlight rings are modeled after those found on the Panamera and, like other modern Porsches, use four LEDs. The brake lights and taillights are universal and were originally intended for motorcycle and ATV applications. And the front grille mesh? Inspired by the Porsche 918. 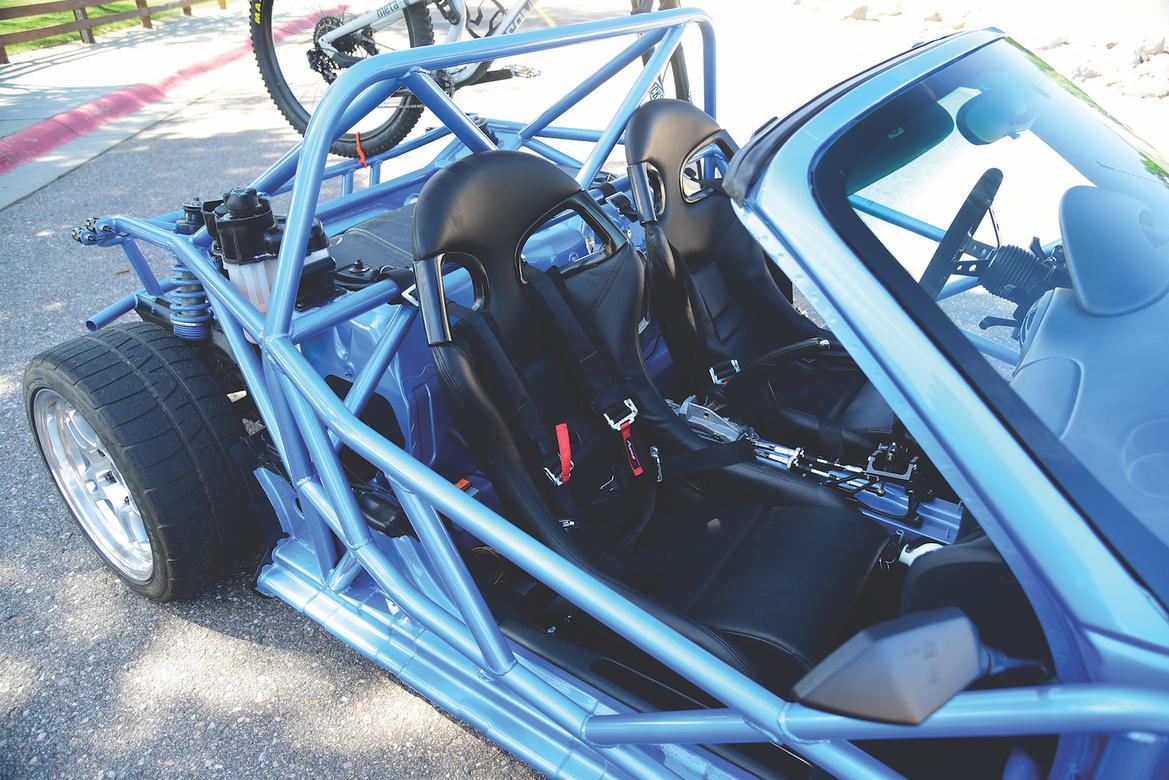 All the wiring runs through the roll cage, so it’s hidden from view. Dennis relocated the ECU and rear relays to behind the passenger seat, where they’re also largely out of sight. He also moved the coolant reservoir and oil fill tube to allow room for the added bracing that spans and reinforces the rear shock towers. 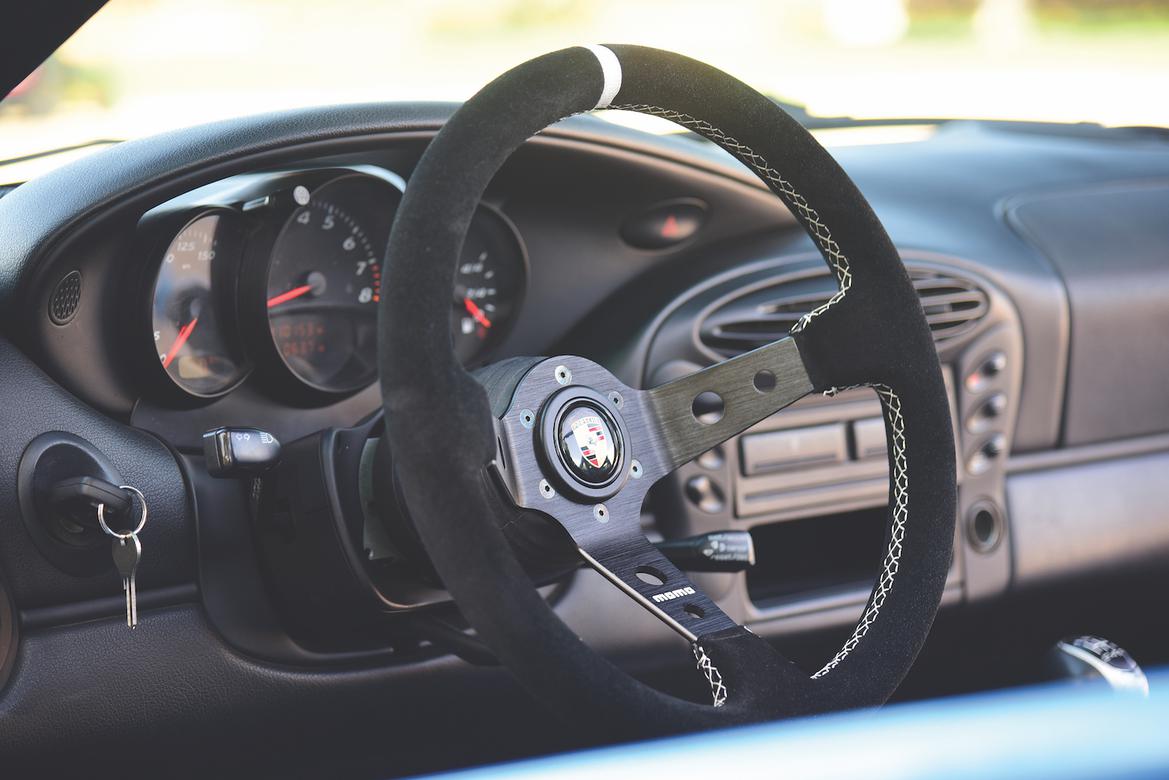 A set of adjustable coil-overs–a Bilstein PSS9 setup–was required to return the extensively lightened chassis to its lower stance. “I knew the car might sit too high and ride rough after removing so much weight,” he explains, “so I wanted the adjustability for ride height and compression rebound and damping.” The rest of the suspension remains stock. 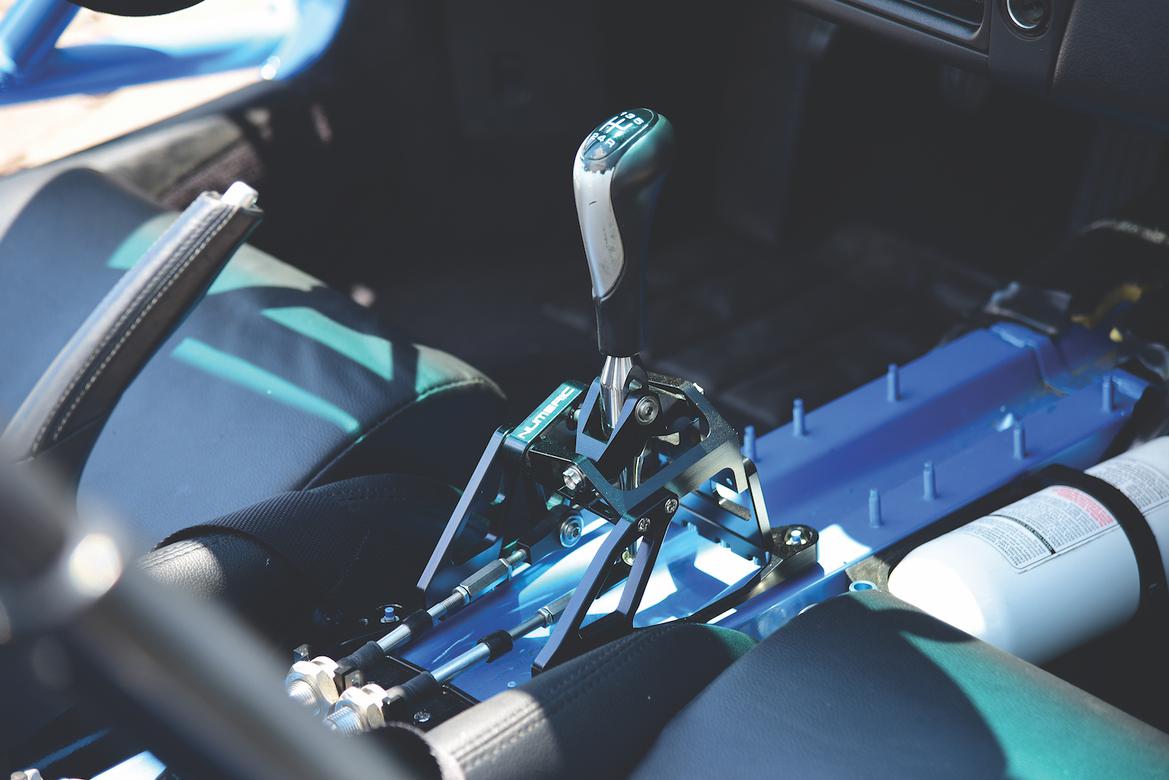 From the result I’m surprised this guy wasn’t a professional fabricator when he started the project…also might be a true mountain biker since that bike could cost more than the car!

I would add a partial cycle fender to the back of the front tires and to the front of the rear tires.  Thinking about it more I think you would have to do that for it to pass the yearly inspection to be road legal in my state.

I have yet to see one of these homemade, tubeframe monstrosities that is remotely attractive. The worst of them are deathtraps with no sense of engineering, triangulation of structure or even raw strength. You may say that they are functional and light but why make something ugly when you can make it attractive for the same effort and money?

Did I miss in the article how much the car now weighs? I couldn’t find that nugget.

I was wondering the same.

Ugly is personal. Some probably prefer it this way. As for triangulation, it looks like this guy did a good job. It may be safer than the factory car. Surely stiffer.

Everyone has different taste but bashing someone’s hard work out of the gate seems kind of Bob Costasey.

The builder showed a lot of skill to build that. Nice job Guy who built the car, you can’t please everyone.

You call that a Boxster?

this is a Boxster

actually awesome work, I’ve been following that build. The workmanship is top notch.

…… when you can make it attractive for the same effort and money?

If the Judge Judy part was a typo, keep it. Its accurate.

Half of the fun is pissing off thin skinned wankers.

I’m honestly not sure how you could make something too much better looking than that with only tubes. Depending on how badly it was wrecked, I’m not sure it would have been the same or less effort to repair it properly. Plus then it still would have looked like a 986 boxster, which…honestly this looks a lot better.

I found a video elsewhere that claims 2150 lb. That’s lower than I would have thought but seems believable.

This isn’t Youtube or some such. If you like to say things just to set people off, take it elsewhere.

Having built an Exocet, I can attest to how much work this would have been, starting with a full car and having to fabricate your own bits. The result obviously shows a lot of love and effort, well done!

I use this quote on a regular basis.

I like it but, I have never been accused of being sane. I would drive it just about everywhere.

“Who died and left you Judge Judy and executioner?”

just in case there are people around who care…

Yeah, me too.  Author Zach Mayne went on and on about how much lighter it is, then never told us what it weighs.  That article could have used a spec panel like most of its kind do.

Las Vegas track ‘good for racing, not the most exciting to drive’

How to prepare a new race car for track duty | Articles