At 38, racer Patrick Long is the only American Porsche factory driver, still has plenty of years left as a sports car racer. After all, his mentor, fellow Porsche shoe Hurley Haywood, scored a podium finish in the 2012 Rolex 24 At Daytona at age 64. But Long has seen a quantum shift in professional racing since he began his top-level pro career in the American Le Mans Series in 2003, when he was 21. And it makes him feel just a little bit old.

That quantum shift: online racing and coaching, specifically using iRacing. “I absolutely wish I had access to laser-scanned race circuits to utilize on simulations as an up-and-comer,” Long tells Grassroots Motorsports. For new drivers, he says, “it’s a huge tool.”

On iRacing—as well as its central premium competition, Assetto Corsa and rFactor 2— the realism far exceeds what was available to Long as he was coming up.

“In the late 1990s,” Long says, “we had some pretty solid video games that at least could help teach you a track’s layout.” Then YouTube began collecting videos from onboard cameras, and that helped teach drivers the proper lines on many race tracks.

“But then came iRacing and rFactor,” Long continues, which allowed rookie racers to “drive” a circuit that included all the track’s characteristics—the bumps and dips and curbs and pits. And they could drive the track in a virtual car that behaved very much like a real one and even allowed for basic setup changes. “You can see it now in how quickly a driver who is new to a track gets up to speed,” he adds. “It’s staggering how much it has accelerated the learning curve.”

Still, Long says, “I see sim racing and car racing as separate sports. However, a lot of the mental processes are very, very similar. I still don’t see the ability for a sim racer to change straight over to a car on track, but the sim racer with real racing in his or her past can progress very quickly.”

Example: Jaden Conwright, a 20-year-old California driver who started his career in open-wheel racing and won his first single-seater championship at age 14. He raced in Italy and Asia in Formula 3 and Formula 4 before making a move last year to closed-cockpit racing, in the Porsche Carrera Cup Italia series. He needed sports car experience, fast, so he turned to iRacing. During this unexpected offseason, he’s been keeping his skills sharp by spending 6 to 10 hours a day on his new sim. His goal: “to get back up to pace as quickly as I could.”

The real Porsche 911 GT3 Cup car and its iRacing counterpart are actually very similar in feeling and technique to drive. You can drive the car more aggressively and slide it around more in real life compared to the sim, but the overall technique with steering and brake release are almost identical,” Conwright says.

Aiding in the progression is online coaching. Peter Krause (peterkrause.net), one of the most respected racing coaches in the U.S., was a very early adopter of computers as aids in his training techniques. He started out using the then-available rudimentary games, and he progressed as the technology did.

“I was using Grand Prix Legends and Gran Turismo more than two decades ago to train drivers,” Krause explains, “and I was beta-testing iRacing as early as March 2008.”

“I don’t think sim equipment needs to be complicated or even very expensive to gain good benefit from using a simulator,” Krause tells us. “It’s rather amusing that this pandemic has highlighted this as a viable alternative to ‘real racing,’ but in fact, it’s been that way for some time.”

It doesn’t take a pricey, triple-screen hydraulic sim to learn, Krause adds. “Something as simple as a Logitech wheel with a load cell pedal modification—it makes the brake pedal feel ‘real’—and a reasonable computer and monitor can be enough to start out.

“The key is not to look at driving in the simulator any different than the real car. You start slowly, add speed gently, and you’ll gain confidence. It definitely does take some getting used to. Without the kinesthetics, or feel of the car jostling you around, the braking g’s, cornering g’s—it falls to your hands and your eyes to determine when the car begins to slide.

“To me, that’s one of the great benefits: the training to recognize the rate and speed of build of yaw before it becomes a problem. I spend a lot of time just pounding around, doing laps. Like real life, I start the session with a highly targeted goal, concentrate on that goal, then measure my results and fine-tune.”

Krause says that when he began his one-on-one coaching business almost 15 years ago, “I made the pledge to use all of the current technology to leverage improvement. Data and video were one aspect; simulators were another. Most all of the people I work with function at a high level, with 10, 20 and some with more than 40 years of podium-level experience in club, entry-level pro and historic racing.”

In person, “sitting next to my client, I can see the way they manipulate the steering wheel and pedals and where they’re looking, and can provide immediate feedback,” he explains. “But I’ve also worked with drivers remotely, where they’re at home on their sim and I’m at home on mine, in a virtual private hosted session. It’s not about racing each other. It’s about starting out with stopping at each corner of the track and delving into a discussion of detailed topography, landmarks at track level and eye level and above, as well as what the car is expected to do at various points around the corner.”

As far as recent technology goes, Krause says that there’s big buzz surrounding “virtual reality headsets versus a single- or triple-monitor setup.” He likes VR but suggests you progress gradually if it’s new to you: “There is a disconnect between what the brain sees and what the inner ear feels, and some people experience disorientation and nausea. That’s why I recommend starting with a single screen, then moving towards triples or, better yet, to the immersive world of VR using an Oculus or HP headset.”

Krause says that another valuable function of the simulator is “sweeps,” when you “go through the entire adjustability range of the suspension, alignment, gear ratios, tire pressures and all adjustable parameters to see what happens. This is how cars, teams and drivers are fast right off the trailer.”

Bottom line, reports Krause: “I know few people who drive at the highest levels who have not incorporated some level of simulator use.” 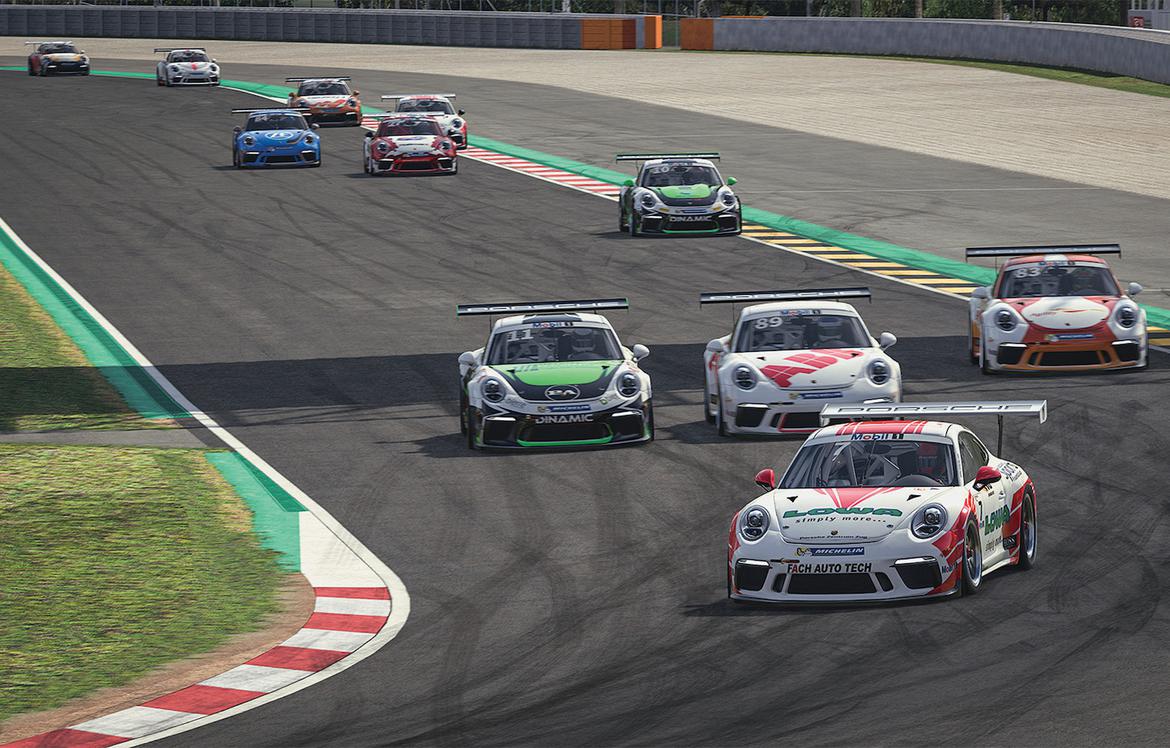 Even so, some professional drivers, including one who has an overall Rolex 24 At Daytona victory, haven’t embraced it. “I’m just not an iRacing sim guy at all,” says Ryan Dalziel, 37. Dalziel is the founder of Race Car Coaches (racecarcoaches.com), which matches driving coaches with students. The site’s instructor lineup ranges from IndyCar’s Paul Tracy to IMSA’s Jordan Taylor, but also includes proponents of online training, such as Krause, Kris Wilson and Elliott Skeer.

“iRacing allows me to do live coaching sessions directly and safely with individuals across town or halfway around the world,” says Wilson, who is—or was, anyway—set for an SRO Pirelli GT4 America SprintX season with John Allen in a Mercedes-AMG GT4. “We can even provide a list of things for the client to work on before we meet again. It’s like a personal trainer for racing.”

Skeer, a former IMSA GT3 Cup champion who is planning to race in Asia this season, is an experienced coach and a “firm believer” in using simulators in general, iRacing in particular, as a safe and cost-effective teaching tool, especially during this pandemic.

Skeer drove for C.J. Wilson Racing in 2013 in the Mazda MX-5 Cup series, which, in virtual form, is usually the most popular single series on iRacing. Skeer won five of the 11 MX-5 Cup races that season and credits his experience on iRacing for his success.

After 10 years on iRacing and having worked on the development team for sports cars with the company, what changes has Skeer seen? “Starting out on PlayStation and other games,” he says, “I was always hunting for realism, and I found it on iRacing.” Even so, he adds, “in the earlier days, there were limits-tire wear really didn’t register, for example.”

Now, Skeer says, “it’s just gotten better and better.” Tires wear, reflect pressure alterations, and respond to changes in track temperature. “In a 24-hour endurance race, marbles build up to the point where you can’t risk driving off the racing line, just like in a real race. It’s amazing. If there’s shade on part of a track, the pavement cools, and that changes the handling on that portion of the circuit.”

Skeer says 90 percent of the driver coaching he does now incorporates iRacing. As far as equipment goes, he doesn’t believe that high-dollar rigs automatically translate to a more accurate experience. “If you splurge on anything,” he says, “I’d suggest you spend it on the brake pedal. More than anything else, having brakes that feel real seems to change people’s perspectives.”

As for virtual reality, Skeer said it isn’t for everyone–he suggests finding a friend who uses VR and trying out their headset before buying one. For the majority of sim racers, “a single screen is just fine.”

So where are we headed with online racing–as a hobby, as a way to enhance a career, as entertainment to watch even if you aren’t a gamer? Is the pandemic and the resulting shelter-at-home interest in online racing what Skeer suggests is “a potential kickstart” for the industry in North America, and around the world? Or is it an aberration in which interest will quickly fade as true on-pavement racing eventually returns?

Or will it put new fans in the stands, and new racers on the track?

Doug Fehan, who started working for General Motors in 1988 with the mandate to evaluate not only GM racing programs but those of its competitors, began the current Corvette Racing program in 1997, first with the C5 and progressing through the C6, C7, and now the C8.R mid-engine GT Le Mans team.

Yes, between Zoom meetings as he shelters in place, he’s been paying close attention to iRacing and the televised sim races. And he’s intrigued. “It might be a perfect confluence to alert people to a new way of doing things. Watching one of the NASCAR races, unless you had a really good TV and were paying close attention, it looked like the real thing. They really have that sense of realism down.

“But the question is: How do you incorporate the two? I’m hoping that with iRacing, we can maintain that motorsports mentality, and perhaps it’s introducing new people to the sport. And when the real racing comes back, maybe some of the people who have seen iRacing, or driven it at home, will come out to our events, looking for the sound and the smell and the feel of the real thing. The best we can hope for is that we keep our existing fans engaged but attract new people–and start out with a freshened fan base as we get back to business.”