How did Formula 1’s established American race compare to its new Miami round earlier this year? RaceFans’ US correspondent offers his view.

This isn’t my first rodeo, but the excitement of being here hasn’t faded. Last year, attending the United States Grand Prix at Circuit of the Americas felt like a once-in-a-lifetime opportunity to be in the Formula 1 paddock. Now I’m back for a third time, having attended the inaugural Miami Grand Prix earlier this year.

The day began early, before dawn in the cold. After two flights, the warm sunny skies of the city of San Antonio greeted me, and after a drive north up Interstate Highway 35, I went straight to the track as the day’s media activities were beginning. I didn’t even have time to take my backpack off before I was in a scrum alongside other reporters talking with Ferrari’s Charles Leclerc. After that, straight to the drivers’ press conferences to hear from Lewis Hamilton and others, then right into another scrum with the now back-to-back two-times world champion, Max Verstappen.

The day was a blur, spent in the company of the drivers and team principals with little time to pause for thought. Of course, nearly all of them had a chance to weigh in on the Red Bull budget cap controversy, and many of them had forthright views on the matter.

The day ended with a barbecue thrown by local team Haas. However their announcement of a new title sponsor and the relaxed atmosphere of the evening dinner, was tinged by the sad news of the passing of one of their own – Harvey Cook, a garage technician who fought his battle with cancer to the very end of a life all too short. The team donned black armbands in his memory for the rest of the weekend.

I expected to wake up in the morning to a resolution in Red Bull Racing’s cost cap breach, as there had been whispers the team would hold a press conference before practice began. But early on came word there would be no announcement, the team and FIA seemingly not yet seeing eye to eye on the matter.

Shortly after arriving to the track I was on my way to the support series paddock. I was excited to see the collection of recent vintage sports cars that were taking part in the Masters Endurance Legends races this weekend, and the vintage Masters Formula cars as well – though some of the sports cars felt a bit too young to be classed as ‘vintage’ to me.

While cruising that side of the paddock, it was hard not to feel the absence of the W Series. I had seen their third season begin in Miami for its opener, before financial problems forced them to call an early end to the championship before they returned to the USA.

At midday, the arrival of screen actor Brad Pitt captured the attention of most people in the paddock. For me, that took second place to a chance to glimpse the 2022 cars up-close during the car presentations, just before first practice. 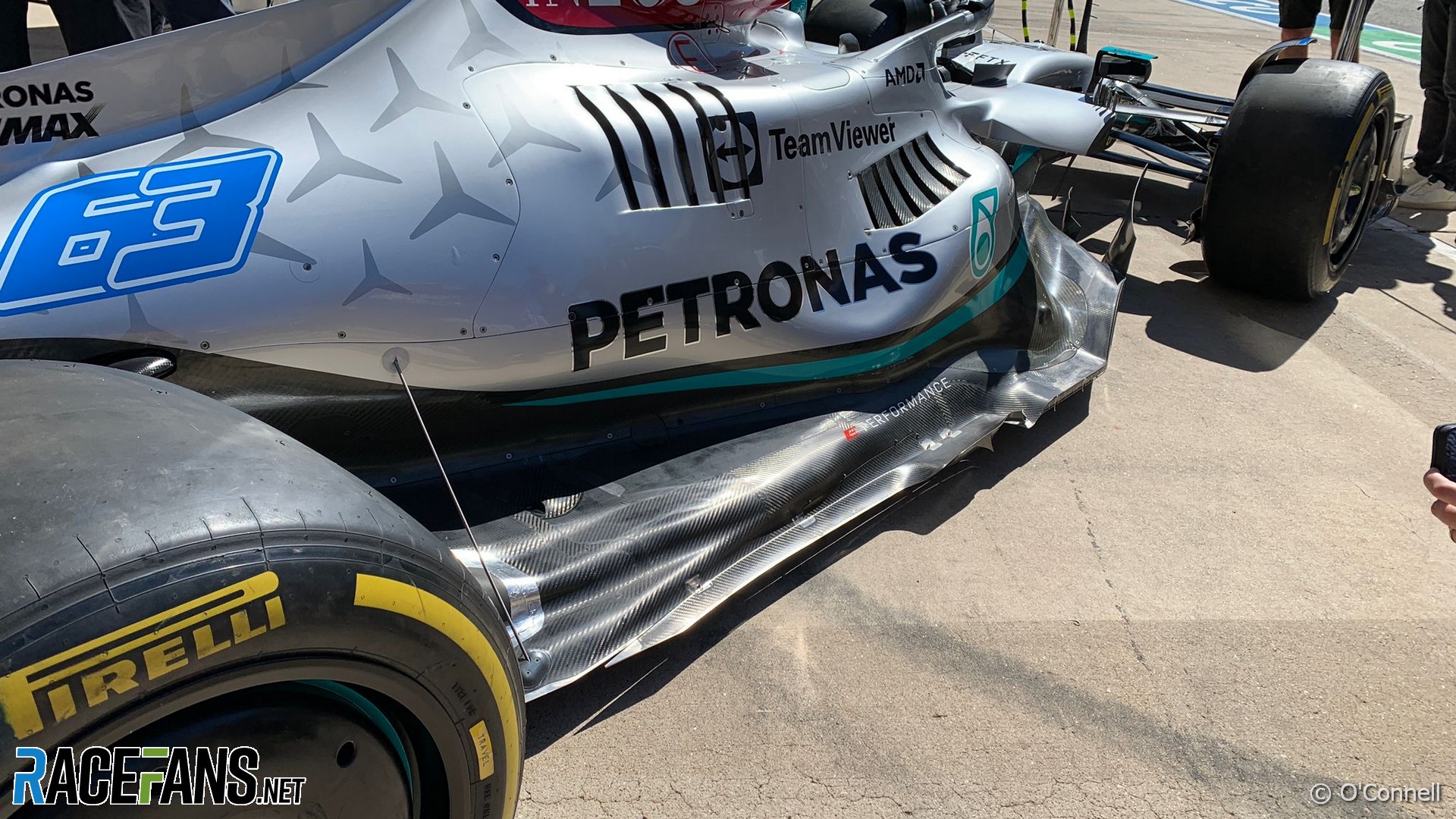 Mercedes brought their last wholesale upgrade kit in their bid to avoid a win-less season, including a front wing design they did not run. Alpine brought a new floor to help them maintain fourth in the constructors’ championship, and Alfa Romeo did the same in their bid to fend off Aston Martin for sixth.

Exploring COTA’s sprawling campus, I took a trip to Lonestar Land – a miniature exhibition of Texas tourism, cuisine, and drink. It may not have been the full experience of waiting for hours in line to dine in at one of Texas’ top barbecues, but the pop-up from Guess Family Barbecue was worth the money.

Alex Palou was beaming with joy after completing his first race weekend Formula 1 session in FP1, setting times on the medium compound tyre that were just three-tenths of a second off what Lando Norris could do on the same rubber in the other McLaren. It had to feel gratifying for any hardened IndyCar fan or pundit who wanted to prove that the best of their best could hang with the best of F1’s best.

Incidentally, Palou is one of those drivers whose surname provokes a variety of pronunciation interpretations. He told us it’s said: “puh-LOW”.

A handful of other drivers spoke to the written media after practice, including Pierre Gasly, Yuki Tsunoda, Kevin Magnussen and Mick Schumacher. Plus Antonio Giovinazzi, who was eager to play down the implications of his crash five laps into practice for his chances of getting back into a full-time seat for the 2023 F1 season. 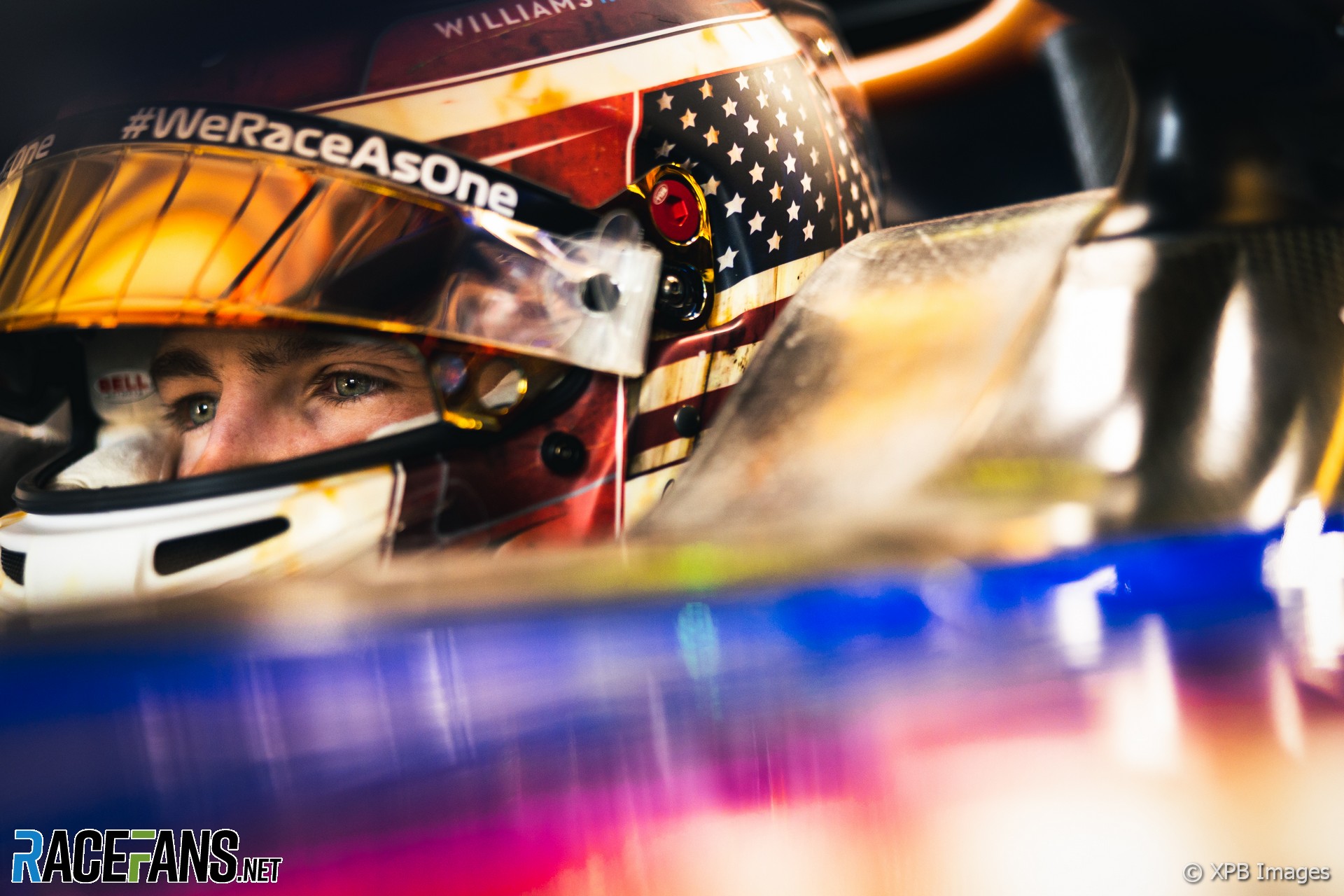 Upon arrival, I took advantage of the opportunity to venture to the top of Circuit of the Americas’ famous observation tower, to see the people filing in from all over the circuit campus, and take in the rural landscape surrounding the circuit. The skies that were cloudy and grey at sunrise cleared and made way for another beautiful sunny day just on the outskirts of Austin, perfect weather for a day of final practice and qualifying.

There was an incredible tension in the team principals’ press conference, where Christian Horner of Red Bull Racing bit back at accusations of cheating levelled towards the team that he oversees. Chief among these was a letter to the FIA from McLaren Racing CEO Zak Brown who, conveniently enough, was seated right next to him. The pair exchanged the kind of barbed responses that left you wondering how they kept their mutual hostility in check.

Following Logan Sargeant’s successful practice outing for Williams on Friday, the team confirmed he would have more runs before the end of the year. During the team principals’ press conference, CEO Jost Capito confirmed the 2023 seat will be Sargeant’s – if he collects enough superlicence points. 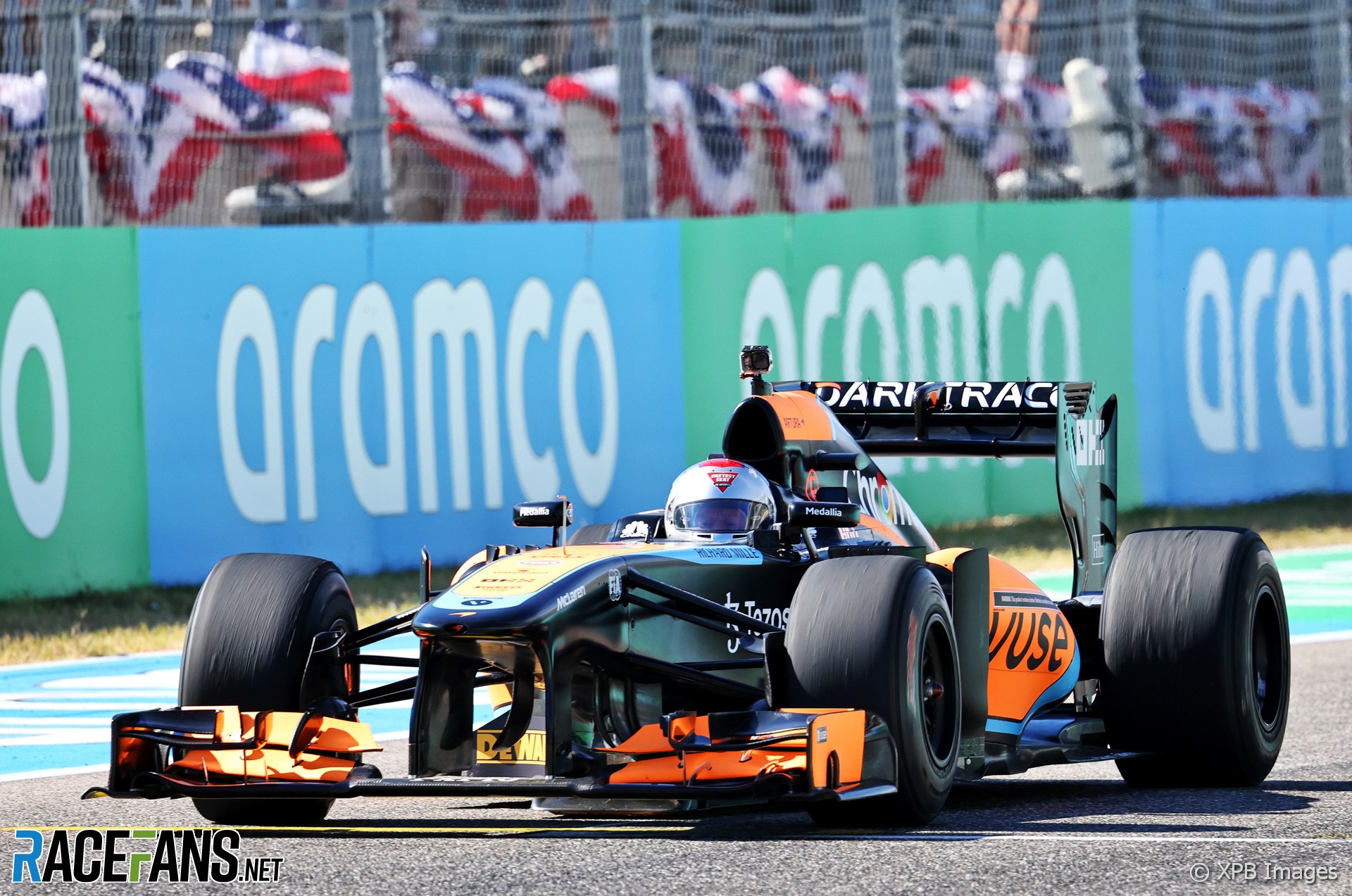 In a separate session with the pair for selected media including RaceFans, Sargeant described his excitement at the provisional announcement of his seat. It will make him just the fourth American F1 race driver in my lifetime – and only the third with a full-time contract.

Fittingly, the announcement came at the venue where Williams first brought him onboard as a young driver. Given where he was after narrowly missing out on the Formula 3 title in 2020, it seems almost impossible that he got here in the end.

In an ideal world, of course, he and Colton Herta – the other, more fancied, more prominent American F1 hopeful – would each have a spot on the grid. But then the same could also be said of Palou and Formula 2 champion Felipe Drugovich.

Along with the support races – and the once-in-a-lifetime chance to see Mario Andretti, all 82 years of him, suited and booted for one more ride in a Formula 1 car – the day was spent observing FP3 and qualifying, figuring out how the grid penalties would be applied after a tense qualifying session, and marvelling in the sights of the crowds.

But unquestionably the biggest story of the day was the news of Red Bull co-founder Dietrich Mateschitz’s death, which was announced shortly before qualifying began. As many drivers pointed out after the session, they may never have reached this level in motorsport without his team’s backing. 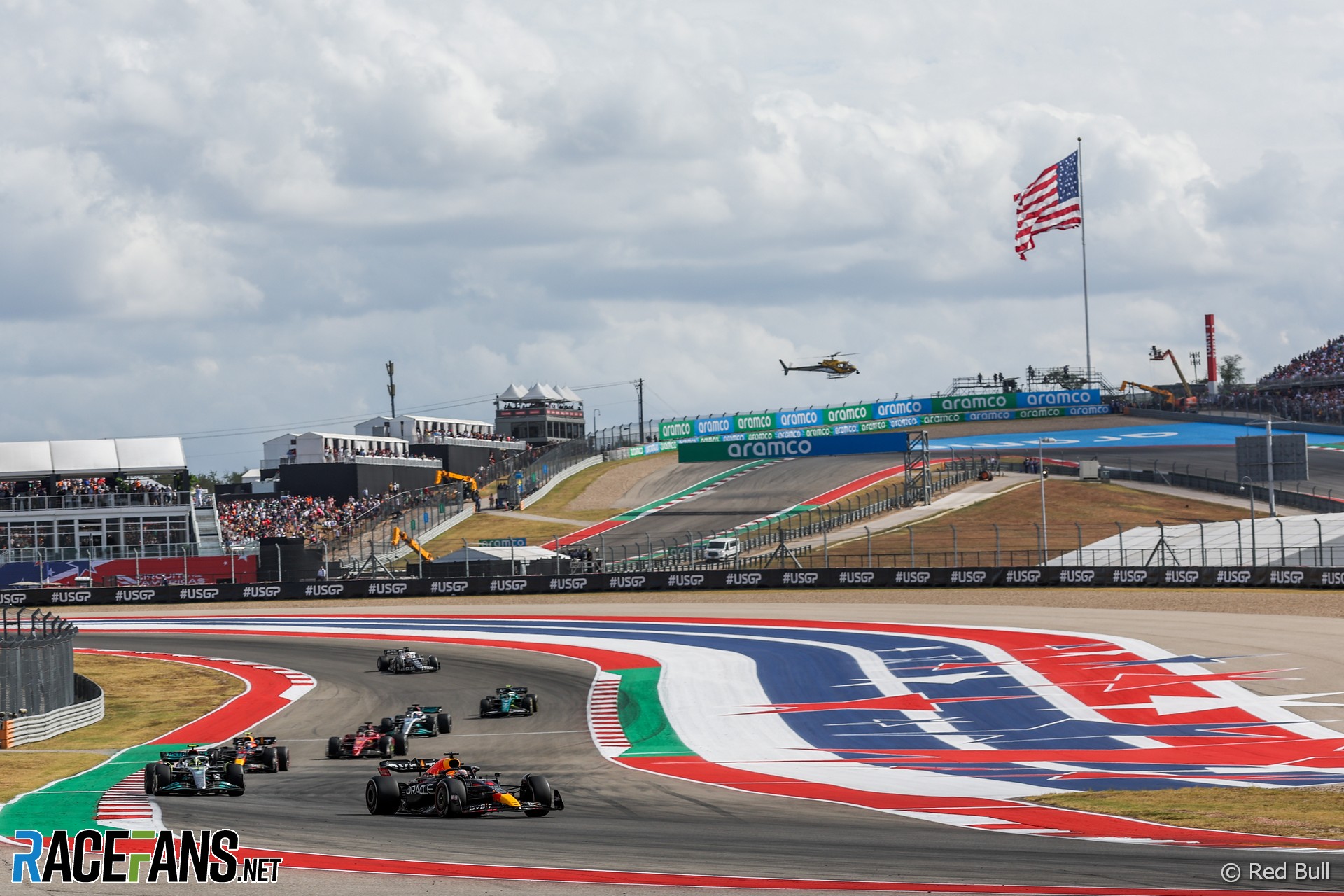 Before sunrise, a crowd of spectators queued up to get in for race day.

The paddock was buzzing with the presence of A-list celebrities and VIPs, with sporting titans like Serena Williams and Shaquille O’Neal among them. But unlike in Miami, this race felt less like an extravagant gala, and more like a proper grand prix that is by far and away one of the biggest events of the year in terms of its scale and swell of humanity. It has its extraneous gimmicks, for sure, but without the entire event feeling like a gimmick.

The needle has moved well beyond whether Circuit of the Americas can sustain itself as a world-class racing venue, and any lingering talks about whether the American sports fan ‘gets’ F1 really shouldn’t be paid any mind. I only hope that Formula 1 feels the same and isn’t tempted to leave this circuit behind just because Austin isn’t a top US media market like, say, Miami, Las Vegas or even – as the latest rumours suggest – New York City. 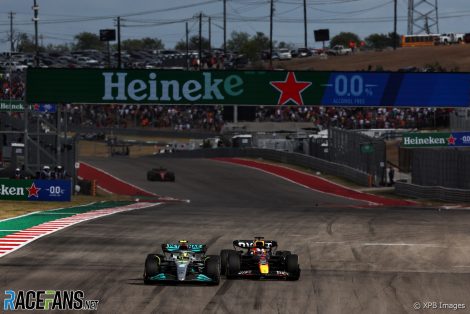 In the morning, I had another chance to look at the upgraded cars and hear from the brains behind them. From the pit lane, I could see the grandstands at the summit of ‘Big Red’ – the mountainous turn one that has become COTA’s signature corner – packed with fans.

The hectic post-race press scrums and the close quarters with some of my more experienced colleagues was worth the terrible network connectivity trying to deliver what I could in order to help make RaceFans’ coverage of this event possible.

The race itself delivered some familiar themes: Max Verstappen overcame the odds to win, Lewis Hamilton’s bid to end his win drought – and ensure a 16th straight winning season in F1 – was dashed again. There were some great battles throughout the midfield. Sebastian Vettel wound back the years with race craft that the greatest detractors of his prime once thought was outside his abilities.

Finally, there was stunned amazement that Fernando Alonso scored points after ramping off the back of an errantly-moving Lance Stroll – and even greater astonishment hours later when the stewards took those points away from him.

Sure, this race may have been a ‘dead rubber’ as far as the drivers’ championship is concerned. But Austin served up another encouraging indication of F1’s growing popularity in the USA. And, for Red Bull, the satisfaction of a job well done – which their late founder would surely have appreciated. 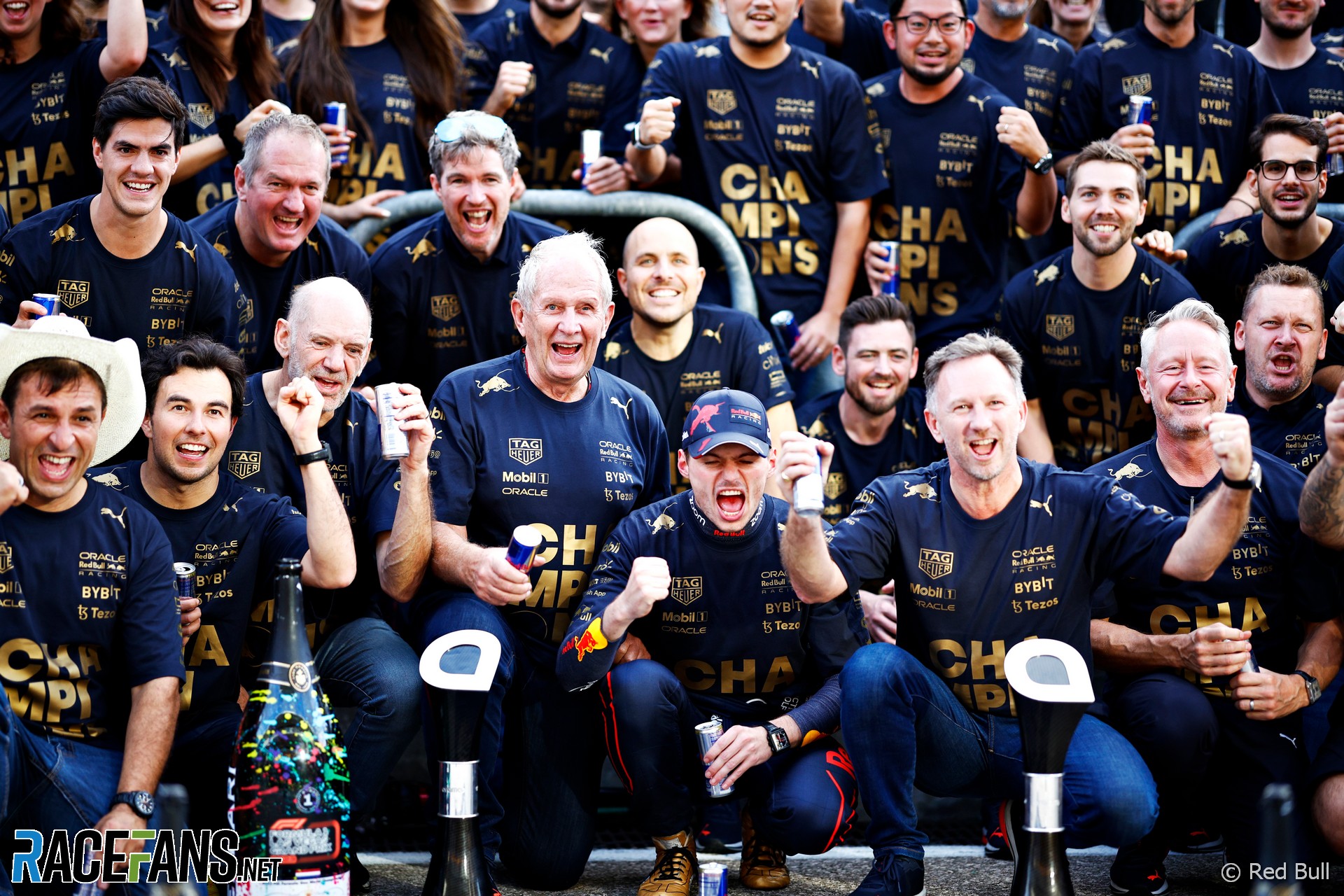 How to repack a sealed muffler | Articles

Have Mercedes missed their best chance of a win in F1 2022?

Have Mercedes missed their best chance of a win in F1 2022?