The early 2000s were tumultuous years for GM. Most of the company’s brands were in disarray, and buyers were deserting by the thousands. The Camaro and Firebird were dead, SUVs and trucks ruled the product mix, and car line innovation was sorely lacking. GM leadership had to do something, or continue to fall behind Toyota in the American sales race.

GM had recently brought in head product guy Bob Lutz to invigorate the company’s numerous brands. One of the keys to more sales was more engaging products, and Lutz set out to streamline the number of nameplates and models so that more development money could be spent on more profitable segments. One of the company’s first moves was to put Oldsmobile out to pasture.

Cadillac was the first to benefit from this strategy with the launch of the successful rear-wheel-drive CTS, reversing a trend toward front-drive products in every other division. Pontiac was slated to become an enthusiast division, with new rear-drive replacements for aging products and more fun-to-drive products in general. Results included the Holden-built GTO, along with a number of concepts displayed at auto shows to judge consumer reactions.

The Solstice concept was one of the best-received, shown first in 2002. It was a convertible two-seater that was more than a little reminiscent of the Mazda Miata, with small exterior dimensions, a four-cylinder engine, and a rear-wheel-drive powertrain. It had a more aggressive wheel-and-tire package than the Japanese offering–as well as less refined styling. The interior looked great, and the whole package was appealing on paper.

All the key design features from the concept carried over into the 2004 unveiling of the production Solstice. The car was built on an all-new compact rear platform, dubbed Kappa, but relied heavily on parts borrowed from other GM vehicles to control costs. The Cadillac CTS donated a differential and automatic transmission, while other bits came from the Hummer H3, Chevy Colorado, Cadillac XTS and Cobalt/G5. Even the GMC Envoy, Opel Corsa and Fiat Barchetta were parts donors according to GM, giving the Solstice backup lights, seat frames and sideview mirrors, respectively.

Looking past all the cost cutting, including the rather heavy-handed use of hard interior plastics and “leatherette,” the Kappa platform was more akin to the Corvette than anything else. It was clear where engineers spent the most time and money. The chassis featured a rigid backbone frame, with a deep tunnel and hydroformed frame rails that GM claimed gave it rigidity without depending on a roof structure for strength. All four corners featured a short-long-arms suspension with unique control arms and uprights. It even had the distinction of being the first GM vehicle with adjustable rear caster.

A fraternal twin was shown shortly after the launch of the Solstice on the 2006 auto show circuit. This was the Saturn Sky roadster–basically the same car as the Solstice, but with a different front and rear fascia and a slightly different interior. The Sky shared its appearance with two other variants of the car–the only-in-Korea Daewoo G2X and the European-market Opel GT.

The Sky and Solstice shared a common engine: a 2.4-liter, 173-horsepower LE5 variant of the GM Ecotec similar to the one used in the Cobalt and various other GM vehicles at the time. It was backed by either a five-speed manual Aisin transmission or a five-speed automatic. The standard differential was an open unit, though a limited-slip differential was available separately or as part of the Pontiac’s “Club Sport” package, which also included four-wheel ABS and different suspension tuning. 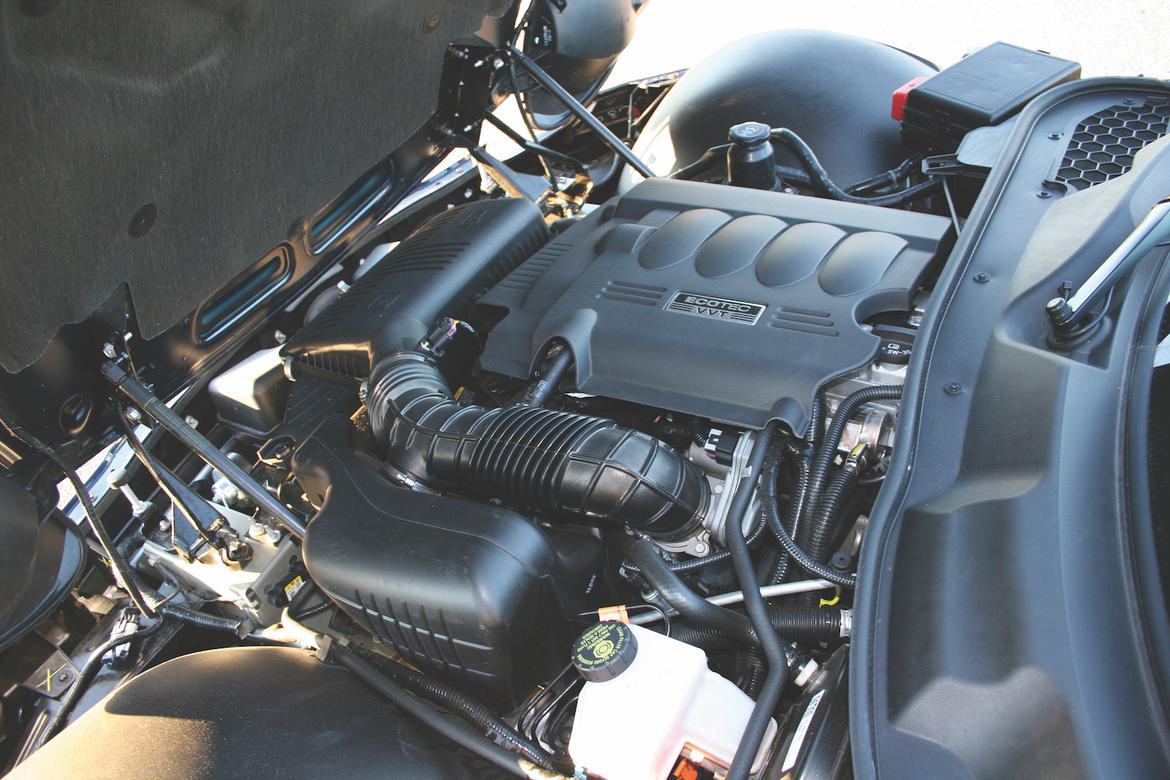 True to its sports car roots, the base Solstice had few standard features. Air conditioning; power windows, mirrors and door locks; and remote entry were all optional, as were a four-wheel ABS and improved sound deadening. The Saturn-branded Sky included most of these as standard, but otherwise it was almost identical in spec. Both cars could be loaded up with OnStar, satellite radio, upgraded audio and chrome wheels if the buyer wanted. Leather seating was a popular choice for both cars.

The Solstice and Sky were twins under the skin, but they had very different looks. The Pontiac was curvaceous and muscular, while the Saturn was razor sharp and edgy. The interiors were no less exciting, with far more design than most GM products in recent memory. Both received very high marks on their styling from reviewers and the public. Without a doubt, they’ll be noted as high points in the GM design language from the period.

From 2007 on, things got more interesting with the addition of a direct-injection, turbocharged 2.0-liter Ecotec-based engine to the Solstice and Sky. The Solstice GXP and Sky Red Line, as they were dubbed, made the ABS, sport suspension tuning and limited-slip differential standard along with the new engine. With 260 horsepower on tap, the turbo twins could rocket to 60 mph in around 5.5 seconds. 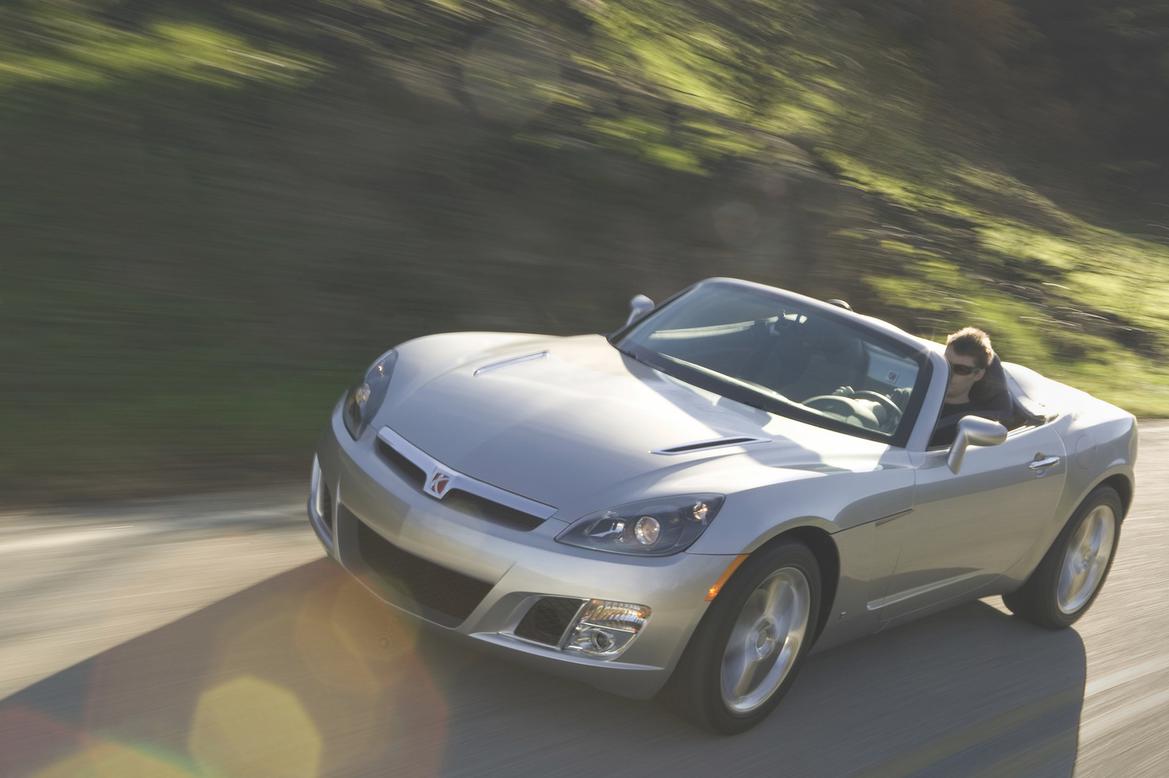 Although the Kappa twins looked great, had some neat specs on paper, and were priced aggressively compared to the Miata and S2000, reviewers compared them unfavorably to their Japanese counterparts. The previously mentioned cost cutting was often cited. The interiors looked great but featured broad swathes of hard plastic and poor ergonomics. The cupholders were behind the driver’s elbow or down near the passenger’s left knee, for example.

Another oft-mentioned problem was a top that required several steps to fold in; meanwhile, competitors had tops that folded simply or automatically. The top also removed valuable trunk space–so much that even in a market segment known for its miniscule boots, the Solstice/Sky stood out as being impractical. They couldn’t fit more than a few small bags in the back. Golfers had to either play solo or travel with the top up.

But by far the biggest complaint contemporary reviewers had with the GM roadsters was their disengaged steering feel and lax throttle response. While these were meant to be competitors of the Miata, S2000 and Boxster, they weren’t even in the same ballpark in handling and steering precision. The 260-horsepower versions were wonderful in a straight line, but they lacked the finesse needed to control the engine’s powerband.

Another major milestone for the Kappa platform appeared for the 2009 model year: the addition of a targa-top coupe model to the Solstice line. The coupe was even better-looking than the already-handsome convertible, with a functional tail spoiler and different taillights than its chop-top sibling. The interior was more or less the same as the convertible’s, and the engine and equipment choices were identical. Unfortunately, the coupe was very short-lived, as the economic crisis conspired to end the Kappa model cycle early. 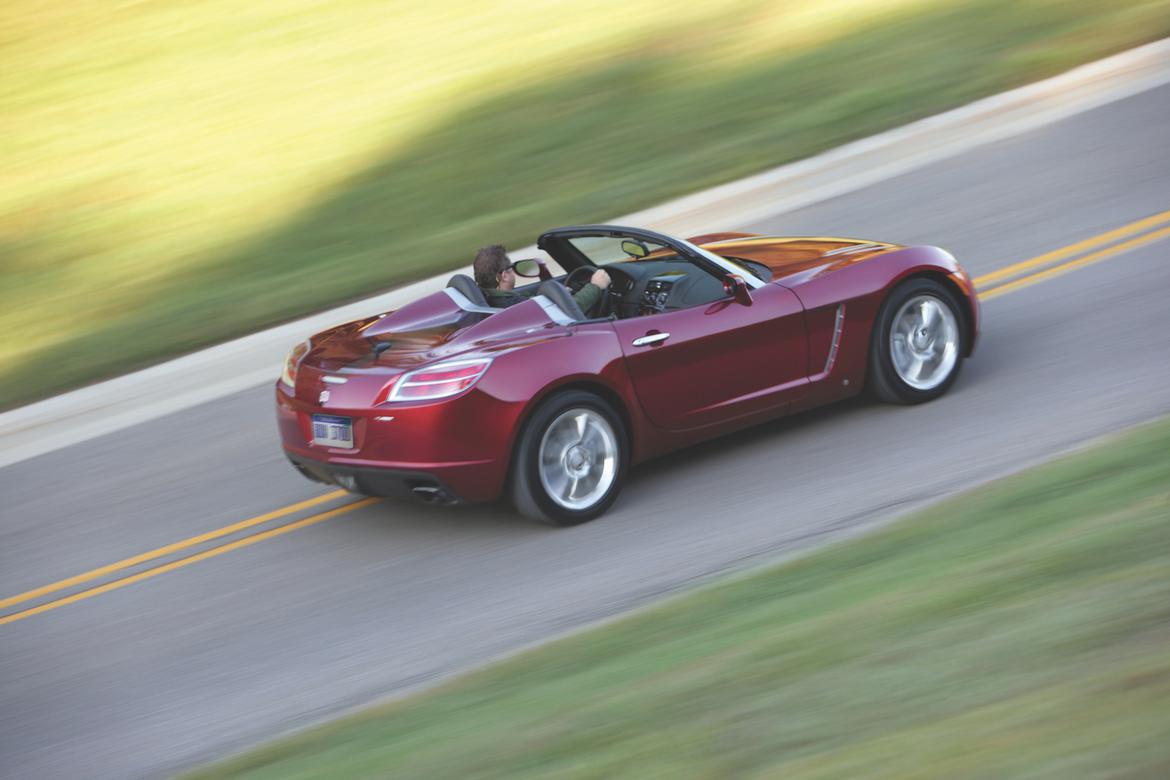 Both cars sold well for a few years, but it wasn’t enough. GM filed for bankruptcy protection early in 2009, setting in motion a series of historic events that would result in the loss of a number of GM brands with overlapping product lines. Unfortunately, Pontiac and Saturn were on the “do not resuscitate” list.

For a short period, it looked like the cars might live on under a different GM nameplate. Alas, there was no room for small, fun cars in the New GM lineup. It was a shame, too, because the little car could have been a contender with just a little more investment and another model cycle or two.

Solstice and Sky roadsters have depreciated to the point that there is not much price difference between the different models. Mileage and overall condition will have a larger impact on price than model year. GXP/Red Line models command a premium, and most owners agree that the cars should have shipped in this trim from the beginning.

These are not especially common cars. According to GM numbers, around 34,000 Saturn Sky convertibles, 64,000 Solstice convertibles and 1200 Solstice Coupes were produced.

The only car most GRM readers should consider is a GXP/Red Line with a manual transmission and a limited-slip differential, which narrows the field somewhat. The Saturn has more standard equipment but will be harder to find. If you want a Coupe, prepare to do some serious searching. Of the 1200 or so Coupes produced in 2009, the majority (781 according to GM) were GXPs; however, only 226 were delivered with the manual transmission. These are the most desirable of all the Kappa variants and have attracted some collector interest. Time will tell if this will be a repeat of the Turbo Corvair or of the Shelby Cobra.

The Kappa platform actually managed to live on as a V8-powered hotrod produced in Spain. A miniscule supercar manufacturer called Tauro bought the Kappa tooling from GM in 2012 and designed a new Corvette-powered supercar around a face-lifted version of the chassis. 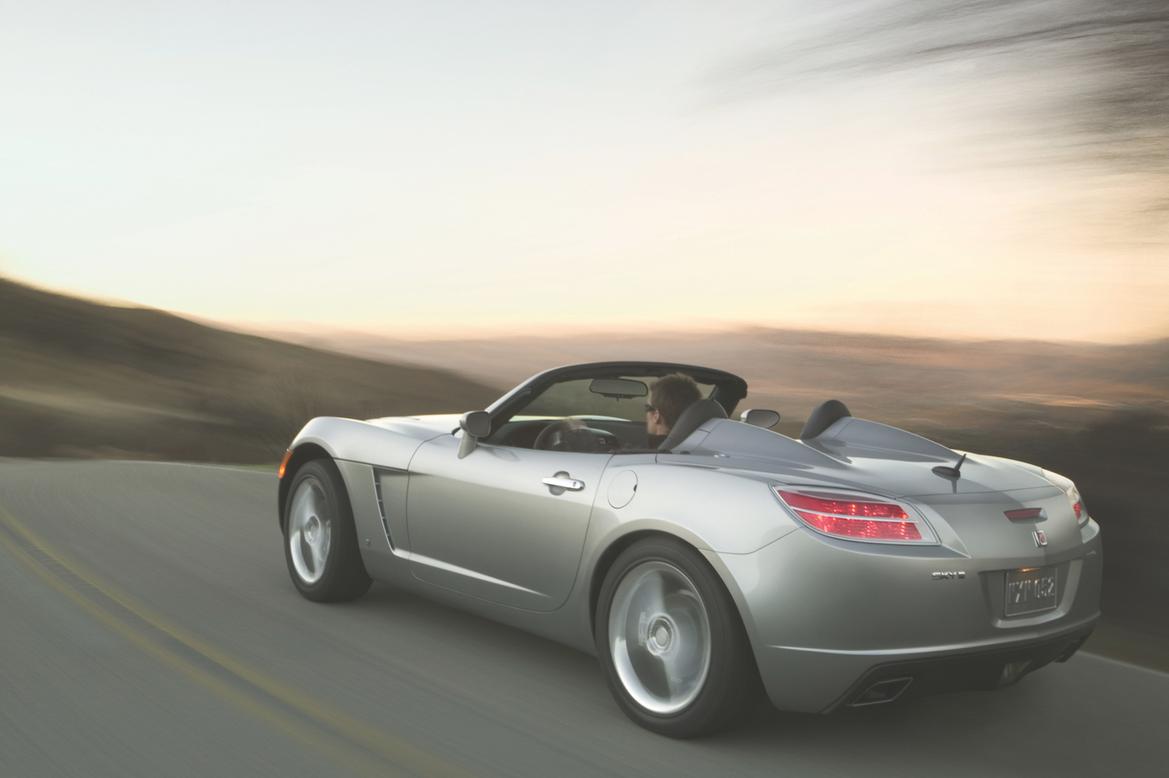 Several TSBs were issued for differential leaks, so most of these cars have been treated for this problem. Differential failures are also a common issue.

The basic Kappa suspension and chassis are great starting points for a competition car. The geometry contains few compromises, and there is plenty of room for more tire and a larger engine. Rhys Millen and Gardella Racing both fielded Solstice drift cars, and the model was successful in T2 and SSB while it was in production.

Driveline clunks are a common complaint with these cars.

The body panels can be fiddly to get right after an accident, so look carefully for misaligned panel edges, inconsistent gaps and other problems.

Attempting to shut the trunk with the top partially down can result in a tweaked lid, another common issue that can be addressed by a determined owner or a good body shop. Convertible top problems (leaks, poor fitment and difficult movement) are often reported as well.

Coupes are generally no different from Solstice convertibles. However, there is no place in the car to store the top, so you’ll need extra garage space if you want one with a roof.

The Ecotec engine in the base Solstice/Sky is no powerhouse, but it provides reasonable fuel economy. Supercharger kits are available to boost power from the factory 140 wheel horsepower to around 220–about the same as a stock Red Line/GXP. This isn’t a bad deal, but starting with a turbo 2.0-liter engine will leave more room for further power increases.

GM Performance Parts offers a kit for the LNF turbo engine that boosts power to 290 horsepower and torque to 340 ft.-lbs. with nothing more than a couple MAP sensors and an ECU reflash. The kit may provide only a modest horsepower gain, but it includes a full family warranty and can even be installed by a dealer.

If that’s not enough for you, V8 swaps began as soon as the Solstice/Sky twins landed on dealers’ lots. Several companies offer the parts to do the conversion, and while it’s straightforward, it’s far from a bolt-in swap. Any of the recent LS-series V8s can be swapped into the Solstice/Sky. For a period during the cars’ production, a company called Mallet marketed LS-powered Solstice roadsters through GM with full factory warranties. Mallet still performs the conversion on customer cars as needed.

As the cars have aged, their weak points have mostly concerned the budget-priced interior parts. Rattles, scratches and broken clips are frequent annoyances mentioned on the message boards.

Toto Wolff praises Nyck de Vries: ‘No one could have done a better job than him’ | F1