Endurance racing & stock cars: Do they have anything in common? | Articles

What does endurance and oval-track racing have in common? More than you realize. And both can learn something from each other.

Prior to joining Grassroots Motorsports earlier this year, I had been intimately involved in oval-track racing for more than two decades. A little more than a week ago, I covered my first full endurance racing event–the Lucky Dog Racing League event at Carolina Motorsports Park.

As the races went on, I experienced several instances of déjà vu. The world of long-distance road racing certainly has a lot in common with the short tracks I cut my teeth at.

To finish first, you must first finish.

Cliché? Very much so.

Contact is inevitable. Oval-track car builders construct their cars to last. But, how is that any different for endurance racers?

While road racing discourages contact, two 7-hour races test the durability of a machine. Instead of a fellow competitor rattling a car, the constant braking, accelerating, cornering, and maybe the riding a curb or two do it instead.

Unlike stock cars, which often hardly have anything stock, many of the cars at the Lucky Dog event were relatively true to their showroom roots. It impresses me that they go the distance. The parts on these cars weren’t designed for racing–they were designed for fetching groceries. However, several teams had their weekends come to a close early when parts failed.

Things need to stay cool, lubed and, most importantly, together. That applies whether you’re going seven hours on a 2-plus-mile road course or 100 laps on an oval less than a half-mile. 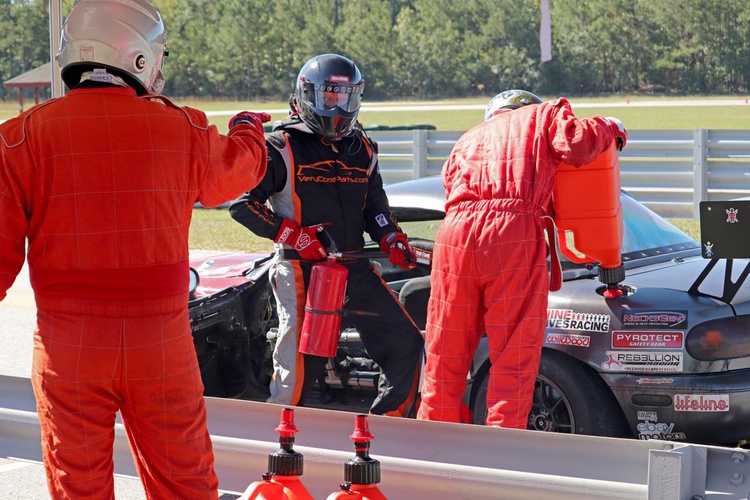 The Lucky Dog Racing League required teams at CMP to stay in their pit for seven minutes for a fuel stop. Surprisingly, seven minutes go fairly quickly. Within that span, you start asking questions.

How’s the setup for refueling?

Is the next driver ready to hop in once fueling finishes?

Are necessary spare parts, tires and tools in the stall? Are they organized so you can quickly grab them in a scramble to make a repair or setup adjustment?

Surprisingly, I saw very few “war wagons.” While popular in NASCAR, you also find them at many Saturday-night short tracks. These pit boxes carry everything a team needs to make fast repairs. They do not need to be NASCAR fancy, but a well-organized toolbox can cut valuable time in the pits so a racer can spend more time logging laps and gaining positions. That’s no different for an oval-tracker or an endurance racer. 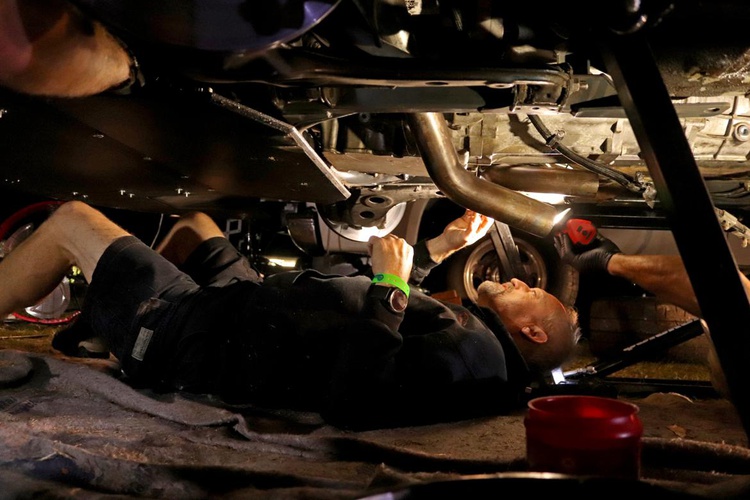 If you’re going to be successful in anything, you got to love the grind. Behind every minute of glory are hours of hard work. A great representation of that came between Saturday’s and Sunday’s races. Several teams thrashed throughout the evening and in the dark to fix their cars.

I love that never-quit attitude.

Is it determination or being delusional?

Well, it depends on your perspective.

Either way, an example of that spirit came with our V6-powered Miata endurance racer. Our Saturday ended when the car lost the ability to transfer power to the wheels. Immediately, the team went to work.

The long, frustrating operation of taking out the transmission to remove a suspected failed clutch resulted in finding that it was perfectly okay.

Instead, in the back we found an axle had been stripped.

Game over for the weekend.

Nevertheless, it wasn’t for naught.

The team may have spent hours to finally determine the root of the problem, but we could still smile.

We enjoyed our time together and making new friends at the track.

And, we reminded ourselves we really want to race.

That’s the racer spirit, and that transcends whatever discipline you compete in, whether it’s on an oval or on a road course.

Really cool to have this sort of insight into both worlds, especially since I’m not well-versed in the world of circle-track racing.

Well a friend of mine who came from dirt racing and racing dirt late models here in Edmonton and now works in Toronto for a big car club just won a lucky dog endurance race this past weekend in calabogie.

Title win in Japan would be ‘extra special’ – Verstappen