[Editor’s Note: This article originally appeared in the October 2010 issue of Grassroots Motorsports, back when the S197-chassis Mustang was still on sale.]

The Ford Mustang was looking pretty tired by 2004. Sure, it had some interesting visual cues, but overall it lacked the distinctiveness many Mustang enthusiasts thought it should have. The car’s performance was also starting to suffer in comparison to its competitors, mostly imports like the reborn Nissan Z-car.

In short, the Mustang was showing the strain of being Ford’s sports flagship. After all, the car had gone largely unchanged for a decade. Buyers agreed that the old Mustang had lost its edge, and they stayed away in large numbers as it petered out into anonymity.

The 1995-2004 Mustang—known by its SN95 chassis code—had its moments. Check out the various Cobra and Cobra R models for examples of just how fast, attractive and downright aggressive one could be. Of course, that vibrance didn’t last.

It didn’t help that the cool automotive vibe in 2004 was straight-up retro: The PT Cruiser, Chrysler 300C and various throwback products—including Ford’s own Thunderbird—proved that nostalgia sells. Every concept, particularly from the Big Three, reflected the styling values of an earlier time, when consumers were younger and the American car was dominant. A backward-looking Mustang would probably do very well, and Ford knew it.

Project leader Hau Thai-Tang hit the styling ball out of the park with an all-new Mustang that was almost universally praised. It seemed familiar and fresh at the same time. The overall look was straight out of the 1960s, featuring creased flanks plus a nose and tail that recalled the car’s glory days.

Everything on the new S197-chassis Mustang was almost directly related to the model’s heyday, and it struck a chord with the media and the public. Despite the period cues, the car managed to look modern, sleek and muscular.

The retro theme continued inside the cockpit, with a slab-front instrument panel, squared-off center console and three-spoke silver steering wheel. Like the exterior styling, the interior was retro without compromising functionality. The ergonomics were totally modern, with high door panels and comfortable seats.

The performance was not, thankfully, rooted in the Vietnam War era. Ford offered a choice between two powerplants. 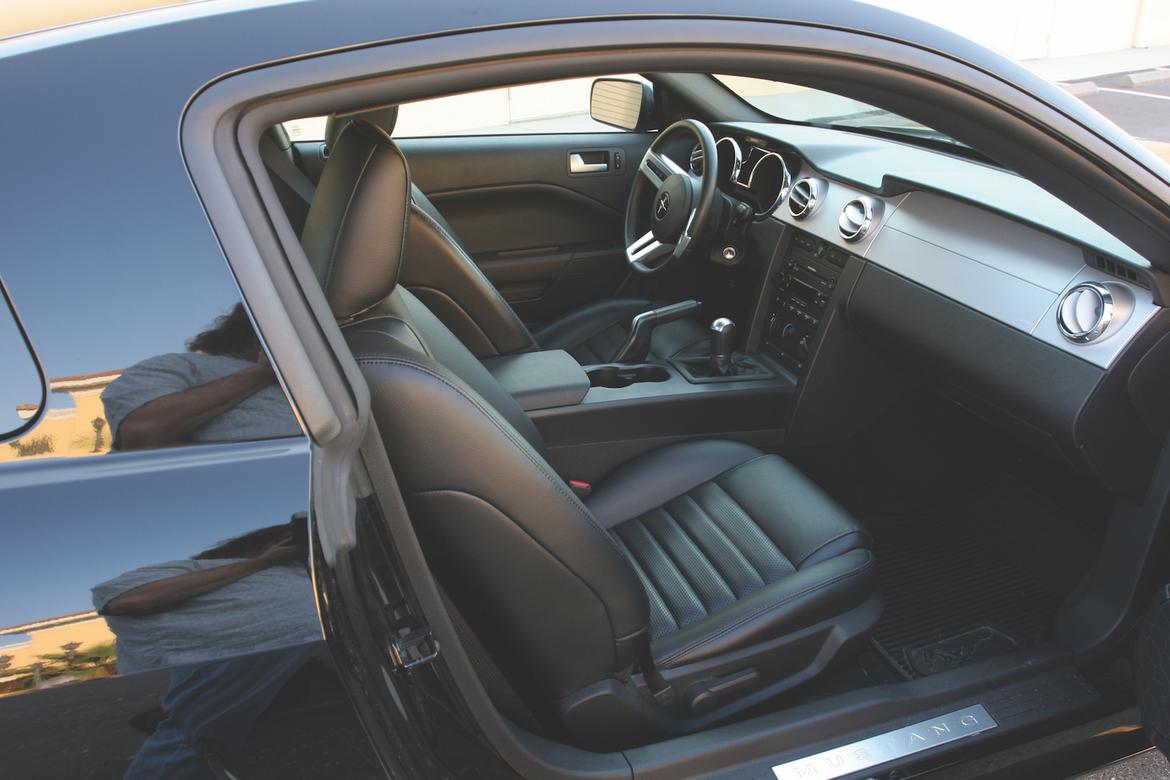 The base engine was a new modular 4.0-liter SOHC V6 that replaced the previous 3.8-liter pushrod V6. This engine was no slouch, producing 210 horsepower—on par with the 5.0-liter V8 found in the old Fox-bodied Mustang.

Backing the shiny new V6 was a familiar old friend: the T-5 manual transmission. Love it or hate it, the five-speed unit was a big improvement over previous versions of the same gearbox. Most buyers picked the five-speed automatic transmission, however.

The base powertrain was good for sub-7-second zero-to-60 times, plenty fast enough for most buyers. The real news for Mustang enthusiasts, however, was the new GT.

The base GT received a 300-horsepower, 4.6-liter modular V8. It featured three valves per cylinder where the previous Mustang GT used two-valve heads. The block was aluminum, and the engine featured variable valve timing along with other technological extras. Behind the V8 engine was either the five-speed automatic transmission or the Tremec 3650, a five-speed manual box. Either combination could rocket the snazzy-looking coupe to a low-5-second zero-to-60 time. 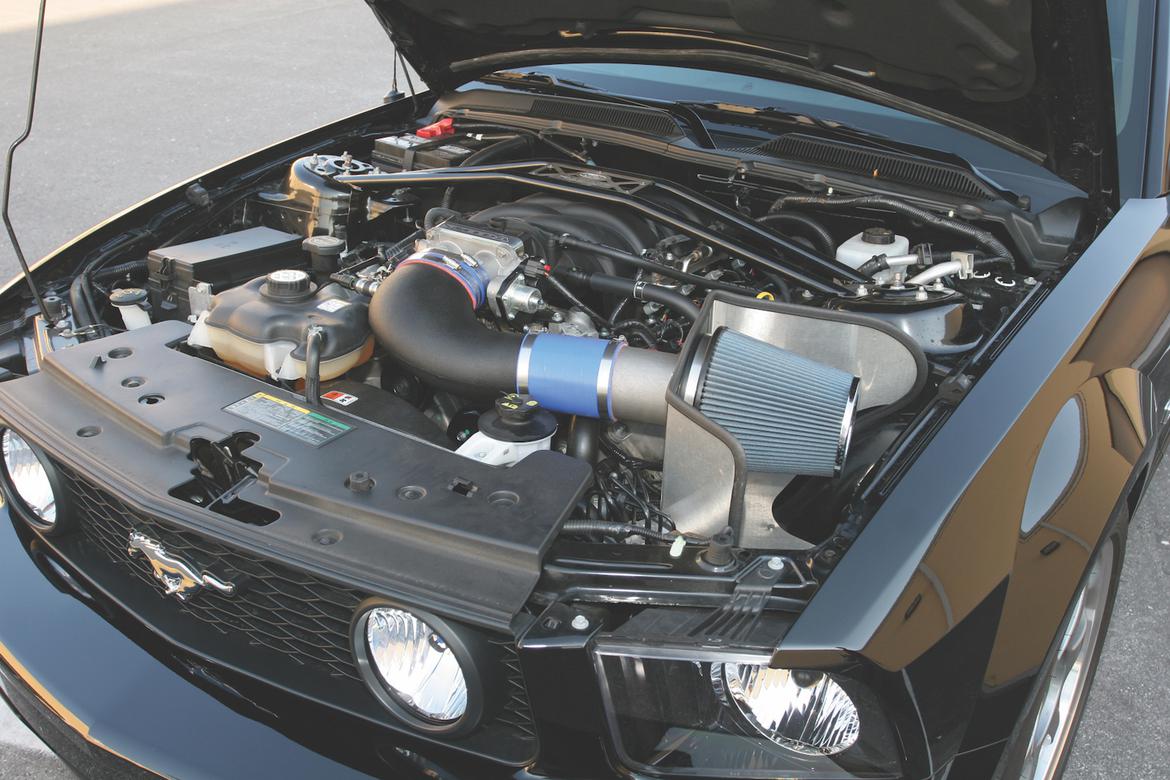 The car’s foundation also featured some updates. An all-new chassis with plenty of torsional rigidity helped Ford engineers squeeze some pretty stunning road holding from a suspension that wasn’t particularly glamorous on paper. The front continued the long-standing Mustang tradition of MacPherson struts, this time with stiffer lower control arms. Out back, the car used a solid axle supported by coil springs, a central torque link, two control arms, and a tubular steel Panhard rod.

The GT came with anti-roll bars on both ends, and the V6 made do with a single, smaller bar on the front. The V6 Mustang came with standard 16-inch wheels, while the GT was shipped with 17s. As with most modern cars, the brakes were robust: either 11.5- or 12.4-inch rotors plus beefy aluminum calipers up front.

Contemporary reviewers loved the car, dubbing it a worthy successor to the Mustang name. They praised the power, brakes and comfort—even the handling got the thumbs-up despite the use of a solid rear axle.

The base V6-powered car was lauded for its low price, high level of standard equipment, and surprising performance. The V8-powered GT was the media darling, of course. Thanks to its base price of about $25,000, it was a performance steal.

There were a few complaints, though. Not everyone cared for the fuel economy or the downmarket materials Ford used to muzzle prices. Some reviewers noted the side effects of a solid rear axle, but most were still surprised by the handling extracted from the same rudimentary suspension.

The new Mustang was immediately seized by the aftermarket—with a little help from Ford marketing execs. They realized the importance of the aftermaket, making preproduction vehicles, engineering drawings and critical specifications available to the larger tuners before the car even hit showrooms.

Ford’s own tuning arm, Ford Performance, played a pivotal role, supplying race parts large and small. A “body in white” program was even instituted to supply race teams with the raw material needed to create their own track machines.

Ford Performance went one step further, creating a turnkey racer—the FR500C—for teams looking to run in Grand-Am Cup. The FR500C was powered by Ford’s crate race engine, an overbored version of the 4.6-liter V8 known as the 5.0 Cammer; the moniker was a sort of mishmash of historical engine names. A spec T-56 transmission, Brembo brakes and suspension package rounded out the FR500C. All of the parts were also available separately for do-it-yourself types.

So, how does all of this help today’s bargain shopper? The Mustang hasn’t been immune to depreciation, making used examples an even better deal.

Ford has built a ton of Mustang GTs since the car’s 2005 release. The market is more or less flooded with these sharp-looking, V8-powered coupes, and the aftermarket is still going strong. 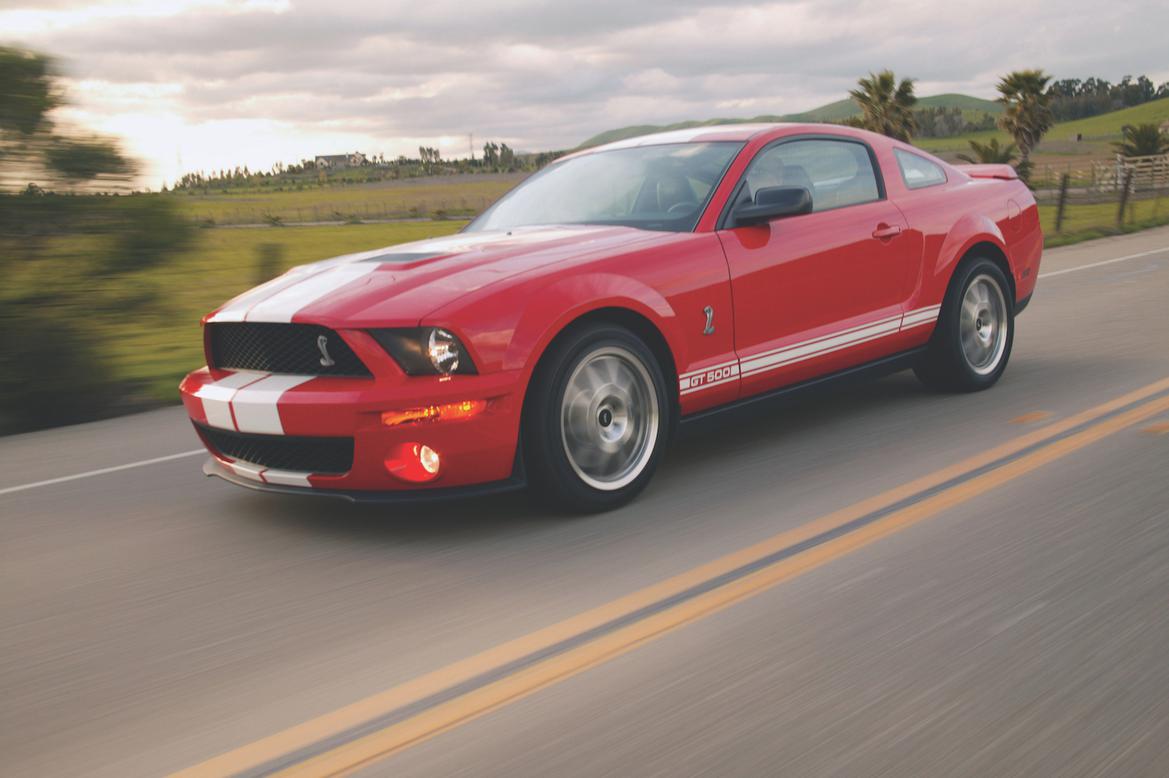 Ford’s 4.6-liter Modular V8, standard issue in the Mustang GT, had most of its bugs exterminated long ago.

These engines have had some problems with the spark plug threads, and difficult access means extra hassle.

The coil packs are known to go bad, but the later ones seem to be more durable. At least they’re inexpensive and easy to replace.

Most owners seem happy with a little more than 300 horsepower to the wheels, and that’s easily reached with a cold-air intake, headers, a sportier exhaust, and a custom tune. The resulting car is quick, reliable, comfortable and easy to drive.

Looking for closer to 400 horsepower—or more? Then start shopping the available turbo and supercharger kits.

Ford issued some minor technical service bulletins for the early S197 Mustang regarding creaking and clunking in the front suspension. Most are minor and, realistically, you’re probably going to replace most of that stuff anyway.

The S197 Mustang seems to have fewer aftermarket suspension options than the earlier Fox-bodied cars, but that’s probably because there are fewer things to reengineer. The chassis is nice and stiff, and the suspension doesn’t have to be bone-jarring to do a good job of keeping the tires where you want them.

Much like a late-model BMW, the S197 Mustang experiences some suspension geometry problems when lowered. Fortunately, a front roll center relocation kit is a simple fix.

Ford Performance as well as all of the popular tuners—Steeda, Koni, etc.—offer upgraded suspension parts for the latest Mustang.

Some owners have noted that squeaks and rattles come with age.

The interior plastic can seem a little substandard, although it has proved very scratch-resistant and cleans up nicely.

There was an airbag recall due to noncompliant airbags.

My ’06 is only a V6 but it may be a ‘forever’ car. Very little I don’t like about it and lots I do. Used car bargain, strong aftermarket and looks that will never be dated.

My ’06 is only a V6 but it may be a ‘forever’ car. Very little I don’t like about it and lots I do. Used car bargain, strong aftermarket and looks that will never be dated.

One of the (many) cars I’m looking at these days. I would think the V6 would help offset the porkiness of the S197 a bit. Plus I don’t really need 1000 HP to drive a nice handling car on the street.

I know this article is about early s197s but…

I will let you guys in on a little secret.

The V6 from 11-17, the 3.7L cyclone makes about 275 HP at the wheels and many people are still developing the platform even though the engine is dead.

Over the years these people have discovered that the 3.7L may have been a test bed for the coming Ecoboost engines and because of that they love BIG turbos. Don’t make the mistake of trying to add a small turbo like the ones on the 3.5. it won’t work. But there are 2 companies Auto Mafia Racing and Ortiz Performance selling plug and play big turbo kits.

These kits can safely get you 600-650hp all day on a sealed engine.

Many people are pushing more. And guess what… They don’t care because there are literally 100s of these engines lying around and you can find them all day for $500.

So for $500 you can have a car that is faster and cheaper than almost everything on the road. I always recommend a 3.7 for any swap you want to do. It’s hard to pass up.

Other fun facts about s197s.

The V6 comes with a 2 piece driveshaft that needs upgraded immediately following any mod. People have been killed because of this crap design. Check YouTube there are videos.

S197 chassis are so stiff, a strut tower bar is no longer needed. Racers leave them in each other’s garages as a joke. My car came with one stock (V6 performance package) and I have removed it to save weight.

The stock airbox was designed by Roush. All aftermarket “cold air” intakes lose power. A couple have a net loss of 0, but most lose power.

Don’t waste money trying to build an N/A 3.7. The only mods that add power are ported intakes and exhaust. Everything else is pointless. The car comes with 275 HP and maxes out at 300 HP full bolt on.

If you drive a 3.7 and it feels slow it’s because most of them come with 2.73 gears designed for fuel economy. Add some 3.31 for boost and drag racing. (It eliminates the final shift before the lights.) Or 3.55 if you want the little extra performance and don’t mind the extra shift through the lights.

The only problem I have with the 3.7 is it comes in a less attractive package. The original 2005 body style is just too attractive to me.

Stan, I test drove a 4.0 model before making my ultimate purchase decision. It’s perfectly spunky enough for daily use and I never really want for more power. One added benefit is there is no motivation to ‘mod’ the car. I’ve saved a ton of money on ‘enhancements’ because it will only ever be a V6.

Other than the ridiculously foolish plastic thermostat housing, I’ve not had to repair anything on it.

Ideally I would like the 3.7 in a 2005 body style as I agree, the later style just doesn’t look as good -imo. Are there any differences in the Mustang 4.0 and other models (Ranger, etc)?

Ricciardo hasn’t given up on 2023 race seat

What’s next for F1 after hitting its 24-race limit with 2023 calendar? · RaceFans

What's next for F1 after hitting its 24-race limit with 2023 calendar? · RaceFans

‘Lucky’ Albon had no knowledge of surgery complications

Russell leads Mercedes 1-2 in FP1 as Verstappen breaks down