How to find the ultimate track car | UTCC 2022 results | Articles

The Tire Rack Ultimate Track Car Challenge offers one of the easiest rule books to follow: Pass a NASA safety inspection. That’s it. No additional caveats. No B.S. Bring a car–any car, really–and set a fast lap. It’s as simple as that.

UTCC typically attracts a wide range of vehicles, with drivers from all walks of life. For example, TV host, stunt driver and professional race car driver Tanner Foust competed with a new Volkswagen Golf R straight off the assembly line.

The field for the 16th annual edition held at Virginia International Raceway featured a wealth of production cars, with varying levels of mods. The Chevrolet Bowtie dominated the paddock, with five Camaros and four Corvettes.

Regardless of marque, entrants had to manage another challenge besides just laying a fast lap: weather. Intermittent rain wreaked havoc on some competitors’ strategies throughout the May weekend.

Nevertheless, one car stood out among the rest. Brian Faessler, a familiar face in the UTCC, took a heavily modded 2015 Ford Mustang to the first spot. He laid down a lap more than 5 seconds quicker than the second-place BMW M3 of Charles Harding.

While many focus on the fastest lap of the competition, other categories within the field highlight its diversity: entries that can top 180 mph, entries wearing license plates, entries that still have that new car smell. For more details on how the field fared in the 2022 Tire Rack Ultimate Track Car Challenge, read on.

Brian and this radical Ford Mustang–which originally rolled out of the factory with a V6 under its hood–are no strangers to the top step of the UTCC podium. In fact, this year Brian became the event’s first-ever triple champion when he took the overall win.

His Mustang still featured a turbocharged, Coyote-based V8 under the hood–the “baseline” power spec was around 650 horsepower, and it only went up from there as he added boost with the cockpit-mounted controller. That engine propelled the car past 180 mph down VIR’s long back straight. The in-car video of him banging through the sequential gears is a sight to behold.

The Mustang received minimal changes from previous years, and Brian’s winning lap in 2020 was only slightly faster than this year’s run. The track conditions in 2022 certainly weren’t ideal, and he admits that his team got a late start with the prep work.

How much of an all-rounder is Brian’s Mustang? His entry form lists the car’s greatest strengths as “corners, and straights.” After hanging nearly 6 seconds on second place this year, we’d say he’s right. 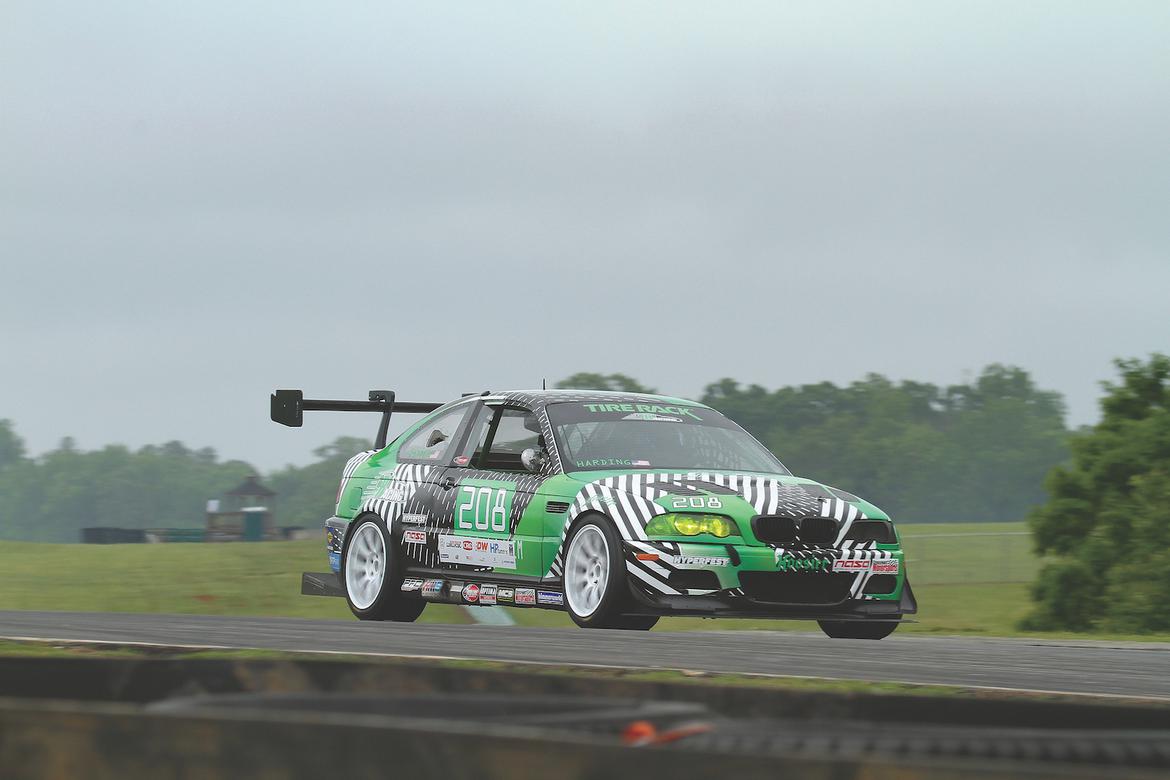 The BMW M3, regardless of generation, is one of the most track-capable canvasses on which to paint a winning package. Charles did just that with an E46-chassis example rapidly approaching its 20th birthday.

His M3, also a regular in BMW CCA road racing, was powered by a stroked S54 putting nearly 400 horsepower to the ground through Hoosier S100 slicks mounted on BimmerWorld TA16 wheels. Öhlins suspension and some custom aero rounded out a well-balanced package that did everything well, including scoring a runner-up spot for Charles’ third UTCC. 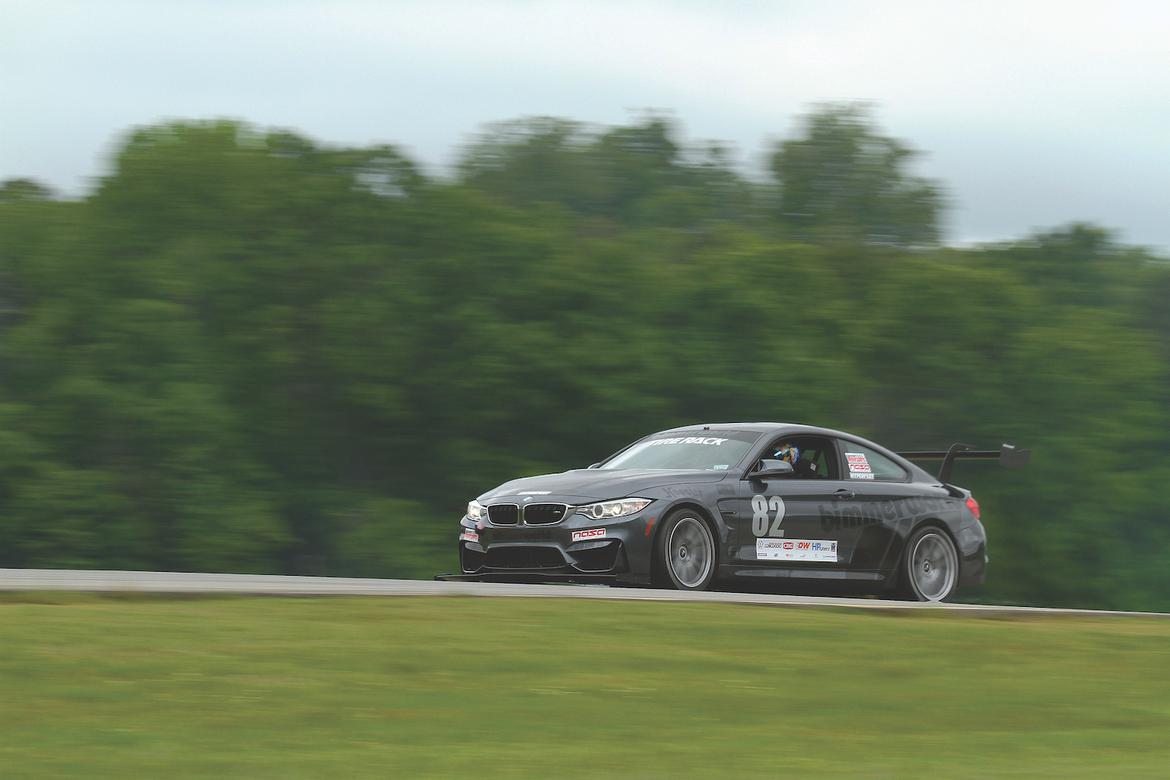 BimmerWorld’s James Clay has run all kinds of cars at VIR: GT3, GT4 and custom-built machines for the likes of IMSA, SRO and Pikes Peak. But for the 2022 UTCC, he brought a car sporting a license plate and a full interior. BimmerWorld’s GTMore M4-based monster is a showcase for the shop’s products–and also a showcase for speed.

With nearly 700 horsepower on tap thanks to upgraded turbos, forged internals and a pinned crankshaft, the GTMore leverages pro racing technology in a package that’s fully street legal.

While the Hoosier slicks were track-only additions for the UTCC, the Alcon brakes and MCS coil-overs were street-capable. And lest you think the GTMore is just a slightly disguised race car, James notes that the car weighed a bit more than 3800 pounds this weekend. Check out our YouTube for more. 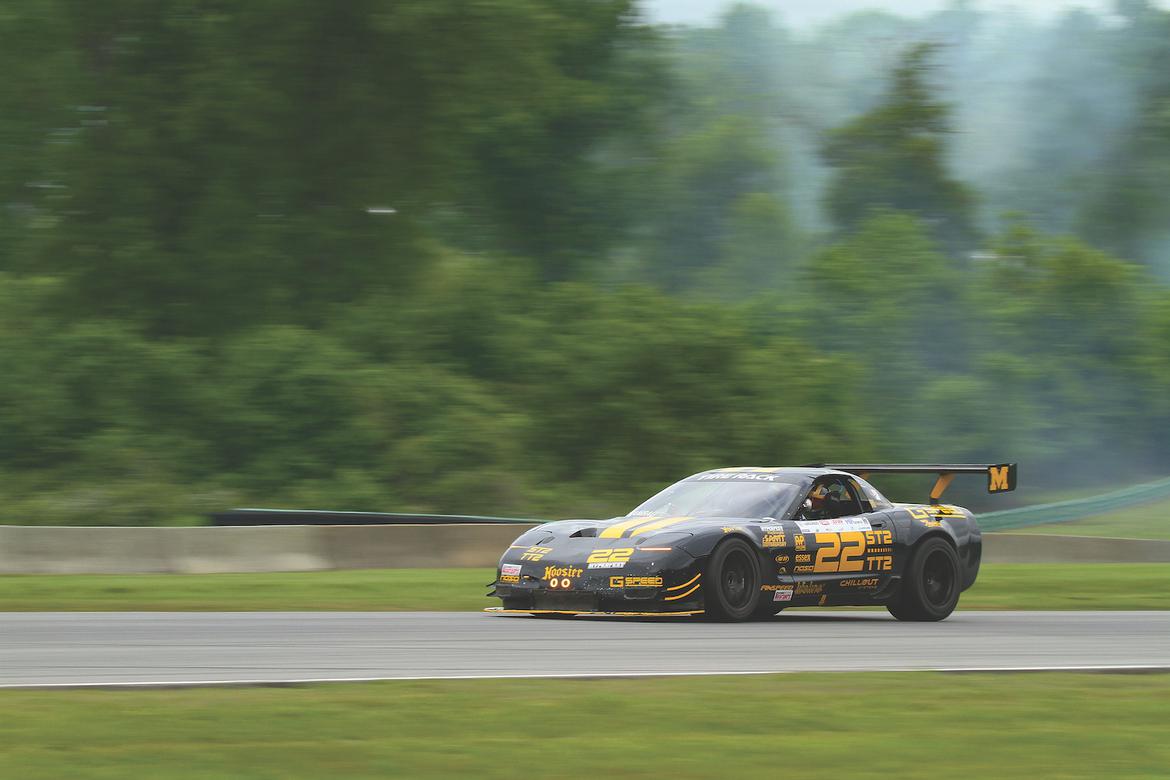 Periodic rain punctuated by humid, hot weather made track conditions less than ideal, but Ben was one of very few drivers to beat their time from last year, en route to his best UTCC finish to date. His 3125-pound C5 is usually slightly detuned for NASA’s TT2 class, but for the UTCC he let all 6.9-liters of stroked LS3 run loose. 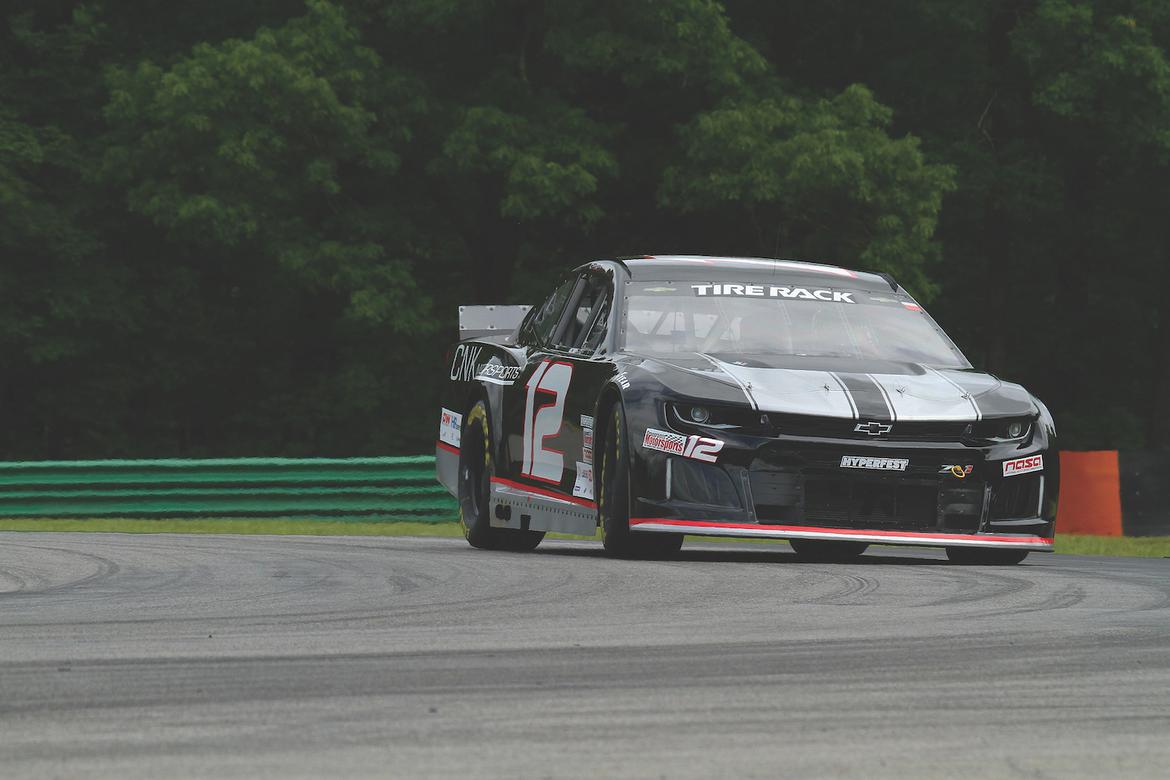 Patrick has logged more than 3000 miles at VIR, mostly in high-horsepower, production-based cars. But this near-700-horsepower NASCAR Cup Series Camaro is pure race machine, and Patrick is finding life in a purpose-built race car to his liking. His Track Attack package Camaro–a track day build from Hendrick using a Cup chassis–is pure NASCAR, down to 27.5×12 slicks mounted on 15-inch wheels along with six-piston AP brakes. 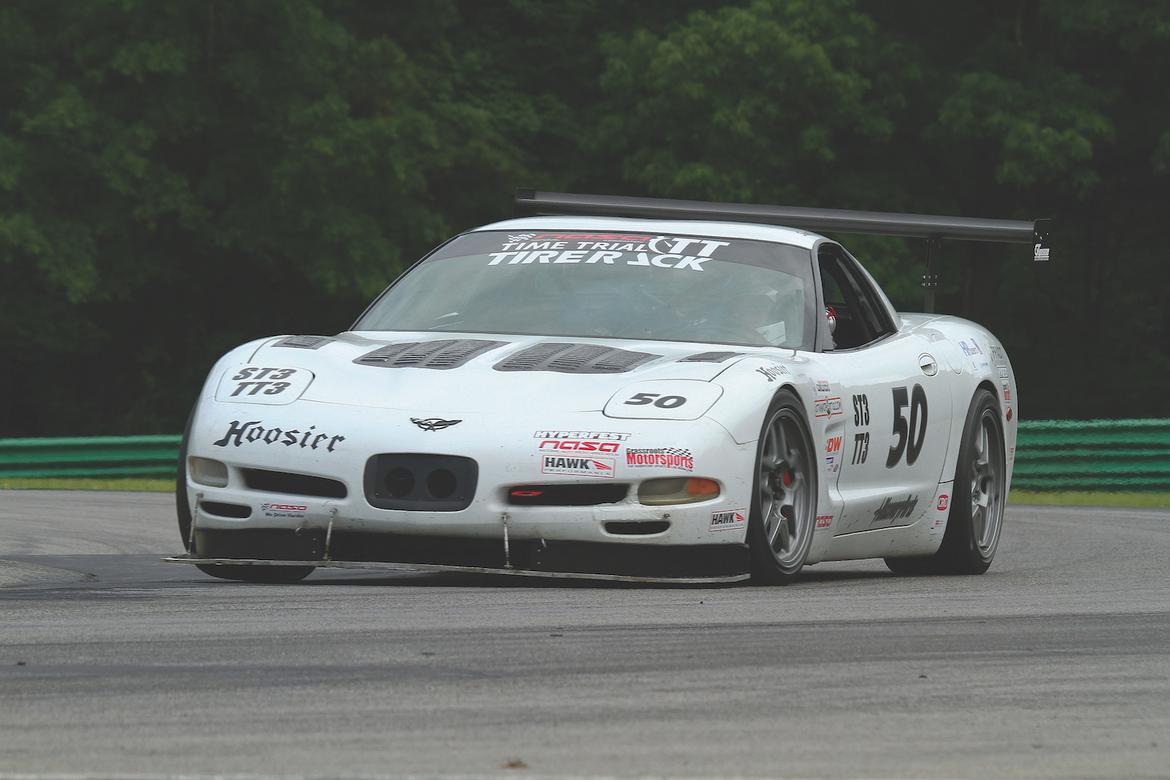 Scott had just bought this Corvette, so prep was minimal: additional fluid cooling and an Accusump to help keep the LS6 lubricated in corners. 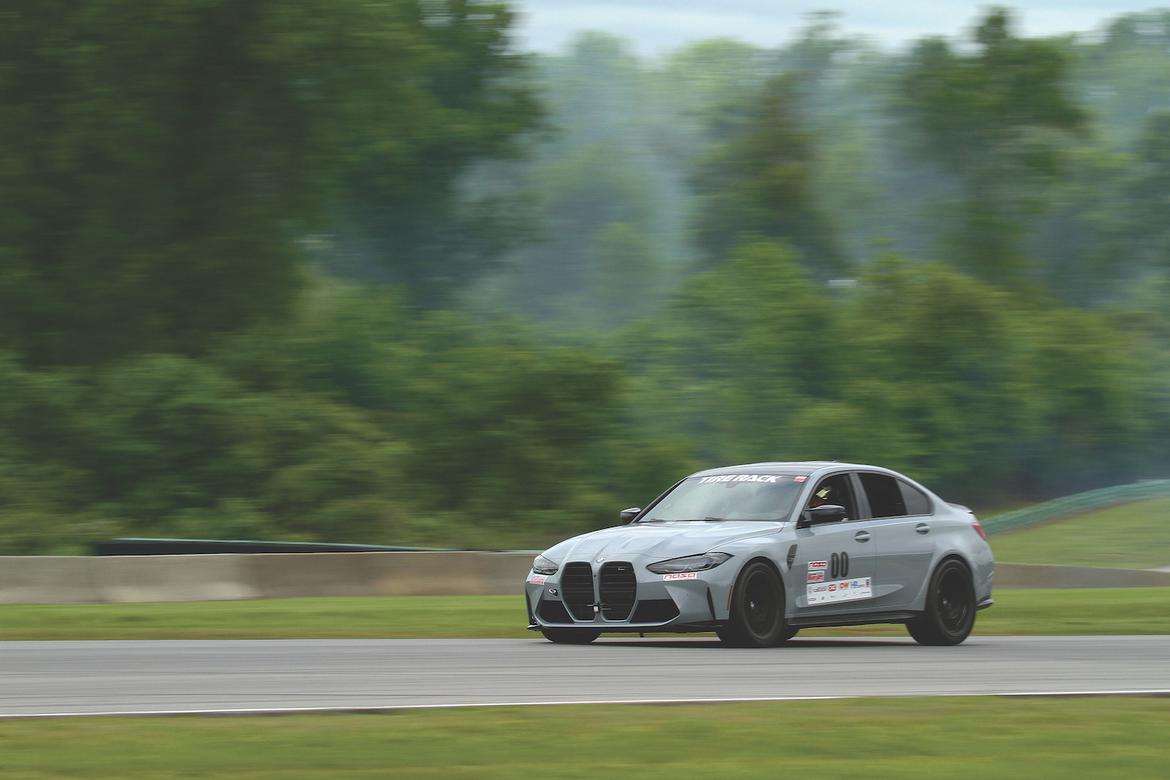 With his Nissan GT-R track car in the shop, Kyle threw some Hoosiers on his street car–a basically stock BMW M3 Competition with a bit of a tune–and stormed into the top10. He also drove it to and from the track. 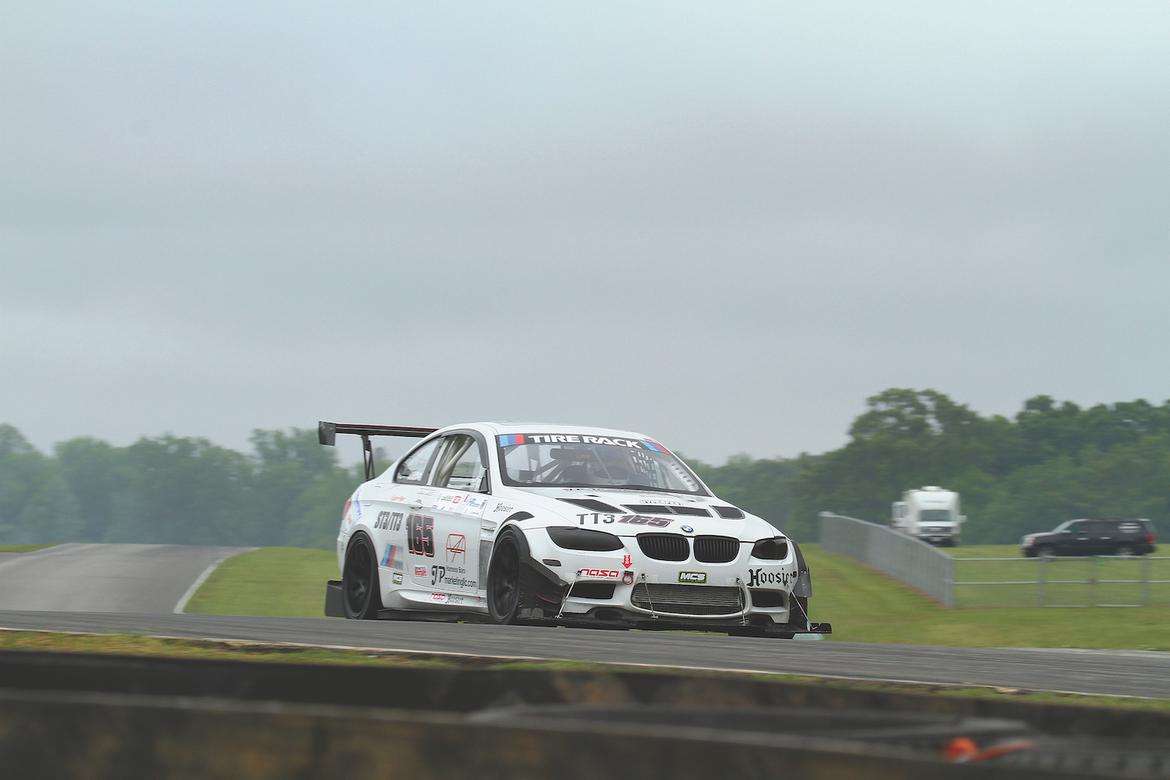 Even though the V8 in Jens’ BMW M3 was detuned slightly to fit into NASA’s TT3 class–354 horsepower for the 3503-pound car–every other system of the car was turned up to 11. MCS coil-overs, StopTech brakes, 315mm Hoosier A7s and adjustable control arms were just the beginning. Lots of this BMW’s speed came from extensive aero work, includ-ing a full flat floor. Jens experienced some electrical issues during the competition but still managed to bring his M3 home in the top 10. 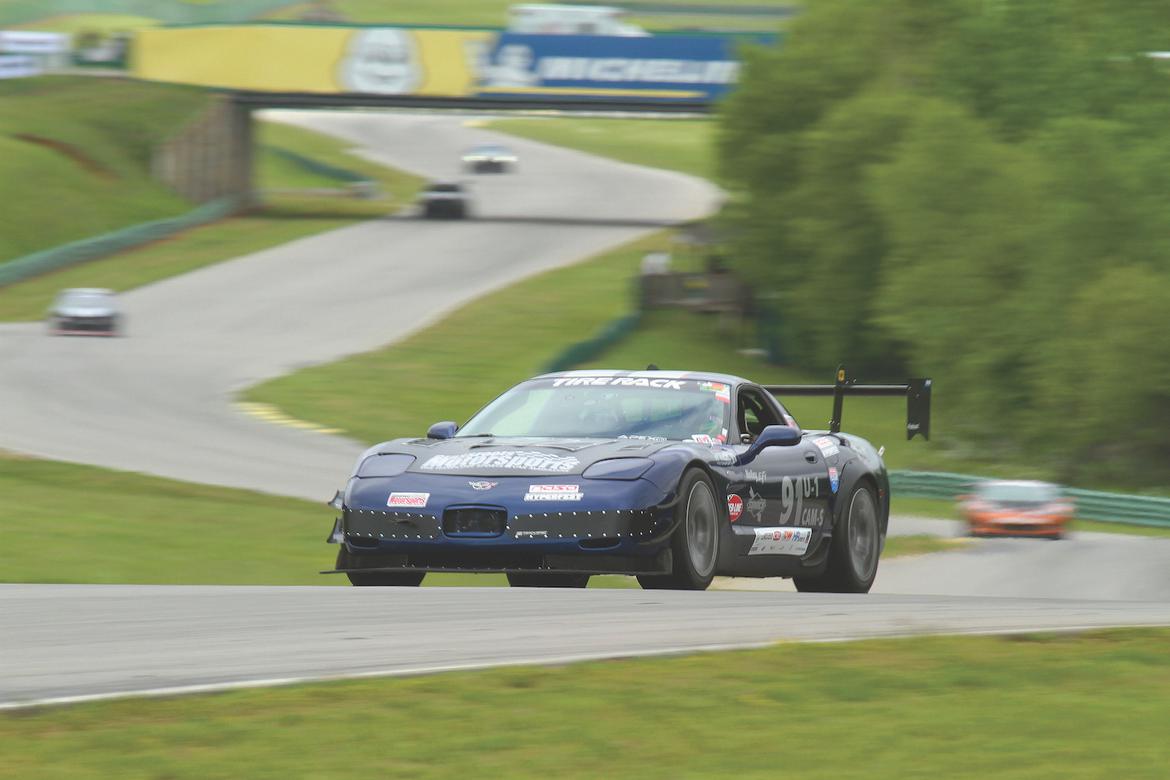 Our own C5 project car, fitted with an LS3 making 460 horsepower at the wheels, made its final major competition stop at the UTCC. We didn’t go 100 percent in a car that was about to go to its new owner, but we also guessed wrong on tires. We had Goodyear Eagle RS-R slicks for dry conditions and 200tw Yokohama AdvanA052 rubber for rain; both tires deliver amazing performance in the right environment, but our amateur meteorology skills failed. Still, it was a fine sendoff for a beloved project: scoring a top 10 in our own premier event. 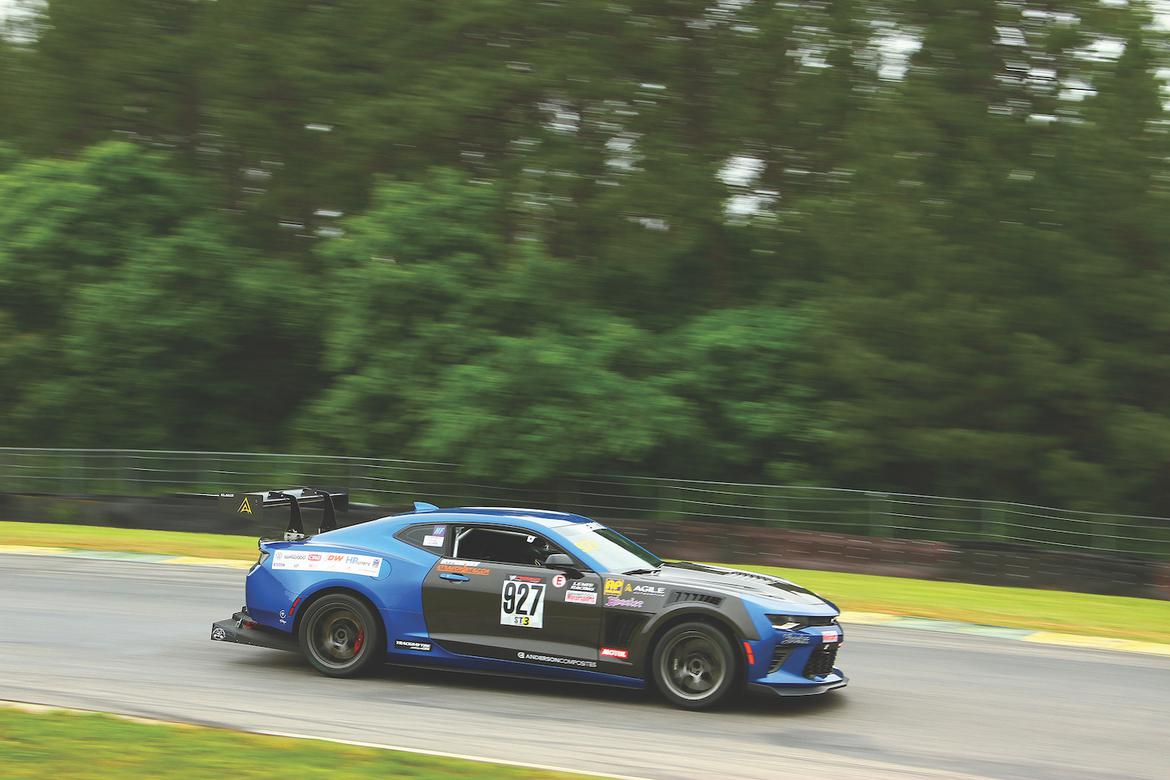 Mechanically, Jeffrey’s Camaro was fairly mild. AP Racing brakes, bolt-on engine mods for the LT1, a factory DSSV conversion and some Hoosier tires made up a simple but effective hard-part package. But the exciting stuff was all the carbon bits: hood, trunk, doors, fenders, wing, undercar diffuser and side skirts. Where a stock Camaro SS weighs 3685 pounds, Jeffrey’s hit the grid at just over 3500 pounds with him aboard. 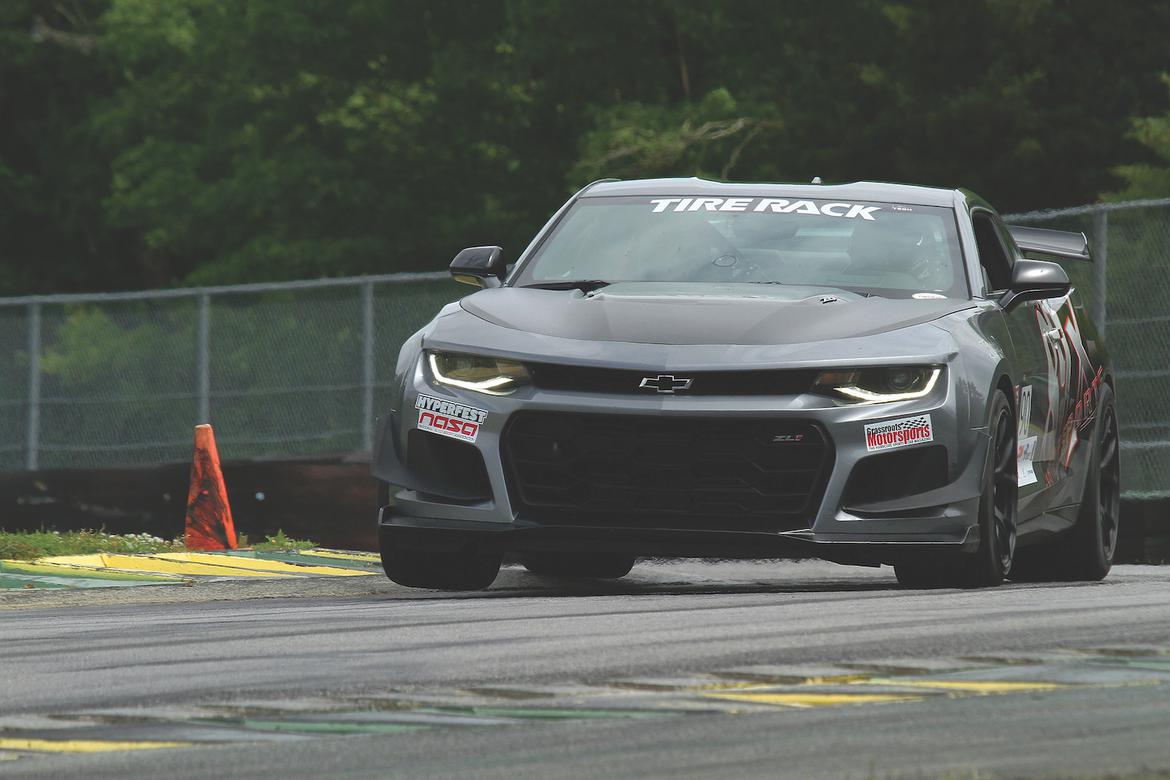 This was Sebastian’s first shot at the UTCC, and he came out swinging with a 650-plus-horsepower Camaro that had seen a lot of recent modifications on its way to becoming a dedicated track monster. In addition to fitting MCS coil-overs and Hoosier A7 tires, Sebastian also ran a smaller supercharger pulley, race gas tune, headers and additional heat exchangers to manage all that thermal energy. 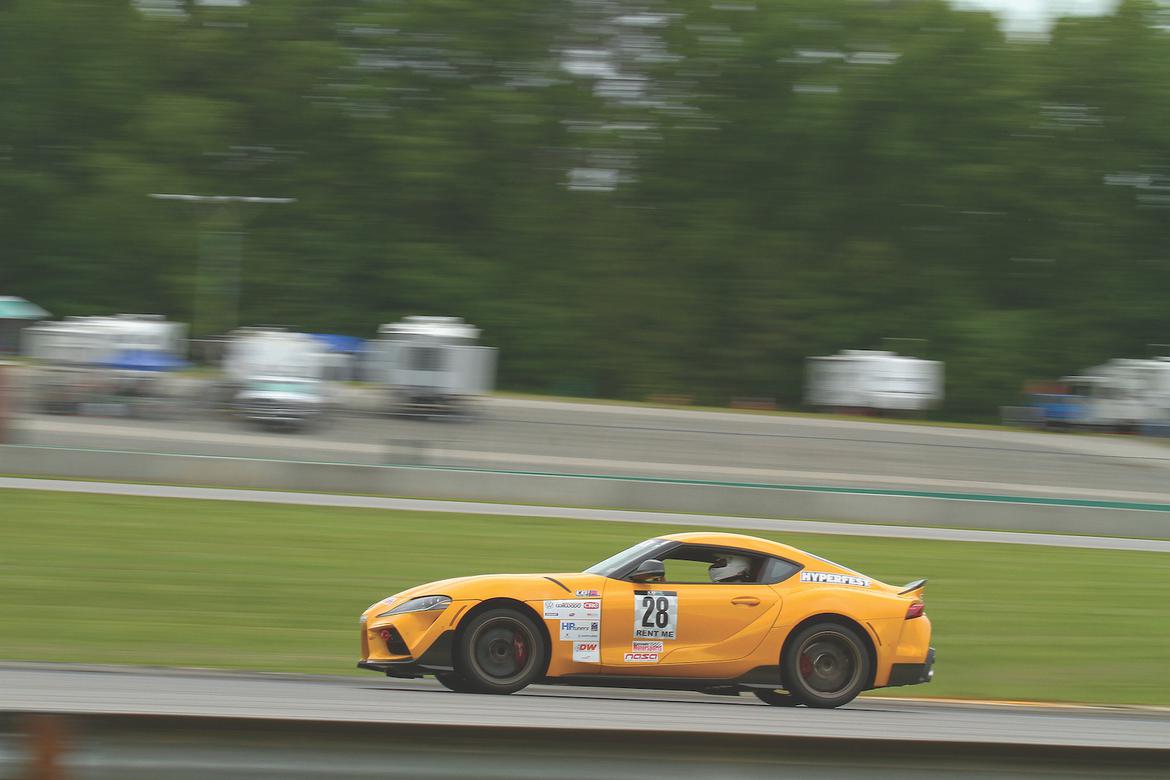 Jack simply slapped a set of Yokohama A052 tires on a stock Supra and ran down some serious competition. The Supra came from Let’s Go! Track Days, a firm that rents high-performance vehicles for track days and time trials to experienced drivers. Jack has lots of top finishes in NASA’s Spec E30 series under his belt and set the top time for a driver on 200tw rubber. 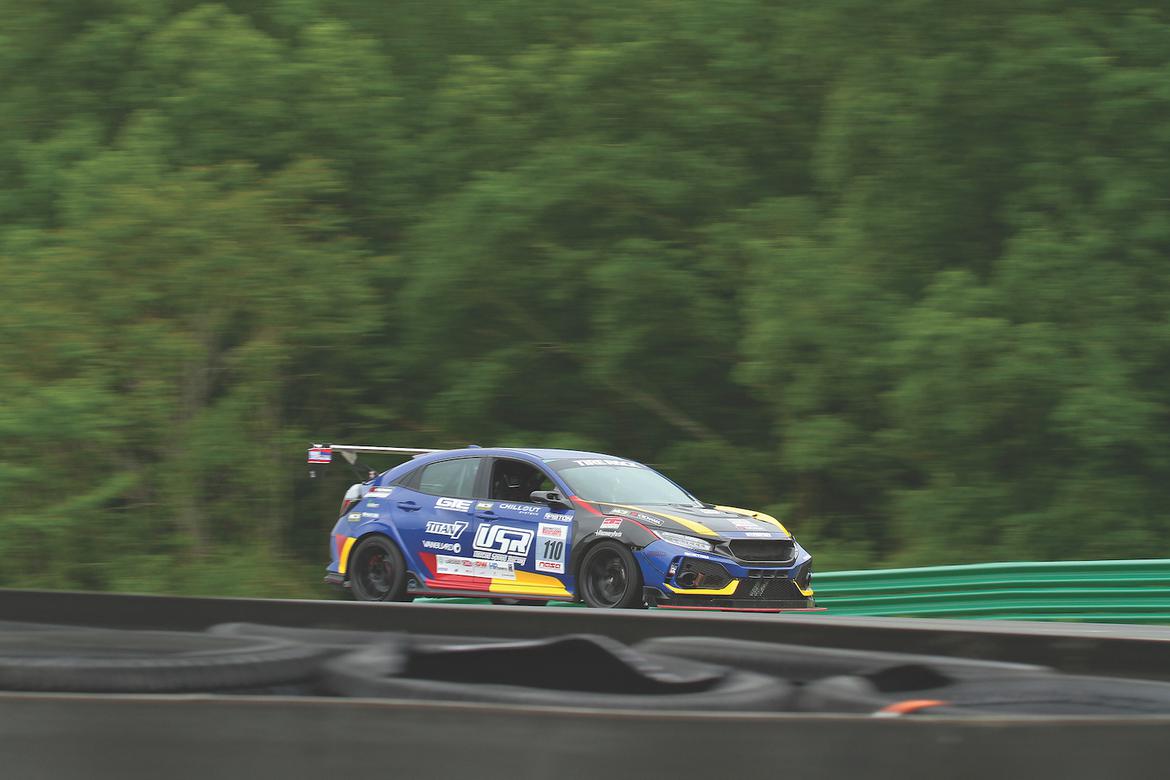 Despite a host of mechanical issues–transmission, brake and wastegate problems all cropped up during his first session–Trever still claimed the event’s top time for a front-driver. He also missed setting the top time on 200tw rubber by a scant 0.010 second.

This 3200-pound Civic featured MCS damping, AP brakes and a 500-plus-horsepower engine prepped by 4 Piston Racing. The team took the transmission’s shaking as a sign to pack it up after just a few laps. 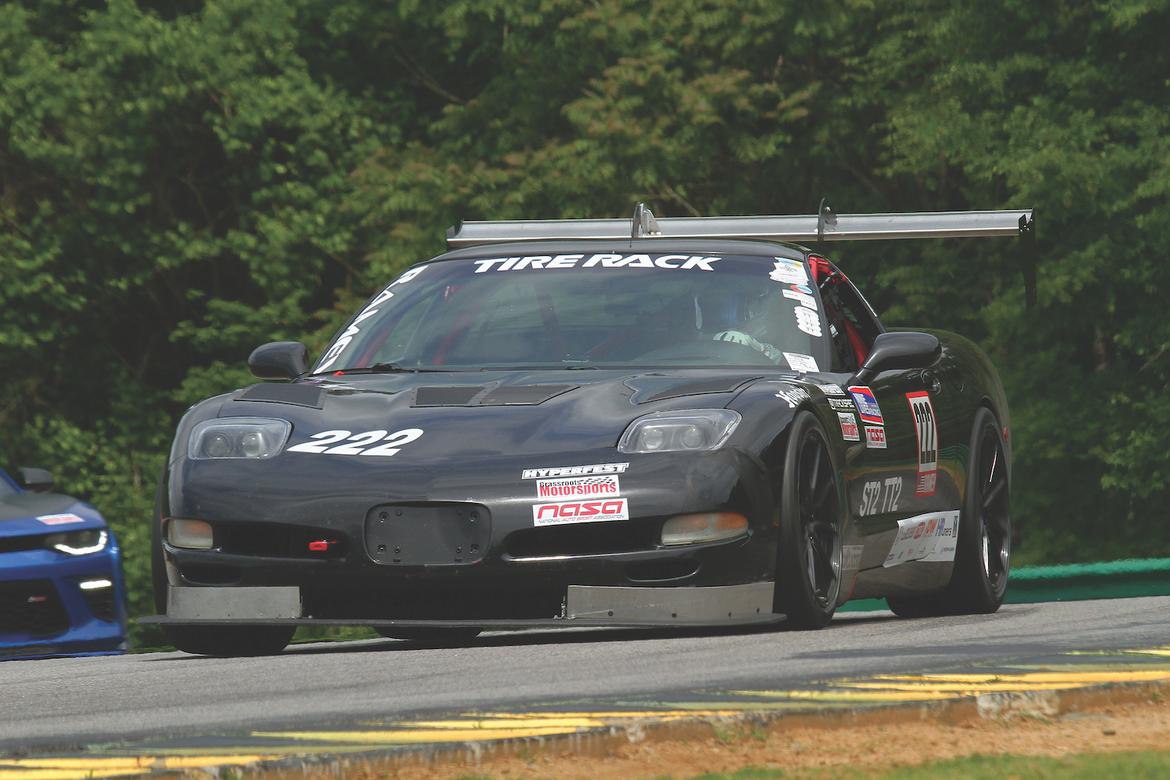 Another UTCC rookie, Taylor had plenty of experience and several podiums in NASA’s Mid South Region and World Racing League. His LS6-powered C5 was upgraded with only a cam and dropped about 375 horsepower on the pavement through Hoosier R7 rubber. Penske shocks and Wilwood brakes rounded out the mechanical package, along with some subtle bolt-on aero mods like a splitter, wing and hood vents. 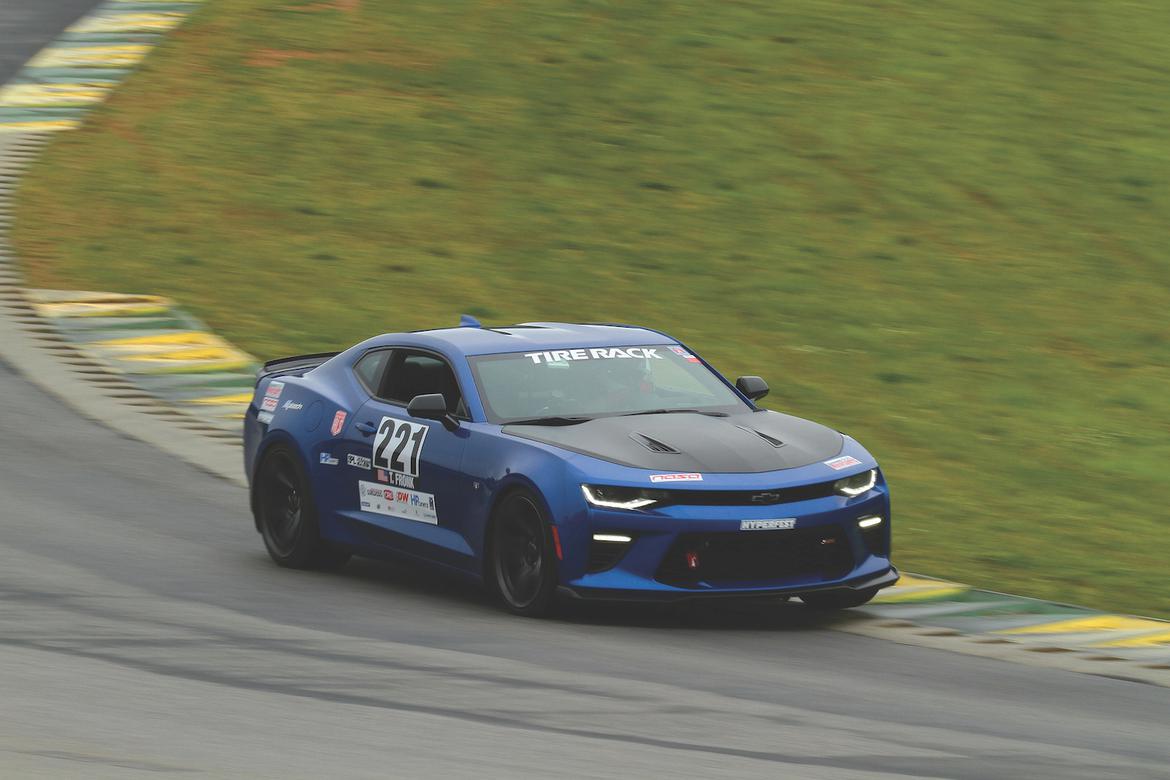 Tom came to his first ever UTCC with a 500-horsepower Camaro featuring lots of engine modifications for both power and durability. Head work, bolt-on power adders, an upgraded cam and a modified oil pump helped it squeeze out more power, while the stock magnetic shocks were augmented with a DSC controller and some Vorshlag camber plates.

Oh, and did we mention Tom rebuilt the engine himself in his home office? “It was hot” was his perfectly understandable rationale for bringing the project inside the house. Luckily, his engineering background helped him with the meticulous process, and three straight successful test days at Daytona before the UTCC assured him that he had done everything right. 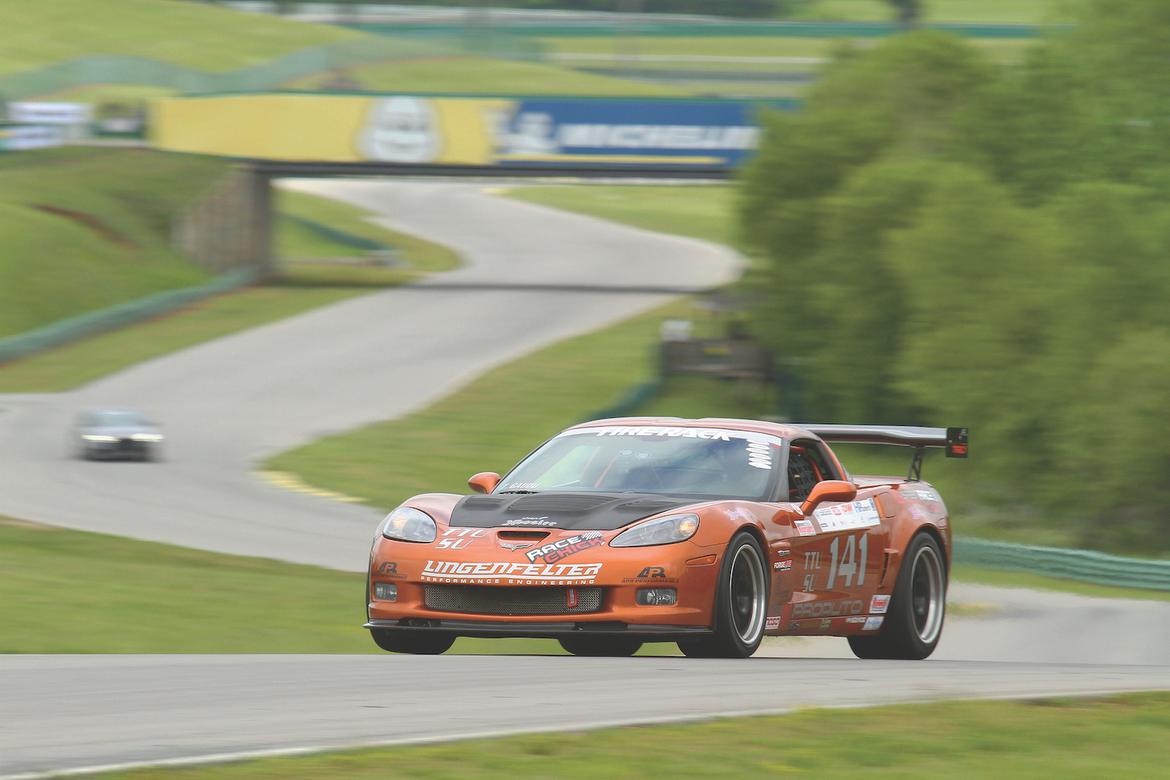 Tracy has run three UTCCs in her C6, made three Knockout Finals, and dealt with mechanical issues sabotaging her competition runs at all three events. This year, she was able to shake down a new set of Alcon/Pro-System brakes, a welcome addition. 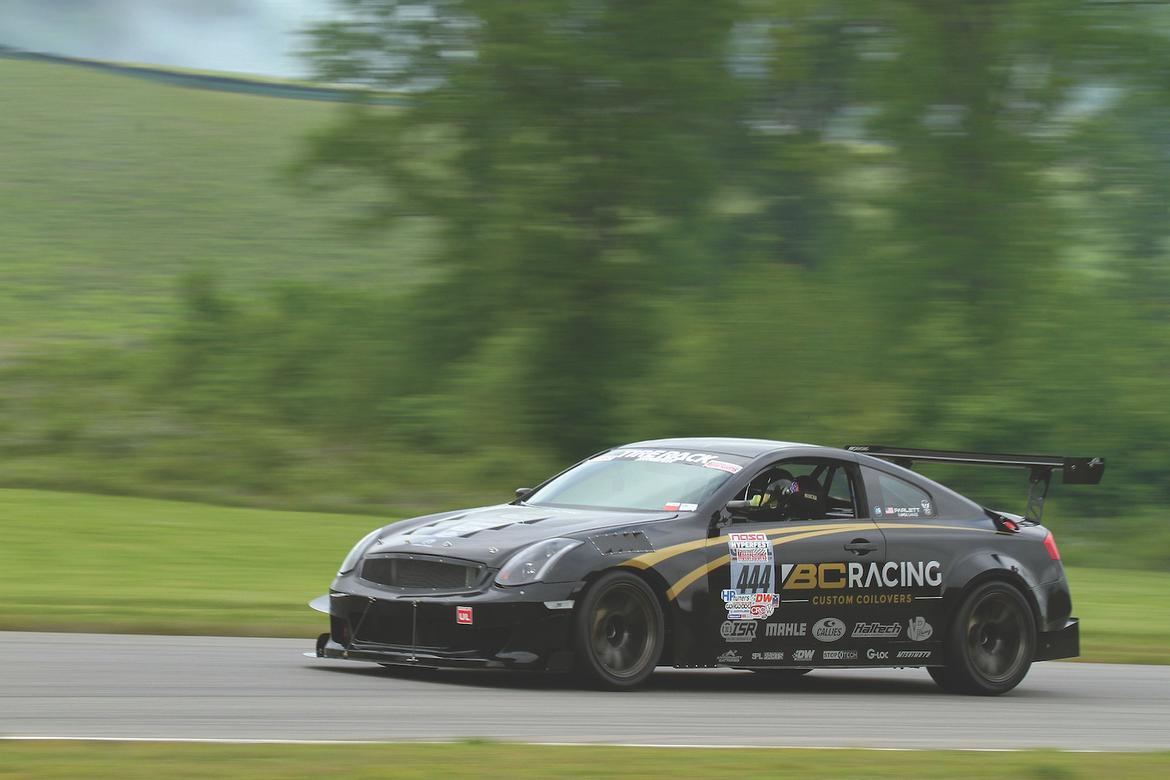 The Infiniti G35 is already a handsome package, but Kevin’s added some V8 muscle–a 500-horsepower LS3–plus StopTech brakes, Hoosier A7 tires, BC Racing coil-overs and a host of pieces from SPL to keep things pointed in the right direction. 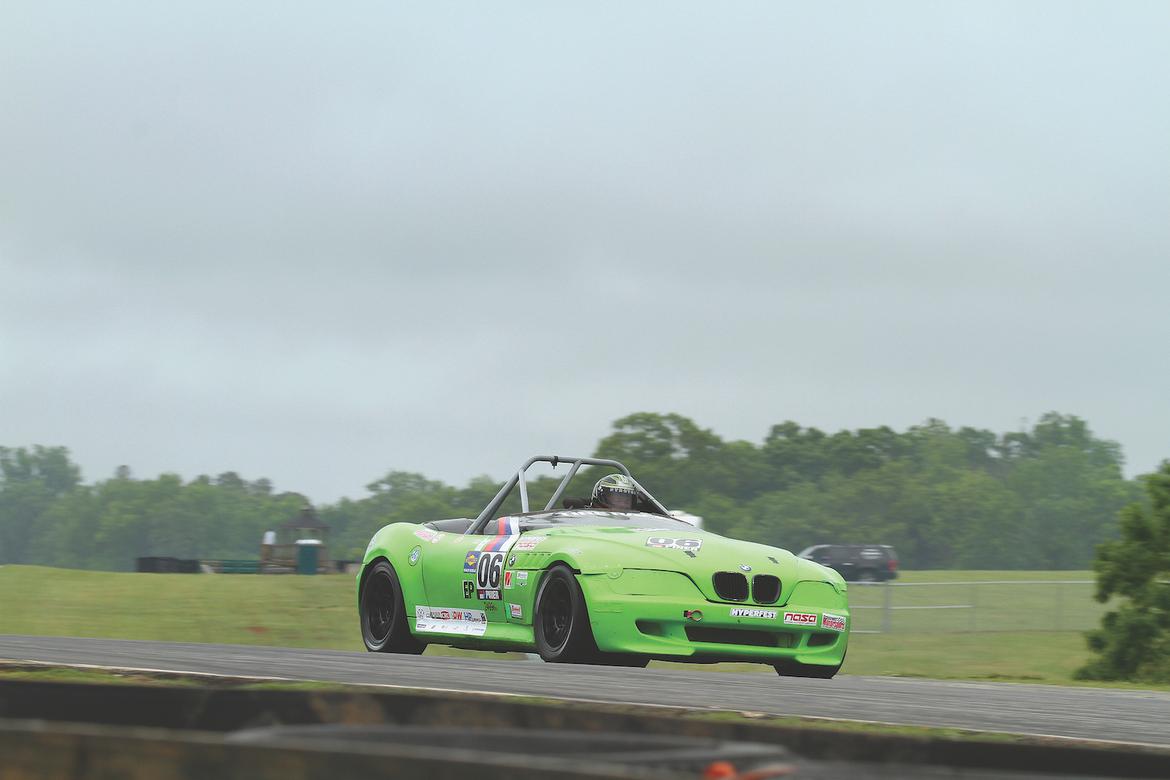 Doug has competed at the SCCA Runoffs for more than 21 straight years, but this was his first UTCC. His Z3 was prepped for SCCA E Production competition, meaning it was a fully gutted race car weighing less than 2500 pounds. Its 2.5-liter inline-six threw 225 horsepower to the tarmac. 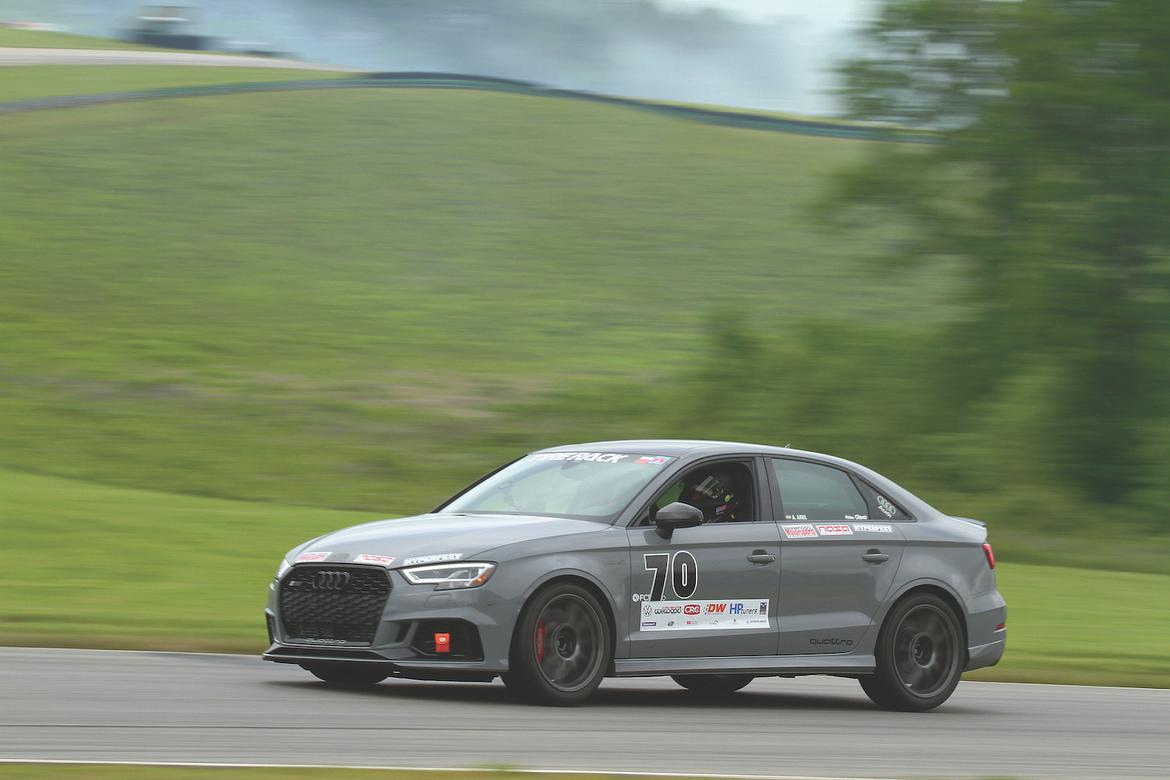 This wasn’t Arul’s first UTCC, but it may have been his most exciting. After the competition, he emailed us to say that sharing the track with Tanner Foust was one of the most enjoyable moments of his track career. Of course, beating Tanner on track by a second was icing on the cake. 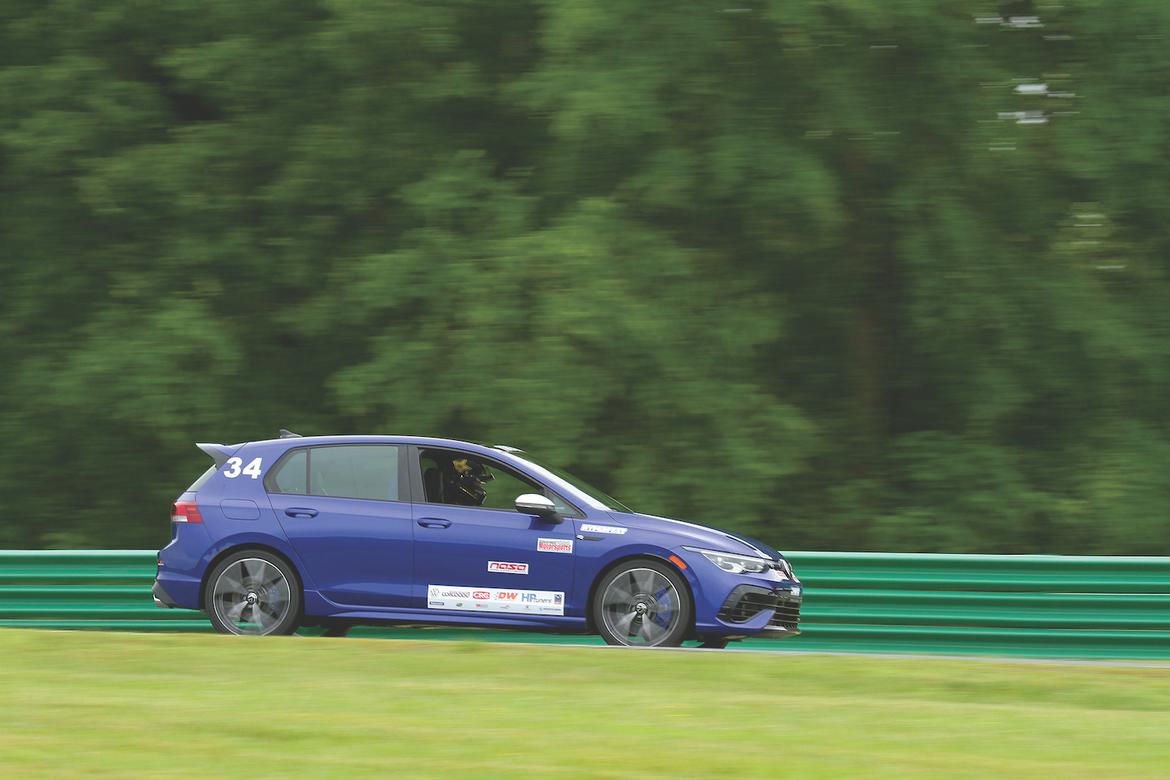 Yes, that Tanner Foust: TV host, stunt driver and rallycross competitor. For the 2022 edition of the UTCC, Tanner plucked a bone-stock VW Golf R from the media fleet and laid down some serious times around VIR. He left the entire group with something, too: Check out our YouTube channel for his tips on finding grip in the rain. 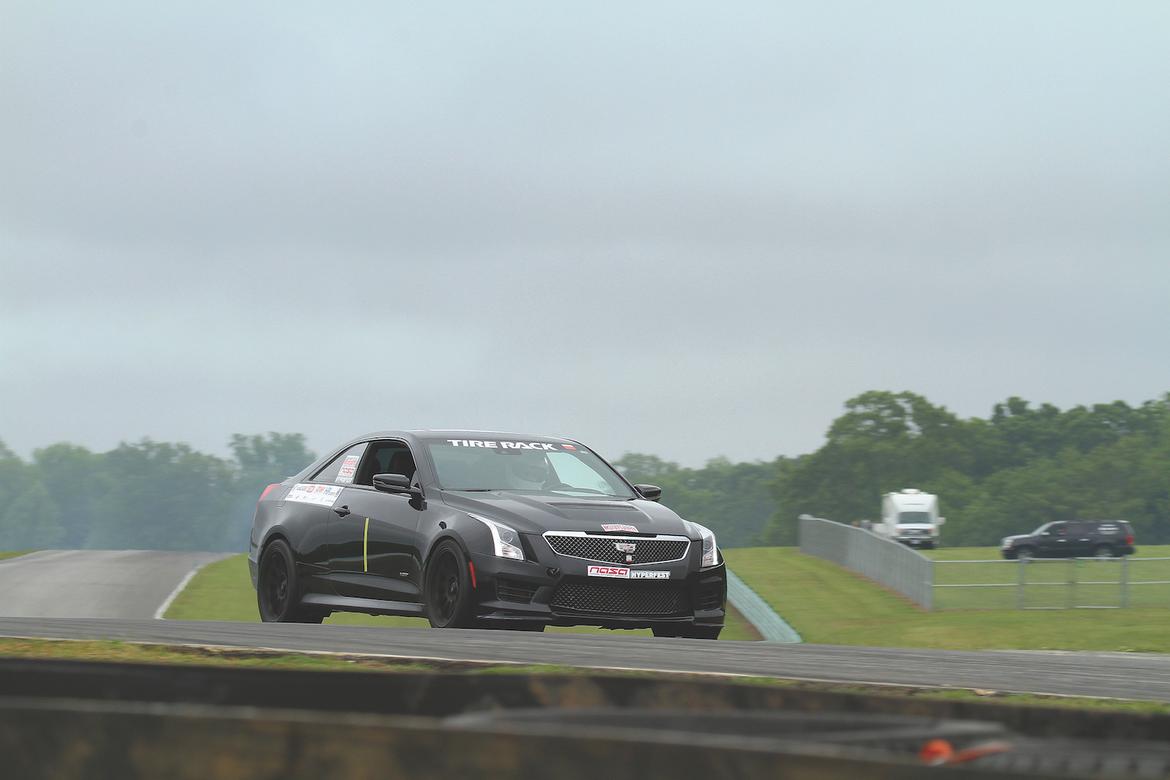 The Cadillac didn’t drive to the UTCC, though. William and the car took Amtrak’s Auto Train from Sanford, Florida, to Virginia. On the way back home, they spent several extra days tackling the back roads. 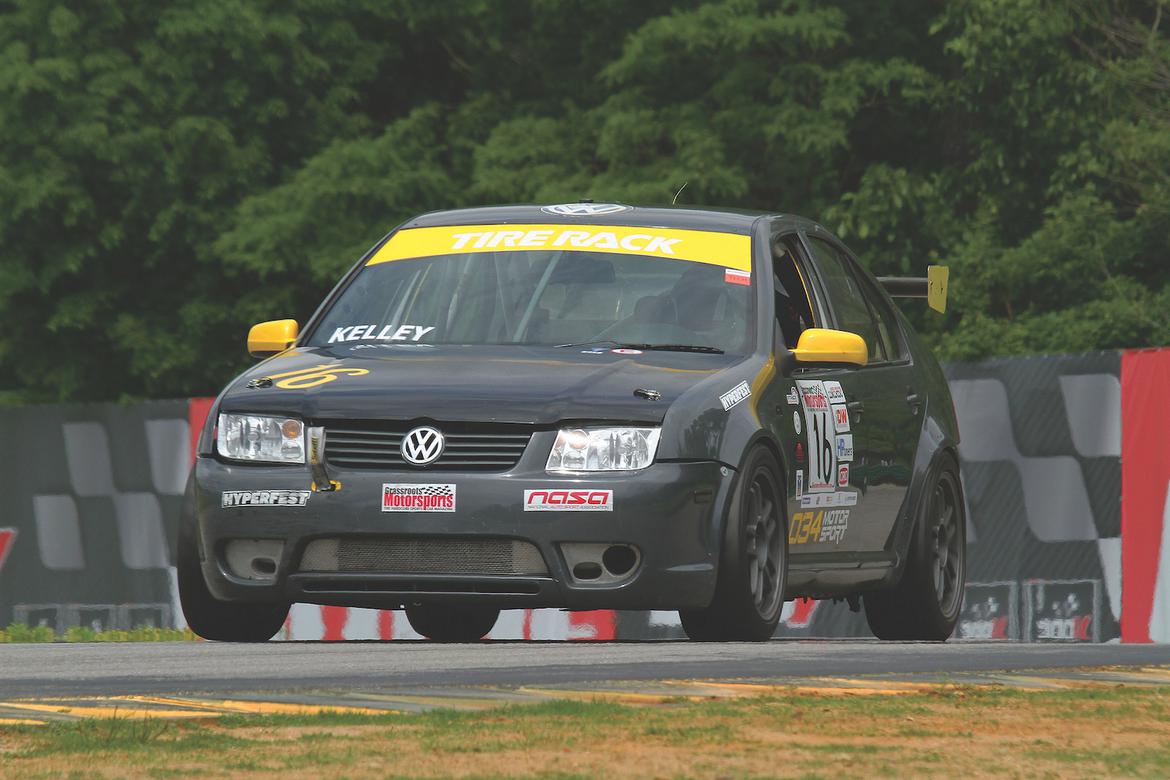 Amy came to her second UTCC driving the same race-prepped, 1.8-turbo VW Jetta she entered last year. In 2022, however, she carved nearly three-quarters of a second off her previous best time, a hard feat under this year’s conditions. She credits the improvement to a switch to Falken Azenis RT660 tires and additional VIR experience.

WATCH: Ride onboard for Leclerc’s impressive pole lap at Monza

Endurance racing & stock cars: Do they have anything in common? | Articles

Title win in Japan would be ‘extra special’ – Verstappen

FORM GUIDE: Will Verstappen clinch the title as F1 returns to Suzuka for the first time since 2019?

E85 Ethanol Fuel: How to Corn Your Way to More Horsepower | Articles