Faster autocross times? There’s a driving school for that. | Articles

[Editor’s Note: This article originally appeared in the November 2008 issue of Grassroots Motorsports]

On the surface, autocross looks so easy. All you have to do is drive through the cones quicker than anyone else. In reality, there are so many subtle nuances that it can take years to figure out the sport’s finer points. If only there were a way to speed up the process.

Meet the Evolution Performance Driving School, the only nationwide school that specializes in the art of autocross. When it comes to higher learning, academics have Harvard and Yale, and we cone carvers have Evolution.

The Evolution crew doesn’t really have a home base, as it’s more of a traveling road show. Their instructors work with various local clubs. The local groups secure the site and provide the cones; the Evolution people bring the knowledge, experience and curriculum. They always use a standardized course, featuring a combination of elements that drive home specific lessons.

Can you teach an old dog new tricks, or is this really only suited for beginners? That was our question, too, so we recently put two staff members through the school. Each came in with a different level of experience.

David, our editorial director, isn’t exactly new to the sport, as he’s been a regular autocrosser since 1992. While he has won a few local titles through the years, they have mainly come from consistency rather than outright speed. He’s probably a solid mid-packer on the local level.

Tom, our production editor, is newer to the sport. He’s only been at it since about 2003, but he’s been a quick learner thanks to stiff competition. Even so, he was still on his first-ever set of R-compound tires.

Basically, each guy could benefit from some education. David has basically stalled while climbing the skills ladder, while Tom could use some work expanding his skill set.

No matter how much wood and lucite sit on the mantle, all Evolution Performance Driving School participants must start with the Phase 1 program. This one-day course fully covers the fundamentals, yet Evolution officials note that it’s also a great refresher for experienced drivers—even those who compete at the national level.

Tuition usually starts around $250, and students must provide their own cars. Two-driver cars are allowed, but each of our own students decided to bring their own wheels. David drove a new Subaru Impreza WRX wagon, and Tom brought his 1994 Mazda Miata R. Both cars were more or less in stock-class configuration aside from tires: The Subaru rode on 225/45R17 Nitto NT01 tires wrapped around Rota wheels, while the Miata had 185/50R14 Kumho ECSTA V700 tires on its stock rims.

We arrived early on the day of the school, unpacked the cars, swapped tires and started walking the course. A quick meet and greet started the day, and one thing surprised us: Despite the nice equipment in the paddock, most of the dozen or so attendees had less than five years of autocross experience.

We also met our instructors. Tim Aro, Eric Peterson and Jean Kinser would be holding our hands that day. All have been working with the school for years, and they’re more than just coaches—they all have multiple SCCA national Solo titles under their belts. 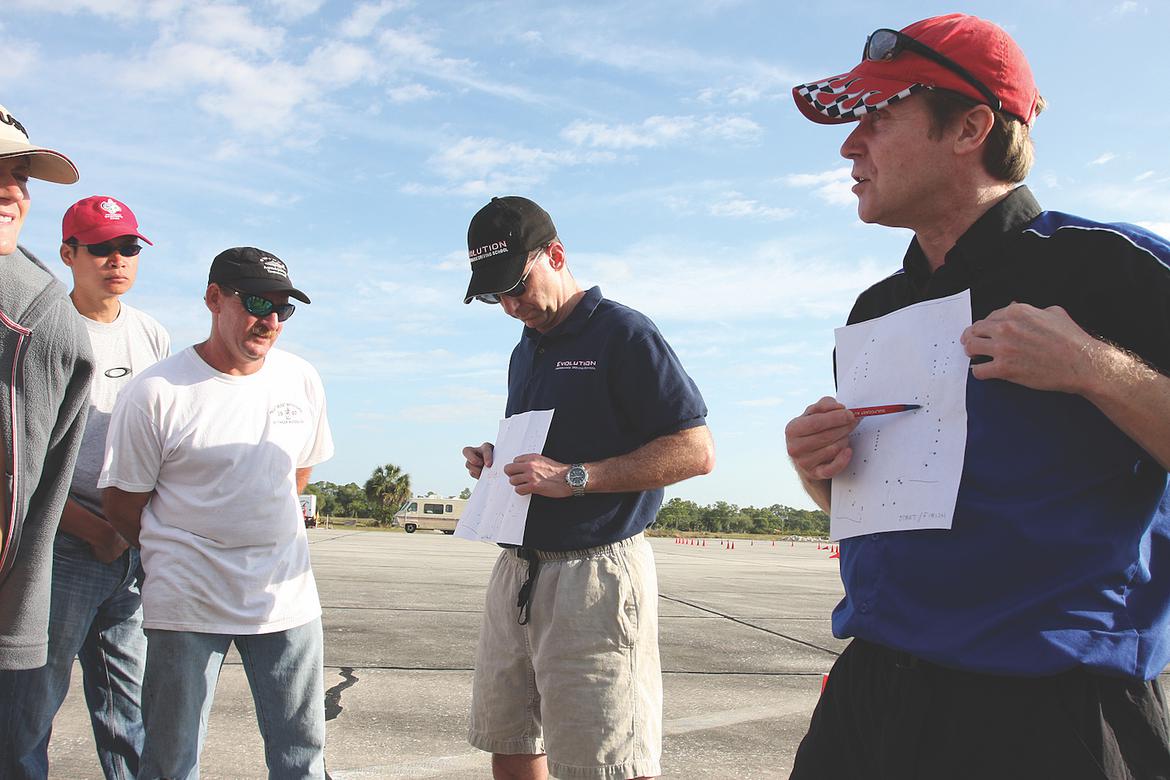 The first exercise was fairly easy, as we each took three runs—just like a normal autocross. The instructors initially watched from the sidelines, although later in the session they rode along.

After watching the students take the course, it was easy to see that there were students of widely varied skill and experience levels. Tom said his three runs felt pretty good, perhaps due to all the anticipation he had going into the event. The main purpose of the exercise was to identify problem areas, and there were plenty. 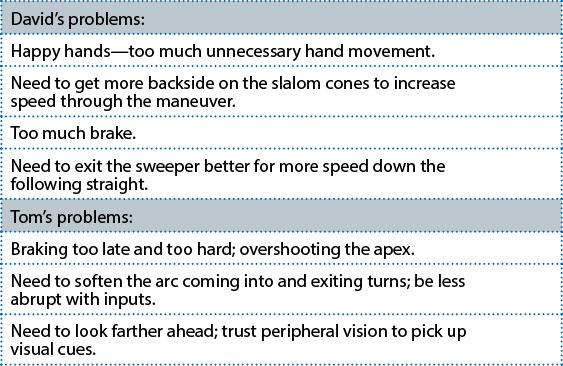 Our midday meal was billed as a working lunch, as we all sat together and compared notes. It gave everyone an opportunity to discuss problems as well as possible solutions.

Much of the talk centered around braking, as apparently using too much or too little is a common problem. A lot of students—the GRM staff included—were pressing their brake pedals too much throughout the course. Use the brakes to move weight to the front wheels to help turning, the instructors explained, yet avoid overusing them. Hitting the brakes too often simply slows the car too much, leading to a slow run.

The Evolution staff had a take-home message: Brake less, lift more. Simply lift off the gas to slow down the car and resist the temptation to always stomp the brakes. Maintaining momentum is key.

However, that nugget of info came with a caveat: If you have the choice between braking too early or too late, early is better. It’s better to brake six feet too early rather than six inches too late, Tim Aro said. Blow a braking point, and you’ll plow through the next turn. Brake too early, he noted, and the turn can be salvaged. Once the gross speed adjustment is done, the driver can do any fine-tune braking before the turn. 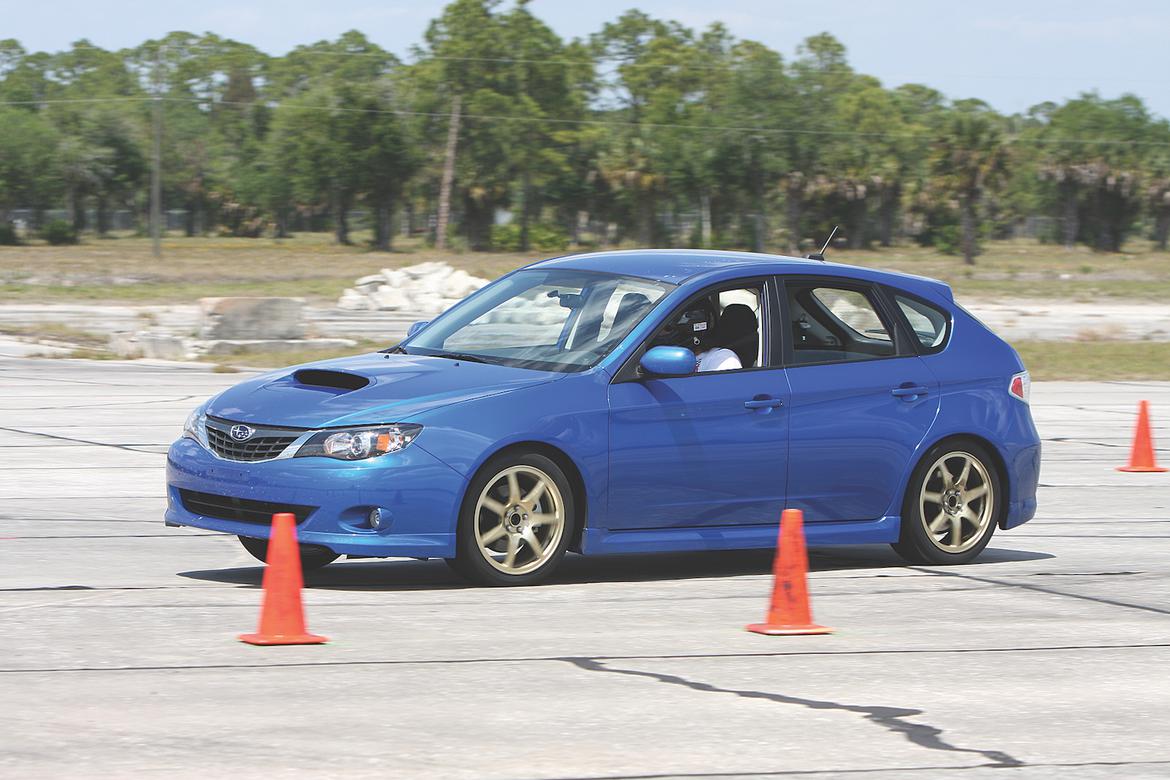 We also discussed lines. A lot of autocrossers are slaves to the cones, but that might not be the best strategy. Always look for ways to make acceleration zones that carry the most speed, the instructors told us, as the fastest line is not always the one that’s closest to the cones. Most courses can be defined by maybe 20 cones; the other hundred or so are noise that needs to be tuned out.

Another common problem discussed was steering input. The vast majority of students hang on to too much steering input, Tim explained. They don’t unwind the wheel enough at corner exit.

Finally, we discussed looking ahead. It sounds simple, but we’re guilty of not looking far enough down the course. The more you look ahead, the faster you’ll go. On a related note, trust your peripheral vision. The information gathered out of the corner of your eye can be strong and reliable.

After lunch, we worked on honing our visual skills. If you think about it, visual clues dictate just about everything we do while behind the wheel: when to turn in, where to place the car, how hard to brake and so on.

To help illustrate the point, students piled into some of the larger vehicles available, including David’s WRX wagon. With a full boat, the instructors took to the course as they called out the various focal points they were spotting. Nearly all of the students remarked that the lesson drove home the importance of looking far ahead—way far ahead, sometimes even looking past troublesome course elements. “Peripheral vision allows quicker reactions than looking straight at the subject,” noted Eric Peterson. 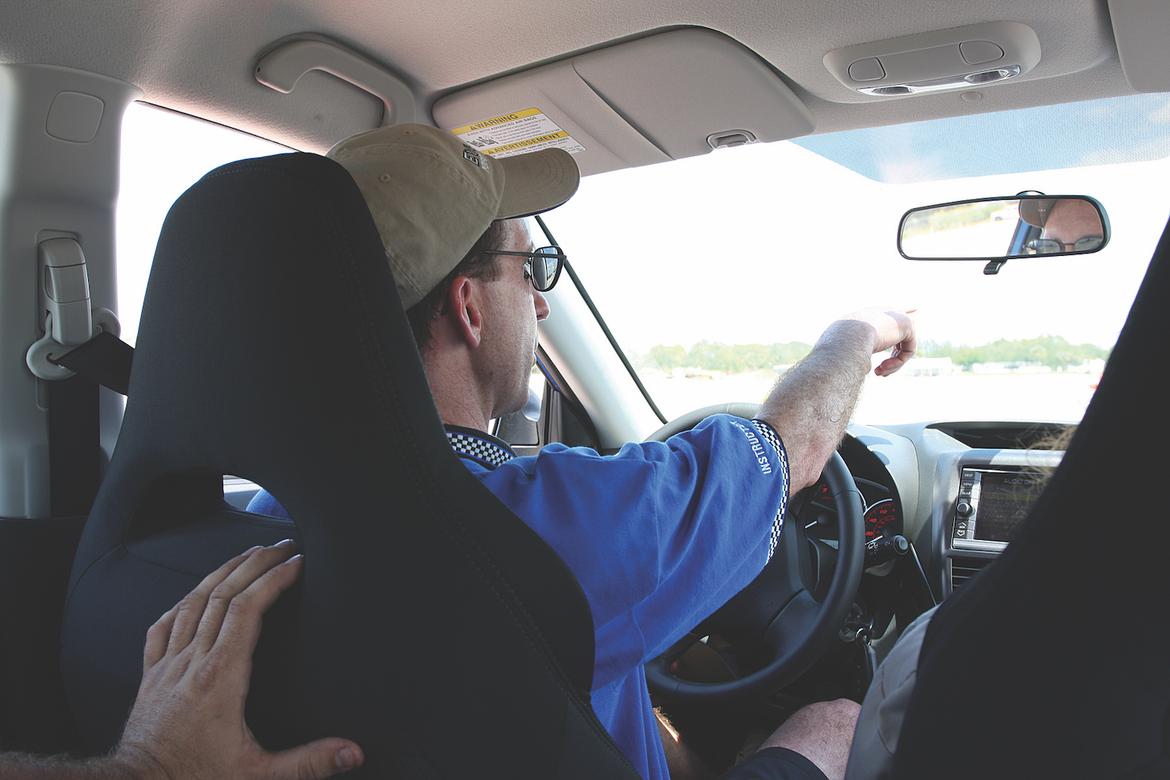 Once the instructors were confident that the students clearly understood the process, more seat time was in order to help reinforce the lessons. For the third period of on-course instruction, the instructors observed the student drivers from inside the car, watching their eyes, heads and hands as they went around the course.

During subsequent runs, the instructors asked us to state aloud what we were looking at while driving. This was surprisingly challenging, as it forced students to rise to another level of situational awareness. 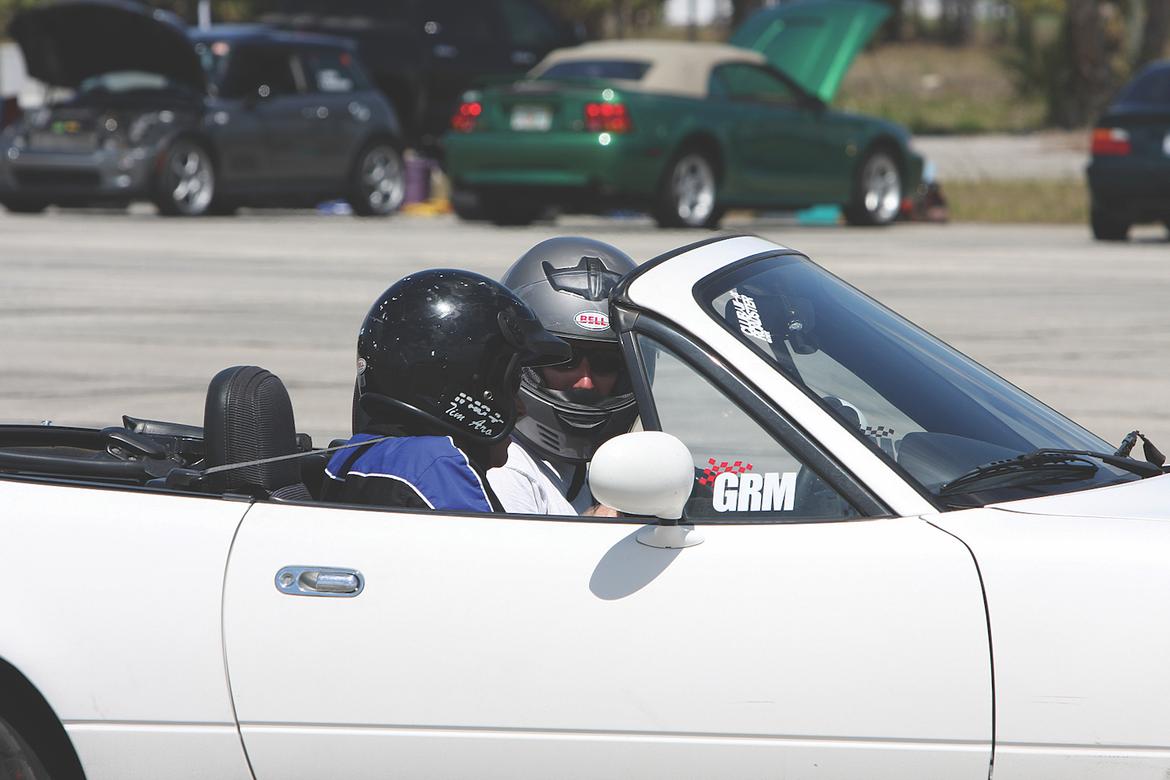 We closed the day’s lessons with a bit of testing—three more runs on the same course we’d driven at the beginning of the day. The Evolution instructors pointed out that a direct comparison of times wouldn’t necessarily mean much; after all, most autocrosses won’t allow you 20 or more runs to develop a strategy for the course. Additionally, the course had simply become “slower” as the surface warmed throughout the day. Likewise, our tires had been fried past their happy points.

Despite the inability to really compare times, the instructors gave us a passing grade. We felt more confident behind the wheel, did a better job of identifying the fast line through the cones and simply drove more smoothly—and as any top driver can explain, smooth equals fast. 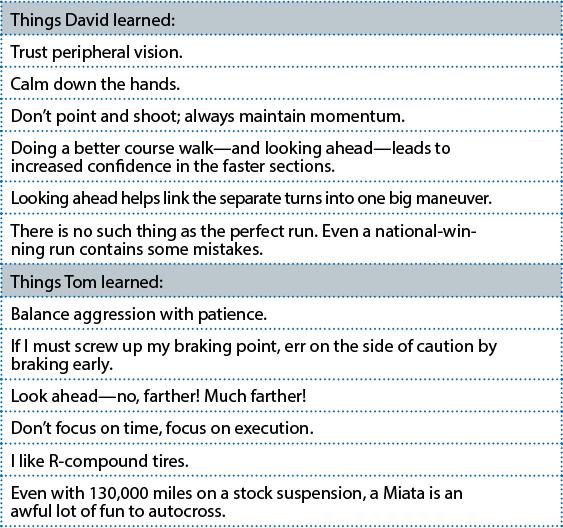 Decision not to pit Hamilton was risk worth taking, say Mercedes · RaceFans

Decision not to pit Hamilton was risk worth taking, say Mercedes · RaceFans