Admit it: Late at night, when the family’s asleep, you find yourself cruising online for cool, old-school Japanese cars that never officially came to the U.S. All those Silvias, Skylines, Cefiros, Lancers, Beats and Cappuccinos begin to suck you in.

It’s perfectly natural to think about putting one of these rare automotive trophies in the garage, and hitting the local scene in some kind of right-hand-drive import rarely seen on these shores.

Then reality sets in. For most of us, the expense, bureaucratic hassle and legal issues required to import a one-off are enough to kill the idea. But for some people, like Arnel Ilog, these are challenges rather than obstacles.

Arnel and his clean 1971 Nissan Skyline are proof that thoughts of importing something old and Japanese don’t have to remain a dream. The silver-gray GT-R look-alike is fresh off the boat from Japan, down to the right-mounted steering wheel and goofy stickers found on the intake manifold.

Arnel is a real example of an ordinary guy with an ordinary job importing an extraordinary car—in this case one of the most recognizable and beautiful vintage Japanese cars ever produced. And despite the car’s cult-like status both at home and abroad, Arnel owns one of the few examples here on our shores.

The Skyline nameplate has been available in Japan since 1957, and while it’s now commonly associated with Nissan, the model started at Prince, a competing car company. In 1966, the Japanese government “recommended” that Nissan purchase Prince.

At the time, Prince was far ahead of Nissan in technology. Nissan was building frumpy sedans based on small, slow pushrod engines, while Prince was dealing in Mercedes-inspired overhead cams and independent rear suspension designs. Prince’s flagship sedan was the impressive Skyline.

Upon the merger, Nissan continued to produce the Skyline in both two- and four-door configurations. The Skyline was the Japanese equivalent of a muscle car: Even though little performance was needed to handle Japan’s national 35 mph speed limit, the Skyline boasted a powerful 2-liter engine plus impressive grip for the day.

Nissan released a redesigned Skyline for 1968, and the new car carried the GC10 chassis code. The updated model was available with a range of engines and in both two- and four-door sedan configurations.

The most famous version was the GT-R model, a lightweight homologation special that sported flares, spoilers and a 160-horsepower, 2-liter twin-cam engine. Real examples are very rare today, even in Japan, although many of the standard-issue Skyline models have been converted to GT-R clones. Fortunately, the standard GT model came with a decent engine, a 2-liter version of the inline six found in the American-market 240Z. Production of the GC10 Skyline ran through 1972.

Arnel found his GC10-chassis Skyline in the same place that most of us find anything these days: the Internet. However, the discovery was not intentional.

“I was into RX-3s, and I saw old pictures of them racing against Skylines,” Arnel explains. “I wondered what kind of cars they were—they are really a cool-looking car. Anyway, the more I read, the more I got interested in them.”

Arnel has always been a dedicated connoisseur of vintage Japanese iron, and at the time his stable included an AE86 Corolla, TE27 Corolla and two RX-3s. “I was thinking of getting another RX-3, but after I saw the Skylines and started researching more about them, I really liked them,” he continues. “I started collecting pictures of old Skylines racing, and decided to look for one.”

He knew such a rare car would require a big cash investment, so he decided to thin his herd a little. He sold one of the Mazdas plus the AE86 Corolla. Flush with cash from the sales, about three years ago he began to look for a GC10 Skyline. He asked a friend in Japan to help—a friend who happened to be in the import/export business. 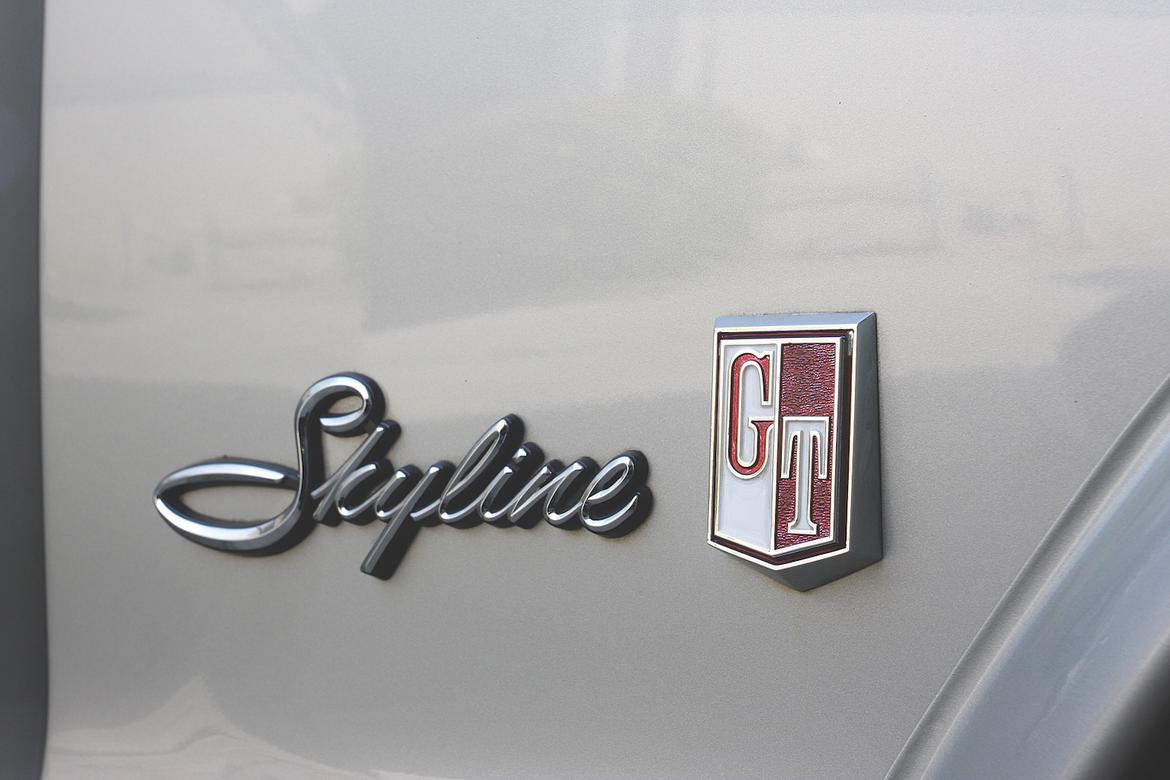 “My friend in Japan was helping me look for a car and thought it would take a long time,” Arnel explains. “I got anxious and started looking around on my own, too.”

During one of these late-night searches, Arnel came across the Web site for Rocky Auto, one of Japan’s most popular Z-car and Skyline specialists. Arnel found his dream car on the site.

“The ad was in Japanese, so I had to use an Internet translator service to get the details of it,” Arnel explains. “It sounded good, so I contacted my friend and he went to take a look at it.”

The friend vouched for the car, so Arnel made an offer for it and put the sale in motion. His friend brokered the deal and arranged for the title, customs and shipping charges. According to Arnel, the whole process was incredibly smooth and the assorted fees only set him back around $2500. Arnel says, “I sent him the money and he took care of making the deal and getting the car shipped. Once it arrived here, the car cleared customs and was delivered directly to me.”

The registration process was also much easier than expected since the car was so old. Arnel simply brought the Japanese title and customs documentation to the DMV and applied for a new title. A couple of months later, his new pink slip and registration arrived in the mail.

Unfortunately the car itself was not as hassle-free as the import and registration procedures. As Arnel discovered, a handful of online images can hide a lot of body putty and welding. The car was nice, but its condition was nothing like that claimed by the pictures and descriptions.

“The body was not in as good of shape as I thought,” he explains. “There is rust here and there underneath.”

Some of the equipment also wasn’t as promised. “The ad said the car had 15-inch Watanabe wheels, but it came over with 14-inch wheels, and the strut tower bar was missing.” 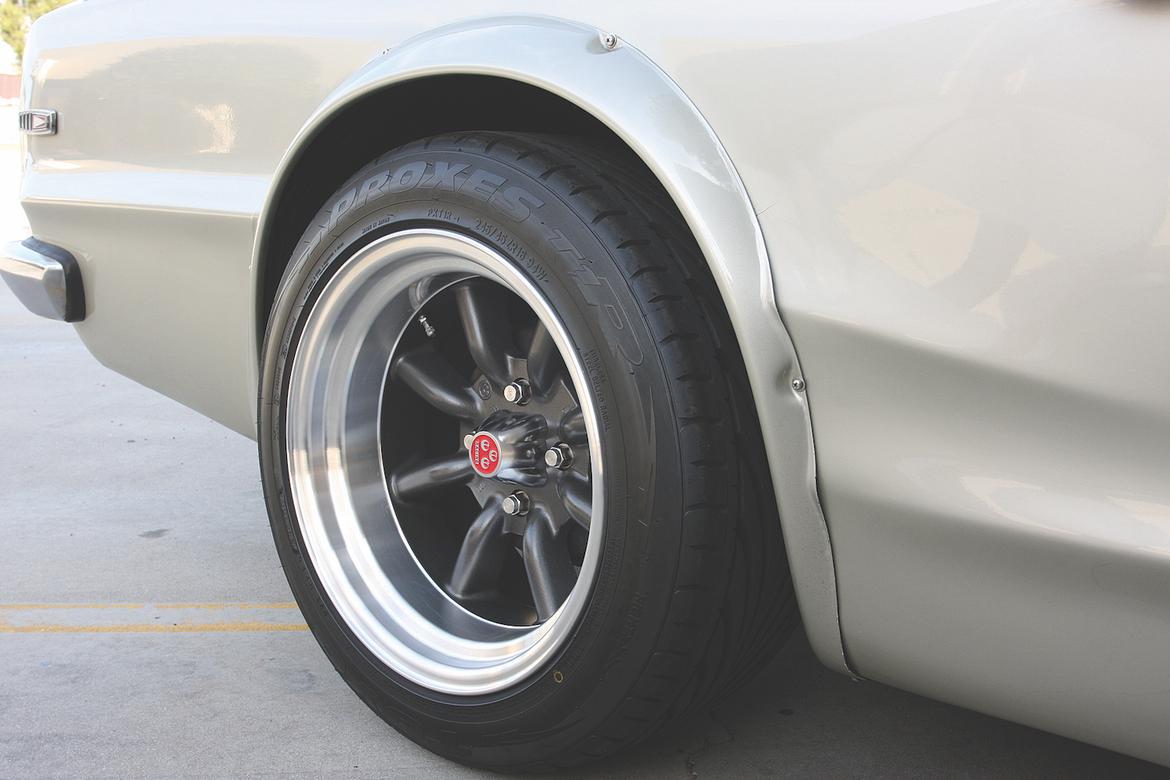 The Watanabe wheels that came with the car were smaller than promised, so Arnel upgraded to 16-inchers.

The car also had some mechanical issues, as the carbs and gas tank were full of water. “The shipping service was roll-on, so the car was driven on and off the ship,” Arnel explains. “I was surprised that it was able to get on the ship at all.”

Arnel tore into the car right away, trying to get it running as well as it looked. He pulled the carbs and dropped the tank so both could be refurbished.

The car ran better after the work, although he admits that it’s still not perfect. He’s not too upset about the condition of the car, but he does feel like he was a little taken: “Really, that’s what I get for buying a car from several thousand miles away.”

Once the initial surprise wore off, Arnel got to know his car a little better. Despite the racy details, it’s actually a two-door 1971 Skyline 2000 GT, a more common version that bears the GC10 chassis code. The badges, spoilers and flares make it look like a GT-R, although it doesn’t have the GT-R drivetrain and suspension.

Instead of the GT-R’s S20 twin-cam inline six, the GT was originally built with an L20-spec single-cam engine. Somewhere along the line, Arnel’s car was swapped to the inline-six L28 and matching transmission—the chassis was designed to accept both SOHC and DOHC engines. 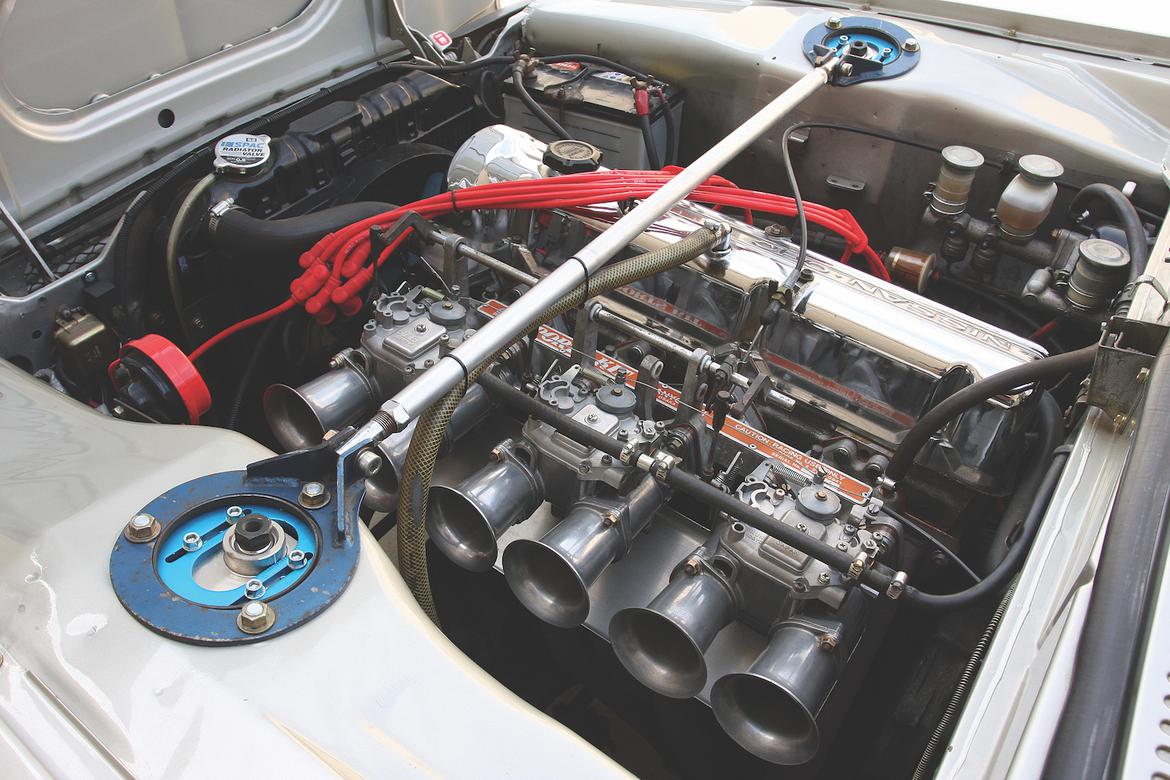 In place of the stock L20 single-cam engine, his Skyline now has a larger L28 inline six.

The included transmission had a few issues, however, including weak second- and third-gear synchros. Since Nissan used the same drivetrain in the American-market Z-car, Arnel easily found a replacement.

The interior is mostly original, but Arnel noticed some discrepancies. For example, the overhead console has a light for power locks, but the car has manual ones. Some of the switches from the center console are also missing. Arnel believes the car was originally delivered with power windows and locks, and that someone swapped out the door panels or the doors themselves.

Arnel has also mixed in a few personal touches. “I added Cusco camber plates to the front and adjustable shocks to the rear, as well as Recaro seats and 16-inch wheels, but the rest is pretty much how it came,” he explains.

That may not be the case for long, as Arnel is now planning a full restoration. While he never intended to put that much work into his Skyline, the poor condition of the car’s floor led him down that path. “The underside is kind of embarrassing,” he admits. “It looks nice on the outside but it’s rough. I’ll have the body shop weld up all the rust holes, which will be cheaper than importing body panels from Japan.”

He’s already started collecting rubber and trim parts, which are being reproduced in Japan. Luckily the car’s iconic status has helped ensure a steady supply of restoration parts on the other side of the Pacific, though accessing them can be tough for owners in this country.

As for the suspension and drivetrain, the fact that the Skyline shares its DNA with the early Z-car means that the sky is the limit for engine and suspension modifications and restoration. Arnel hopes to build a stroker L28 to keep the single-cam looks.

“My friend has an RB twin-cam motor in his, but I want to stick with the L-series,” Arnel explains. “I will probably improve the suspension, too, and add adjustable shocks to the front.”

So Far, So Pleased

Despite not getting exactly what he expected, Arnel says that owning such an unusual car is its own reward. Driving from the right seat is a bit tough, he admits, but the stares are worth it. 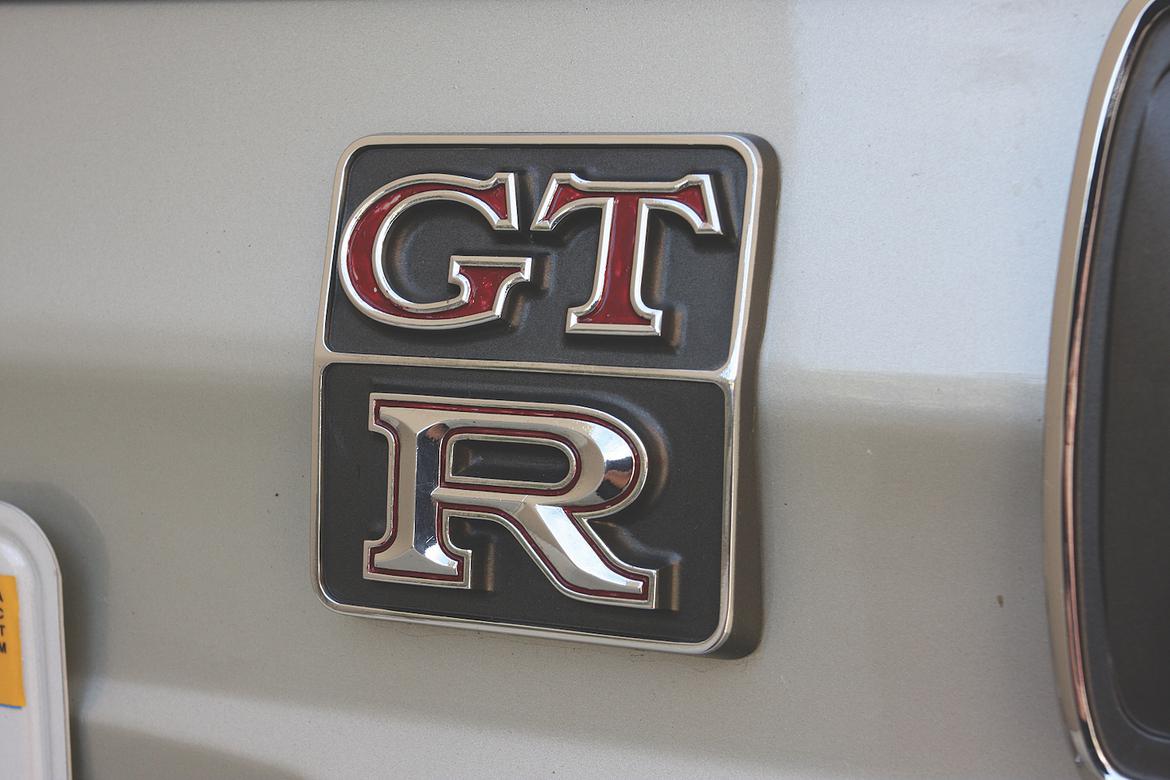 Despite the GT-R badges on the nose, Arnel’s car is a Skyline GT at heart. Previous owners made some changes inside and out, so he’s had to do a lot of research to discern original from aftermarket.

“It’s fun to have this car,” he adds. “I get followed to the gas station a lot—about half the time, people know exactly what it is and they start talking to me about it.”

As for the others? They have no idea, but something about the car catches their eye—the same mysterious quality that sucked in Arnel. 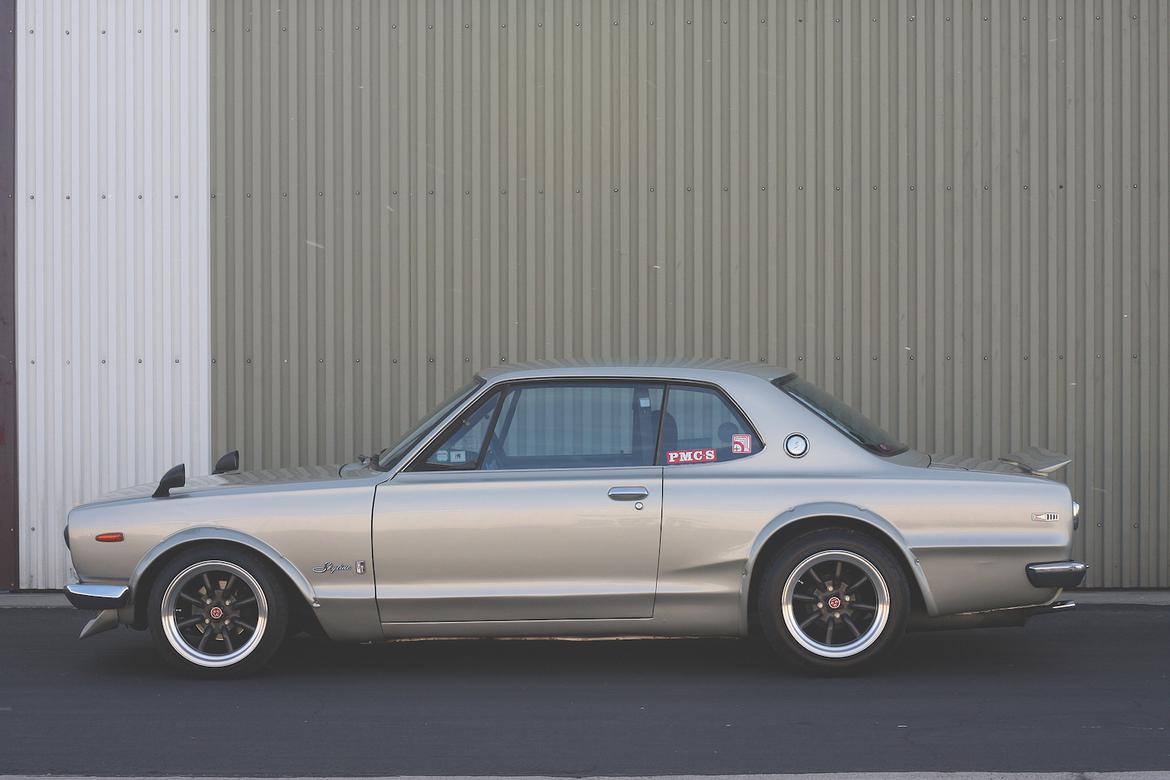 (Also, yes. Hakosuka.  When I become Benevolent Dictator of Planet Earth, I will have one.  Because that is probably the only way to get one.)

When I was still in college you could get a 4 door imported and titled through JDM Legends for about 15k, a coupe for roughly 20k, those days are long gone..

There is a real four door GT-R heading to BaT soon.